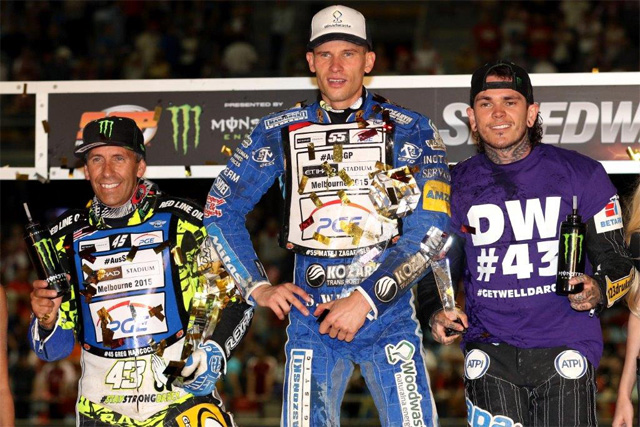 The Ljubljana-born rider took a ride back to the pits in an ambulance after Aussie champion Jason Doyle dived hard under Nicki Pedersen in heat 18, catching the Dane‰Ûªs front wheel. The triple world champion fell hard, taking Zagar with him.

Pedersen walked back to the pits unaided, but withdrew from the meeting with a suspected neck injury. Zagar emerged from the ambulance and showed incredible steel to win the re-run.

After finishing behind world champion Greg Hancock in his semi-final to reach the last four, Zagar rounded the American legend in superb style to claim his third career SGP win and move on to 81 championship points. This puts him one behind Hancock in third and four short of Nicki Pedersen in second.

An incredible 18 points from Great Britain‰Ûªs World Championship leader Tai Woffinden means he will take some catching, as he holds a 24-point lead at the summit with four rounds to race.

But Zagar is firmly in the medal hunt, even if scoring points was the last thing on his mind following his fall, which left him with abdominal pain and headaches.

‰ÛÏWhen I was sitting on the track, I had other worries about my health, not where I was going to finish in the end." Zagar said. "Of course it was a tough night and I‰Ûªm lucky I didn‰Ûªt do some serious damage. I have big aches in my belly and I‰Ûªll have to get that checked out later.‰Û