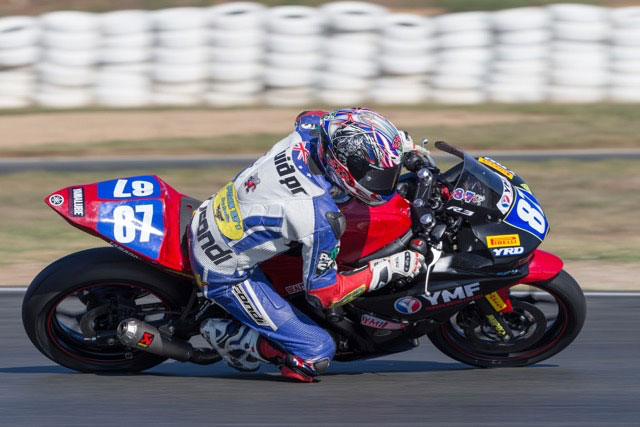 After a five minute warm up session this morning, it was straight into racing for the YMF R3 Cup competitors, showcasing their talents and manoeuvring their Yamaha machines around the tight and technical Wakefield circuit, for a total of two ten lap races today.

The second race of the weekend saw Zac Levy on his Yamaha R3 machine start from pole position, but it was Hunter Ford who leapt off the grid in race two, leading the pack for the first lap, followed closely behind by second position holder Levy, while Callum Alderson held down third - Ty lynch and Aidan Hayes rounding out the R3 Cup top five.

By lap two, Ford‰Ûªs lead came under fire, as second placed Levy tried to manoeuvrer around the race leader - but Ford was able to maintain his position and keep Levy‰Ûªs Yamaha at bay.

With little change to the field in the proceeding laps, Ford managed to maintain his lead, but was still locked in a tight battle with Levy and Alderson, who followed closely behind in second and third places respectively.

With two laps remaining, spectators were kept on their toes, as Levy finally managed to sneak past Ford and take the race lead, relegating Ford to second position, while Alderson remained strong in third.

When the last lapboard was shown, positions remained unchanged, and it was Levy who crossed the finish line victorious, followed by Ford in second, while third was snatched up by the youngster Alderson. Hayes and Lynch crossed the line in fourth and fifth positions respectively.

When bikes left the grid for the second time in race two, YMF R3 Cup saw a change in race leaders, as Levy jumped off the start line first, with Ford following close behind, while Alderson once again slotted in to third position.

However, Ford was determined to stay close to the rear wheel of Levy, not letting the Yamaha out of his sight, as the top five battled to make up precious positions - Levy, Ford, Alderson, Lynch and Hayes all within seconds of each other.

It was Alderson who put on an outstanding performance in the final R3 race, managing to execute a pass on Ford for second in the approach to lap three, setting up an epic fight to the finish line.

Despite Alderson making his way to second, the star was not prepared to settle ‰ÛÒ the Victorian taking full advantage of front-runner Levy‰Ûªs slipstream, and managing to make the pass for the lead as bikes headed into turn one.

With three laps remaining, Levy began to re-apply the pressure on new race leader Alderson, and with a trifecta on his mind, Levy snatched back the race lead with time to spare.

When riders received the last lap board, Levy had pulled a comfortable gap on Alderson in second, while Ford and Lynch continued to battle for the remaining podium position.

However, when the chequered flag flew, it was Levy who took the final race win, ahead of Alderson in second, while Ford took out third, leaving Lynch and Hayes in fourth and fifth places respectively.

Levy, who managed a trifecta in the YMF R3 Cup, in what was the classes ASBK debut, shared his feelings moments after stepping off the podium.

‰ÛÏI am feeling ecstatic. Taking three from three is the best possible outcome that we could have had from this weekend, I am lost for words really,‰Û