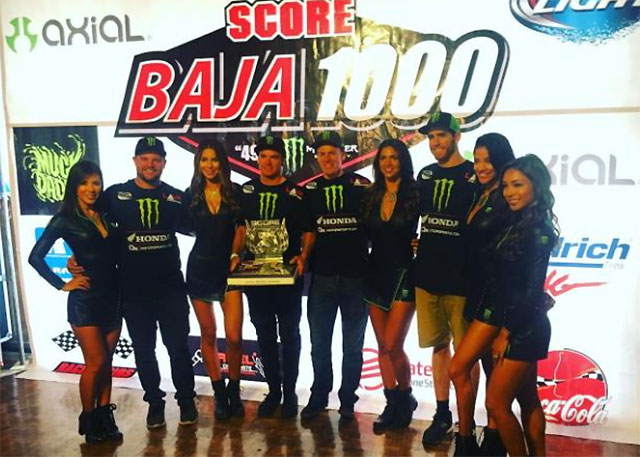 Covering over 1287 kms of challenging terrain and racing from 16-20 November; the Baja 1000 marks the final round of the SCORE international four-race series which includes; the SCORE Desert Challenge, the SCORE San Felipe and the Baja 500.

The Ox Motorsports team effort includes an ‰Û÷A‰Ûª and ‰Û÷B‰Ûª team; with six riders in total, three for each team. The A team bike carries the front plates 1x which refers to the defending champion of the ‰Û÷Pro Moto Unlimited Class‰Ûª in the SCORE International World Desert Championship.

The Baja 1000 is the teams‰Ûª premier and final event for the season. The B team bike has the 3x front plate which represents the third placed team from last year‰Ûªs series.

Having ridden in Udall‰Ûªs team at Baja in 2015, Stokie headed up the B team and placed 4th. Stokie returned this year with the goal to take home the win. 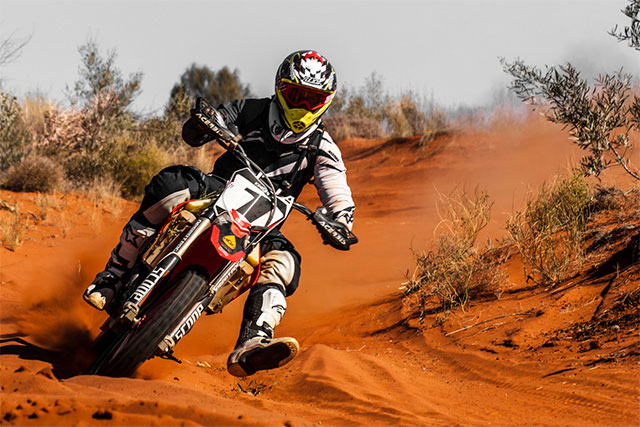 Daymon Stokie in action at Finke.
Initially set to ride in the ‰Û÷B‰Ûª team again this year aboard the 3x machine; Udall had a pre-race crash resulting in a broken collarbone a few nights before the big race.

This saw Stokie move up to defend the championship aboard the Honda CRF450X 1x machine and take on the difficult task of filling in for Udall who was slated to ride the night section of the grueling race.

Udall‰Ûªs championship winning Ox Motorsports team rode the Honda to a time of 18:16:43 and an average speed of 46.75 mph which saw them take the overall win. In the Pro Moto Unlimited Class, they were 1st of all motorcycle classes and won the series overall.

After meeting in 2015 while competing at the Tatts Finke Desert Race; Udall saw Stokie as a worthy addition to his team Ox Motorsports/Honda Squad and made the call to have him venture to the United States to compete.

Finke is a multi terrain two-day race for bikes, cars, buggies and quads run from Alice Springs to the small Aputula (Finke) Community, a familiar ride for Stokie who calls Alice Springs home.

Stokie is a member of the Desert Edge Motorcycle Team (DERT) here in Australia and has seen his fair share of top-ten finishes at Finke.

A step up for Stokie from the Finke circuit; he has become the first ever Australian to ride in a team to victory in the Baja 1000 dessert race.

Celebrating the win and his 26th birthday all in the same night, the Baja 1000 has been an extremely sucessful campaign for Stokie and the team.