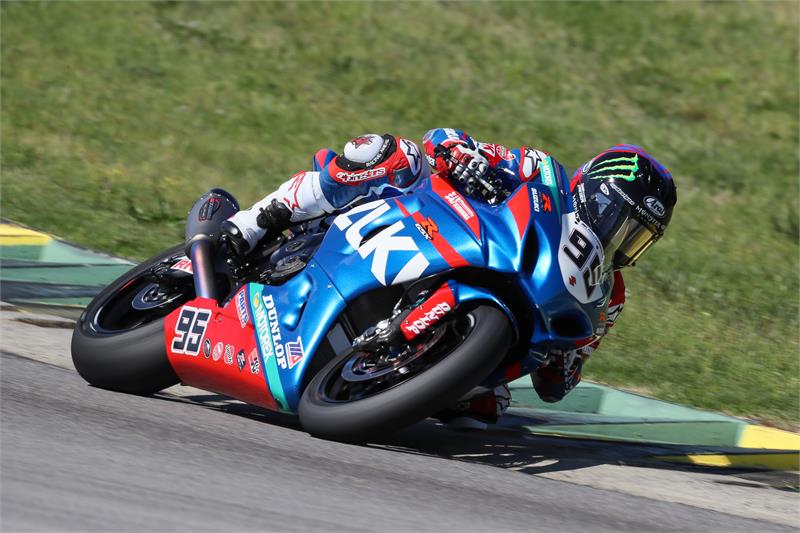 In Sunday‰Ûªs Superbike race one both Hayden and Elias scored podium finishes on their Yoshimura Suzuki GSX-R1000s and in race two Elias collected a second podium of the day with third as Hayden finished fourth.

Saturday was highlighted by both Yoshimura riders using the power and handling of their Suzuki GSX-R1000 Superbikes to earn front-row starts.

At the end of the weekend Hayden came away with more points than his Spanish team-mate and now sits third in the standings, 21 points out of the series lead. Elias is fourth, just five points back from Hayden.

On Saturday it was an impressive Superpole qualifying session for the Yoshimura Suzuki riders. They both qualified on the front row with Hayden‰Ûªs 1:24.545 lap time putting him second and Elias rounding-out the row with a time of 1:24.662.

"I'm pretty happy," Hayden said after Superpole. "I haven't always been too strong here, but this week I have a great feeling with the bike. This morning I did a lot of laps in the 25s, so I feel good for tomorrow. Qualifying wasn't the greatest, because it's kind of difficult to get a rhythm, and there's a lot of guys out there trying to get a tow. It makes things challenging, but I'm happy with the front row. A good start here's important - it's a tough place to pass."

Race one was an intense battle start to finish with Hayden finishing second by just .307 of a second while Elias took third, giving the team two out of the three podium spots.

In race two it was Elias‰Ûª turn to finish in front of his team-mate. The former Moto2 World Champion led much of the first half of the race and was in the hunt for the victory until the final lap. His third-place result in the second leg was the more impressive of Elias‰Ûª two podium finishes as race two's pace was faster - four seconds quicker over the 25 laps.

"The position was the same as before," Elias said of his second third-place finish. "But before I wasn't satisfied, but now I'm really satisfied with this position."

The picturesque Elkhart Lake, Wisconsin‰Ûªs Road America will next host the MotoAmerica series on June 3-5th.