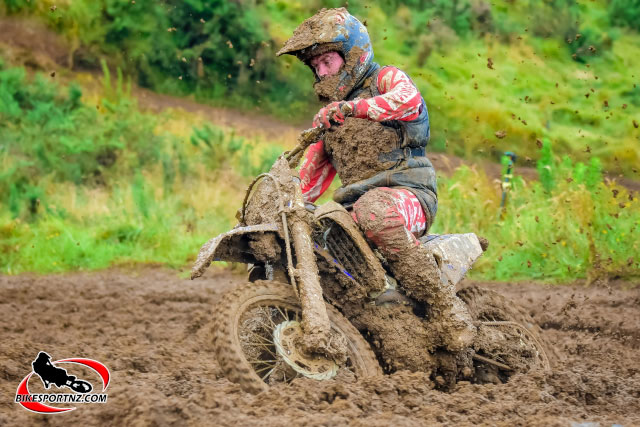 Mangakino's Kayne Lamont rose to the challenge, turning disaster into victory in a "watered down" King of the Mountain motocross event in Taranaki, New Zealand, at the weekend.

With high winds and frequent rain squalls transforming an otherwise perfect track into a treacherous mess, organisers were forced to reduce the senior programme at the popular Barrett Road circuit, just outside New Plymouth, cutting it from three races per class to just one.

Taranaki Motorcycle Club officials also abandoned any plans to race the senior King of the Mountain feature race from which the event gets its name.

This meant that every rider who won a race would also be the champion in their respective class and, with races reduced from 10 laps to just six, it added importance and intensity to each drop of the start gate.

Lamont took his Altherm JCR Yamaha Racing Team YZ450F into the front from the start of the glamour MX1 race and, although slippery conditions had also pushed lap times out beyond the two-minutes and 30 seconds mark ‰ÛÒ an increase of more than a minute over the best times achieved on the same track by the juniors just 24 hours earlier ‰ÛÒ the race was still going to take more than 15 minutes to complete.

This was a tough proposition with the bikes weighed down by mud, hand grips becoming greasy and with goggles fogging up.

When Lamont stalled his bike just a handful of corners into the race, Mount Maunganui's Rhys Carter (Kawasaki KX450F) pounced and took the lead. Then, at about the halfway stage, Carter slid into a bank and was spat off his bike, allowing Lamont to snatch the lead back.

These two riders continued to battle each other and the elements but the gap remained the same to the finish, Lamont getting the win by 20 seconds from Carter, with Raetihi's Richard Horne (Yamaha YZ450F) claiming third, nearly four minutes further back.

"I could see that Rhys had fallen off and knew I had inherited the lead, but I couldn't afford to back off," said the 23-year-old Lamont.

"When my goggles fogged up, I tossed them away, and, with mud in my eyes, I started making mistakes. But I got there in the end," said the former national champion.

With Taranaki set to host the New Zealand Junior Motocross Championships at Barrett Rd on April 22-23, Saturday's junior day drew a huge number of entrants as riders were keen to familiarise themselves with the new layout and this explained why riders had come from as far as Invercargill in the south to Auckland in the north and also from Australia.

The rider who travelled the farthest was Invercargill's Mitchell Weir and he made sure the effort paid off, winning the 8-11 years' 85cc class with a hat-trick of wins on Saturday.