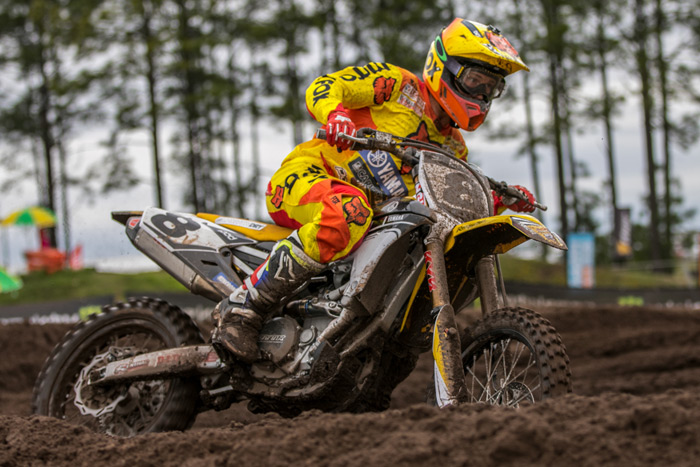 Practice and qualifying for the Monster MX1, Motul MX2, and Pirelli MXD class was ticked off the list in Coolum today, as the 2015 MX Nationals charges towards crowing it‰Ûªs 2015 Champions.

With riders, teams and spectators greeted with perfect 20 degree weather, the top riders in each of the championship classes, put down their fastest lap times, determining their pick of the grid tomorrow morning.

At the conclusion of the 20-minute sessions, it was a Yamaha pole position affair, with CDR Yamaha‰Ûªs Kade Mosig, Serco Yamaha‰Ûªs Luke Clout and GYTR Yamaha‰Ûªs Wilson Todd all posting the fastest lap times in their respective classes.

When the premier Monster MX1 class headed out for their free practice session today, crowds were treated to seeing the best guys in the business not only manage, but attack the notoriously rough Coolum Pines circuit.

With 20 minutes to get a feel for what Coolum will dish out tomorrow, the MX1 class took advantage of the ride time, putting down impressive lap times, and proving why racing tomorrow is going to be action packed.

Having taken the round win at Coolum earlier in the year, DPH Yamaha Racing‰Ûªs Lawson Bopping got to a flying start, putting down the fastest lap in practice (1:45.107), ahead of KTM Motocross Racing Team duo Luke Styke and Kirk Gibbs.

When the Monster MX1 qualifying session got underway, much like MXD, and MX2, the MX1 big guys looked to put down their hot laps early, and secure those top five positions that would see them put straight through to GoPro SuperPole tomorrow morning.

After only one lap of qualifying, CDR Yamaha‰Ûªs Kade Mosig put down the top lap time of 1:46.775, proving to the MX1 field that his recent form is no fluke at all.

However Mosig had his work cut out for him if he wanted to stop the hard charging series points leader Gibbs, who bumped Mosig for the fastest lap time after only five laps with a 1:46.080.

However at the conclusion of the session, CDR‰Ûªs Mosig was able to retaliate and snatch the number one position back from Gibbs, putting down an outstanding 1:45.854 lap time, ahead of Gibbs‰Ûª 1:46.080 hot lap.

Mosig, Gibbs, Monea, Townley, and Styke will now all take part in GoPro SuperPole, where crucial additional championship points will be on offer at 10:05am tomorrow morning. 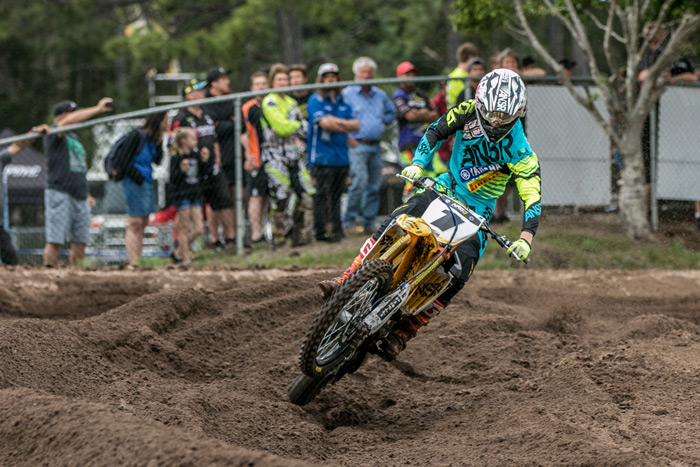 Luke Clout topped MX2 qualifying - Credit: Aaryn Minerds
With the Motul MX2 Championship set to be run and won at Coolum this weekend, when the 250 machines roared to life for their free practice session, championship contenders opted to take advantage of their additional track time.

When bikes hit the track for the practice session, Serco Yamaha‰Ûªs Luke Clout made his presence known ‰ÛÒ putting down the quickest lap time of 1:48.832, a time that no other rider was able to top.

The surprise speed in the 20-minute practice session came from Yamaha mounted Kyle Webster, who was second fastest this morning, ahead of red plate holder JCR Yamaha‰Ûªs Jay Wilson who was third fastest on track.

When the 20 minute timed qualifying session got underway, Clout once again got to a flying start ‰ÛÒ putting down a fast lap time of 1:48.515 - Clout did enough to secure the pole position for tomorrow, and will take the first pick of the grid in the morning.

Coming in a close second to Clout was Husqvarna mounted, and Coolum local Nathan Crawford, who recorded a lap time of 1:48.771, only .2 of a second shy of Clout‰Ûªs impressive speed.

JCR Yamaha‰Ûªs Wilson was once again well inside the top three, recording a lap time of 1:49.791 and securing third gate pick when the MX2 class lines up for racing in the morning.

Wrapping up the top final positions in the Motul MX2 qualifying today was Serco Yamaha‰Ûªs Jed Beaton who was fourth fastest on track, while Sony Action Cam Kawasaki‰Ûªs Takeshi Katsuya finished the 20-minute session with the fifth fastest lap time. 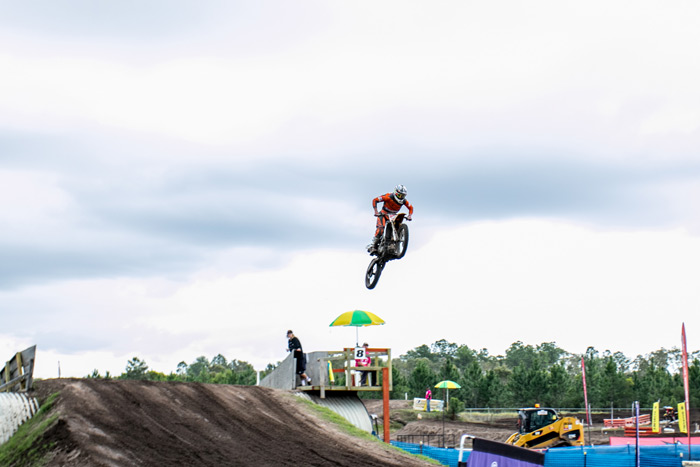 Wilson Todd airs out on his way to topping the MXD time sheets - Credit: Aaryn Minerds
When the Pirelli MXD Class headed out for the 20 minute free practice session this morning, all eyes were on the yellow 60th Anniversary edition GYTR Yamaha machine of Wilson Todd, who enters the final round this weekend with a 22 point lead on KTM‰Ûªs Jayden Rykers.

However, when bikes hit the track, it was Rykers who put down the fastest lap of a 1:48.218 ahead of Todd who was second quickest, while Yamaha mounted Toby Stevens wrapped up the practice session with the third fastest lap time.

When the Pirelli MXD timed qualifying kicked off, the stacked under 19‰Ûªs class fought to put down their hot lap early, with track conditions becoming tougher by the minute.

After only three laps of qualifying GYTR Yamaha‰Ûªs Todd recorded a lap time of 1:49.120, setting the pace for the rest of the Pirelli MXD field.

With Todd setting the qualifying benchmark, the focus shifted to those behind him. Closest title threat Rykers secured a fast lap time of 1:50.245, while Coolum local Bailey Coxon (Yamaha) put down a 1:51.815, and will take third pick of the grid when the class lines up for racing tomorrow.

For a full list of all the results from practice and qualifying head to www.mxnationals.com.au