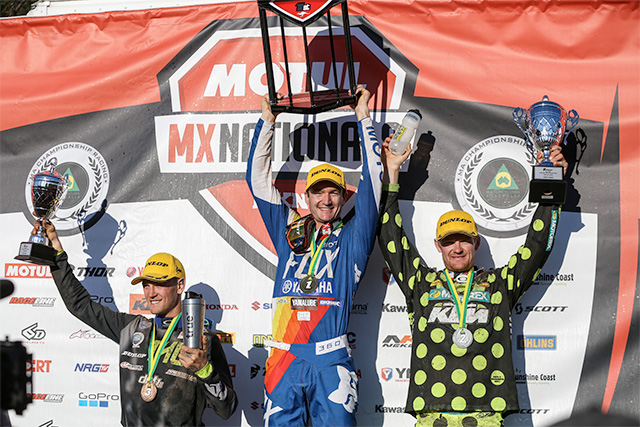 Yamaha has won the manufacturers cup in the majority of the championship classes contested throughout the 2017 Motul MX Nationals, winning the MX1. MX2, MXD, Women‰Ûªs and Vets 30-39 years in a dominant display from the ‰Û÷bLU cRU‰Ûª team.

With points tallied from each manufacturer represented throughout the series, it was Yamaha riders that tallied the most points in the major classes and showcased the high performance and track proven ability of the YZ range.

MX1 ‰ÛÒ 450cc
With Dean Ferris and his CDR Yamaha team pulling off one of the most comprehensive championship victories in history, Yamaha was always going to be a front runner in the MX1 division. Ferris racked up 17 race wins and nine round wins on his way to his second consecutive championship victory. Ferris only let three race victories from his grasp and he was never off the podium at any round in a year that will long be remembered by the racing industry.

DPH Motorsport‰Ûªs Kade Mosig also placed well throughout the year taking third in the championship making it a Yamaha 1-3 on the podium. Mosig was consistent all year and proved to be a valuable contributor for Yamaha at each and every round.


MX2 ‰ÛÒ 250cc
The Yamaha YZ250F has proved to be the bike to be on in the MX2 division with five of the top 10 riders mounted on the potent machine. With 10 race wins and five overall round victories coming from the likes of Wilson Todd (DPH Motorsport) and Mitch Evans (Serco Yamaha).

Jackson Richardson was also in championship contention until round eight where an injury took him out of the series.

There was also a strong privateer effort with Richie Evans finishing ninth in the series and being awarded the Jon Porter Award for the highest placed privateer rider, just ahead of fellow Yamaha mounted, Joel Evans in tenth.

MXD ‰ÛÒ Under 19
A 1-3 finish by Yamalube Yamaha Racing team mates, Cody Dyce and Cooper Pozniak as well as a strong performance by WBR‰Ûªs Hugh McKay saw Yamaha take the manufacturer points in the MXD division as well.

The three riders split seven race wins and three round wins between them in the eight round series and showed Yamaha‰Ûªs commitment to assisting up and coming racers in Australian motocross.

Yamaha also took the points in the Women‰Ûªs division with Maddi Brown taking the win on her YZ250F while Chase Mosig held the trophy high in the 30-39 Year Vets on his YZ450F.

‰ÛÏIt has been another sensational year for Yamaha supported teams and riders,‰Û