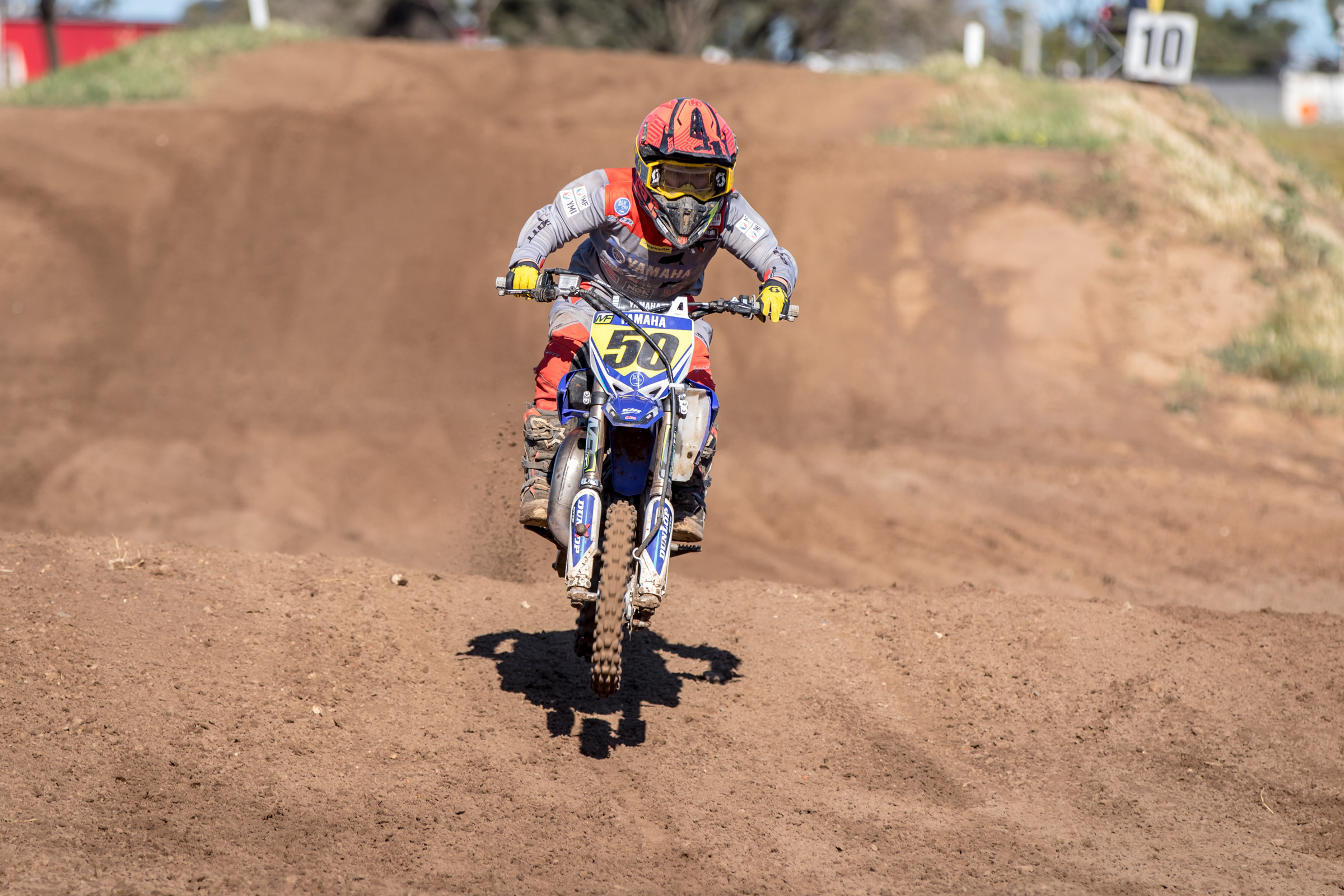 Woodrow got the ball rolling as he took the round and championship victory in the 10-12 years 65cc class
Sotocross tracks around the country were again back in action with state based events taking place in South Australia, Tasmania and Queensland.

With national events not back on the calendar yet, these rounds have been enthusiastically received by riders who are enjoying being back behind the start gate.

In South Australia, the third and final round of their state motocross championship was ran at the Gilman circuit just north of Adelaide in blustery conditions.

The SA YJR duo of Ryder Woodrow and Wil Carpenter were deep in championship contention in the three classes they contest and we keen to lay it all on the line at the final round. 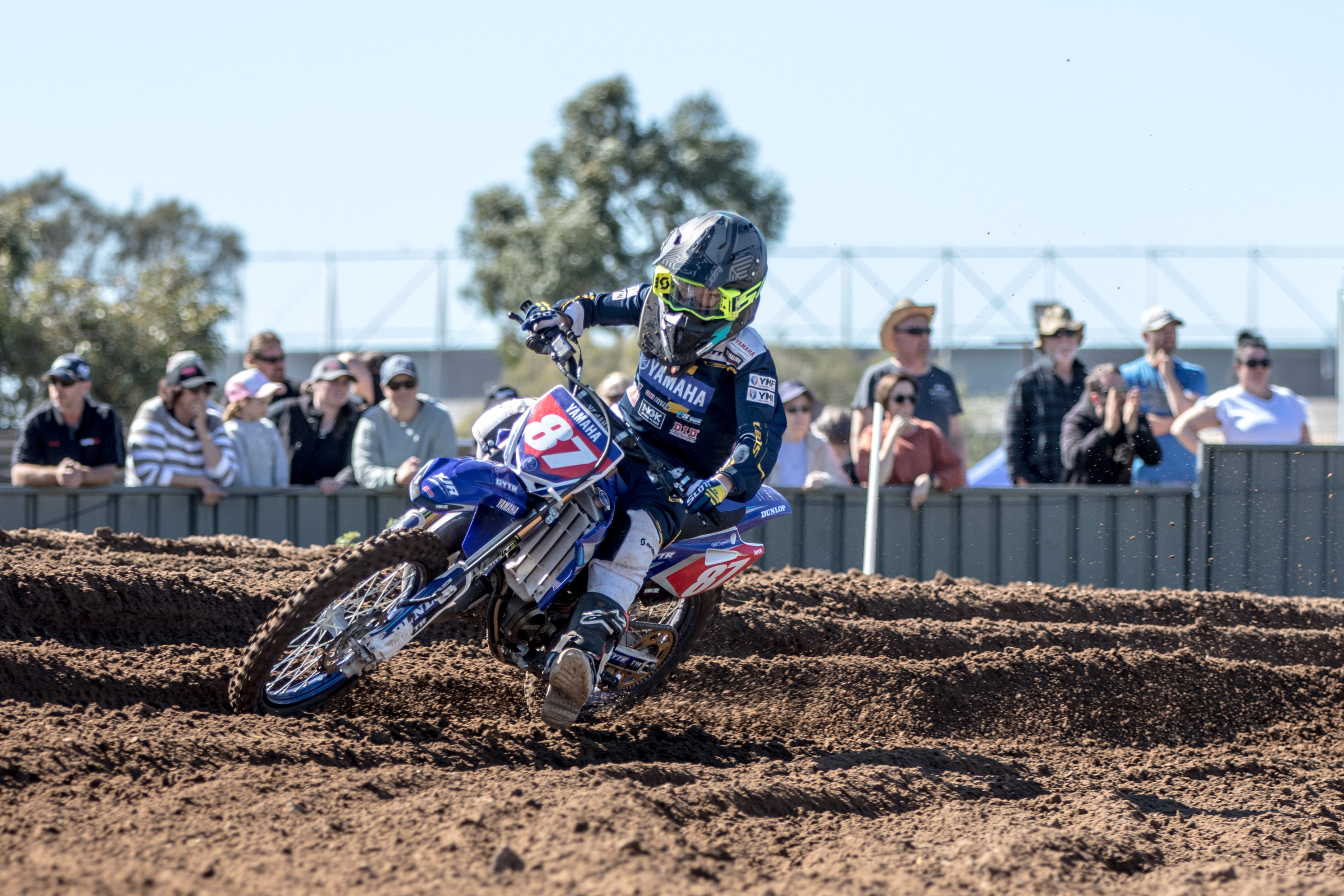 Wil Carpenter was also part of the podium action, taking second on the day in the 12-15 years 85cc class
Woodrow got the ball rolling as he took the round and championship victory in the 10-12 years 65cc class. Woodrow finished with 1-1-3 results to win the day and snare the all important championship victory.

He also raced the 9-11 years 85cc class and came home with 2-4-7 results to just miss the podium on the day, but he did enough to lock down second place in the championship and cap off a very successful championship campaign.

Team mate Wil Carpenter was also part of the podium action, taking second on the day in the 12-15 years 85cc class. Carpenter charged to 1-2-4 results at the final round, but it wasn‰Ûªt enough to take the championship win and he was forced to settle with second place.

‰ÛÏI‰Ûªm proud of how both guys raced, not just today but also over the championship,‰Û 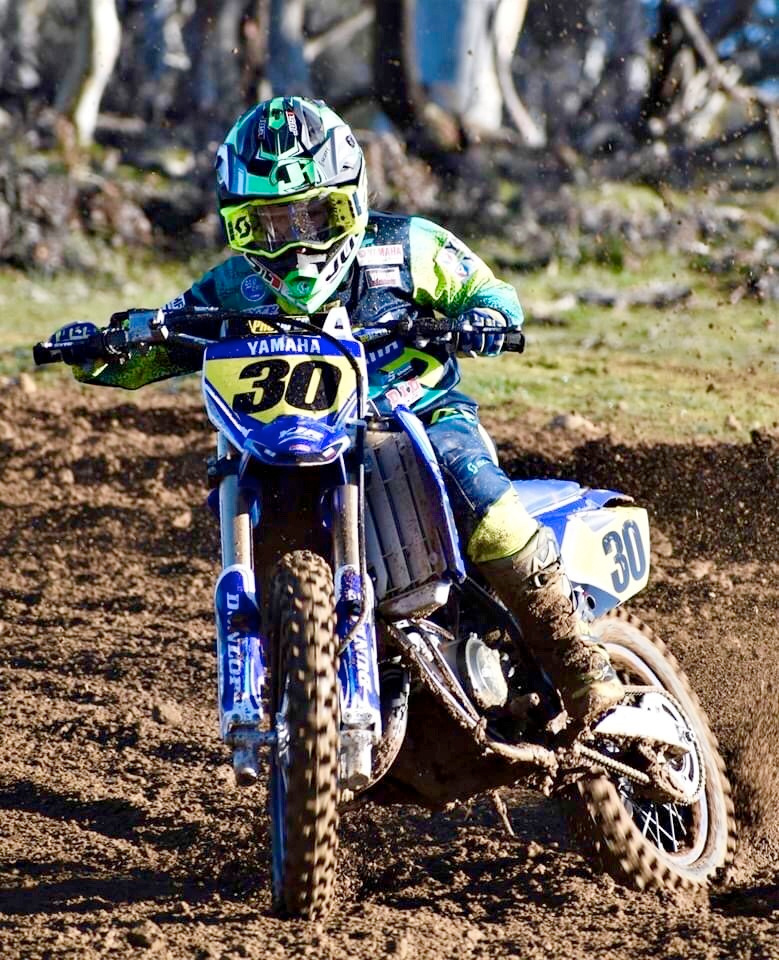 ennings finished a very consistent 2-2-2 results on the 85 but was able to trade wins with Ford on the 65 to finish with 2-2-1 results.
The boys further down south were back in action again for their third round of the Tasmanian Motocross Championship at St Helens. Jay Jennings and a recovering Angus Pearce were on track and doing their best to fly the Yamaha flag.

Jennings finished second in both the 10-12 years 65cc class and the 9-11 years 85cc division. Again, it was he and Cooper Ford doing battle out from in both classes and separating themselves from the pack.

Jennings finished a very consistent 2-2-2 results on the 85 but was able to trade wins with Ford on the 65 to finish with 2-2-1 results. Jennings currently lies in second place in each class and there is one round remaining in the championship.
Angus Pearce made a ginger return to racing on the weekend after his big accident a month ago. Clearly not 100%, Pearce was determined to at least get back on track and represent his team and sponsors. He only raced the 13-16 years 125cc class and finished up just outside the top 10 for the day but showed he can still match it with the best with a second place moto finish in race two.

‰ÛÏJay and Cooper are a step above the other riders in the Under 12 group and Jay maybe closed the gap a little on the weekend. It‰Ûªs something we have to work hard on as Cooper is racing exceptionally well, but we are determined to continue improve at each and every round.

‰ÛÏAngus just wanted some track time and in a season with not many races left, he made a last minute decision to compete on the weekend. he will take some time to get back to full health and full speed, but I‰Ûªm confident he can do that quickly,‰Û 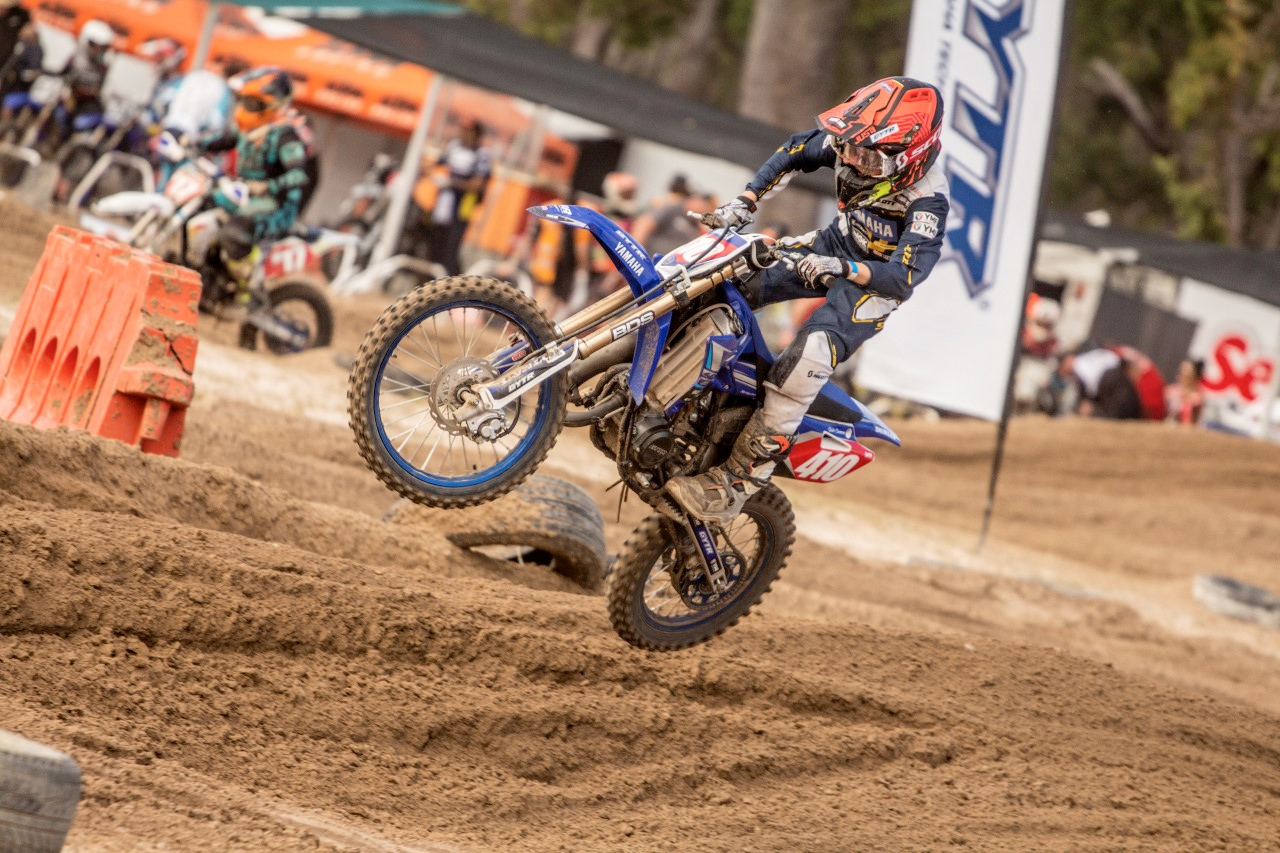 ake Cannon was in top form on the weekend and adapted well to the sandy conditions.
In the Sunny State, riders coming off the back of three rounds of the Sunshine State Series, to their attention to the one and only round of the Queensland Motocross Championship which was held at the sandy and often challenging Hervey Bay track. It is one of the few sand based tracks on the east coast and always makes the riders work hard for their results.

The QLD YJR team were back to full strength as Jackson Camilleri joined Jake Cannon after missing the lead up events due to a collarbone injury.

Jake Cannon was in top form on the weekend and adapted well to the sandy conditions. Cannon finished the day with 1-1-2 results to win the 12-14 years 85cc class on his YZ85. He looked good from the moment he hit the track and regardless if the track was smooth or whoop infested, Cannon handled it superbly and was the winner on the day.

For Camilleri, it was a tough track to return to racing as it is such a demanding circuit. Jackson just missed the podium in the 15 years 250cc class with 2-4-6 results, the last with a fall while in second place, while some crashes on the 125 saw him finish sixth.

Other Yamaha supported riders did well with Zac Watson claiming third in both the 15 years 125 and 250cc while Charli Cannon again showed the boys how it‰Ûªs done on her way to third place in the 13-14years 250cc class. 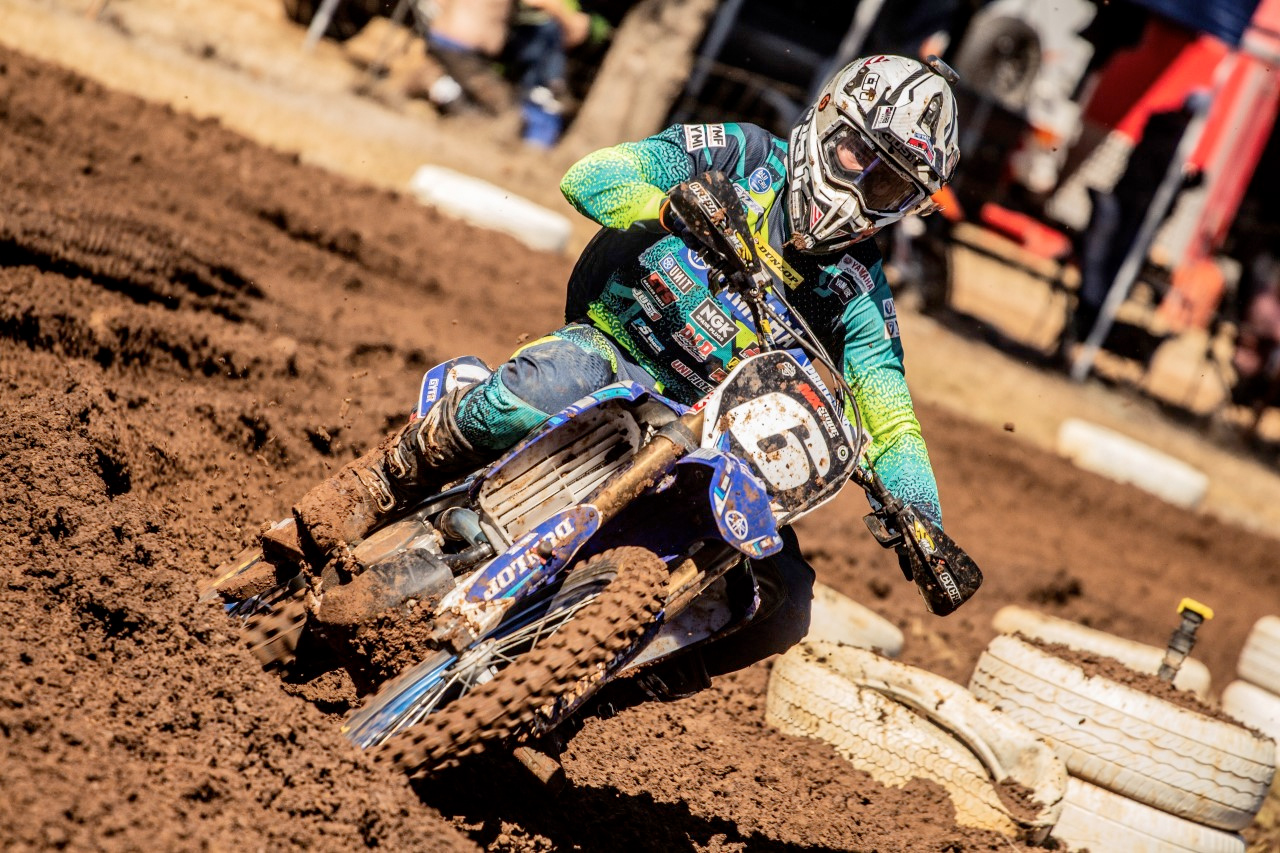 Wilson took the race win and with it the Queensland Championship over Waters by virtue of a better finish in the final race.
In the senior divisions, all eyes were on the MX2 class with another star-studded field. The Yamaha trio of Aaron Tanti, Jesse Dobson and Jay Wilson were up against Todd Waters as well as host of other up and coming hot shots.

After the first two races, five points separated Tanti, Waters and Wilson ‰ÛÒ in that order. As the last race blasted off ‰ÛÒ the running order was Wilson, Waters and Tanti which would have seen a three way tie for the championship if they were to cross the finish line in that order.

Just before the half way point, Tanti made a mistake and dropped to fourth place, leaving Wilson and Waters to fight it out with the gap around three to five seconds as they charged through lapped traffic.

In the end, Wilson took the race win and with it the Queensland Championship over Waters by virtue of a better finish in the final race.

Tanti was third for the day but despite the fall in the last race, showed his sand riding skills have improved significantly. Dobson held down fourth while Japanese rider, Kota Toriyabe took sixth making it four of the top six riders on a Yamaha.

Levi Rogers was unable to complete the weekend after injuring his arm in the first race but is expected back on the bike within a couple of weeks.