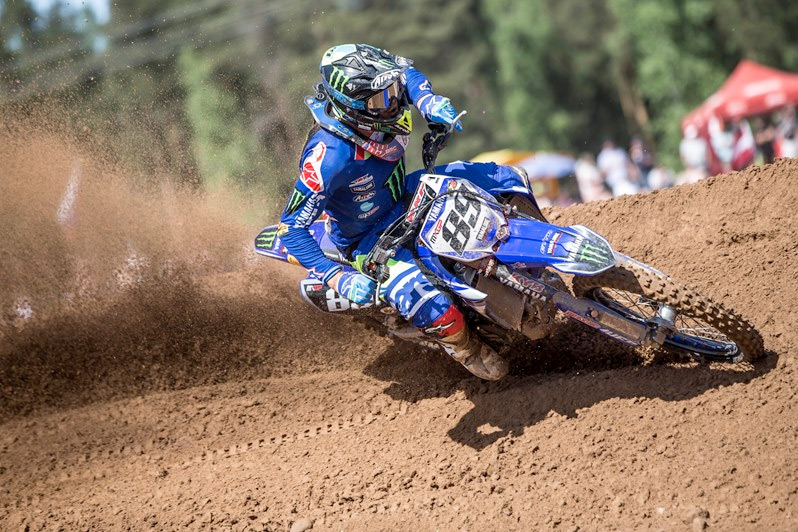 The traditional hard-packed and hilly circuit of Teutschenthal, Germany, will host the eighth round of nineteen in the 2018 MXGP series.

Monster Energy Yamaha Factory Racing's Jeremy Van Horebeek has almost returned to full strength following the Scaphoid injury he sustained in March and he is optimistic about making a return to the podium. Meanwhile Romain Febvre will be on damage control as he looks to nurse an injured right-arm home for as many points as possible.

The first ever round of the FIM Motocross World Championship that took place on the clay of Teutschenthal was back in 1971. It has since held 22 rounds, and on top of that, the 2013 Monster Energy FIM Motocross of Nations, an event that sits solid in the heart of Jeremy Van Horebeek as a member of the winning team - Team Belgium - on that epic weekend.

Van Horebeek currently sits seventh in this seasons' championship chase after a big crash at round two in The Netherlands resulted in a cracked Scaphoid. He needs 1-point on Glenn Coldenhoff this weekend to move up into sixth.

After connecting with another rider three-laps into Race 2 at the MXGP of Latvia last weekend, Romain Febvre fell heavily and injured his right arm. An enormous amount of pain and swelling had the 26-year-old fearing for the worst, although a specialist has confirmed that there are no broken bones. The pain and inflammation stems from the damage that has been caused to the tendons.

It will make riding uncomfortable and painful, which is unfortunate for the former World Champion who wrapped up his third ever grand prix win in the premier class - MXGP - at the circuit of Teutschenthal with a 1-2 finish back in 2015.

"I really like the track in Teutschenthal." Van Horebeek admitted. "It's definitely not an easy track, it's really hard-pack and rutty, but it depends how they prepare it or the weather, there are a lot of things that make the ground different every year there.

"My only concern will be that if the track is really hard and edgy that it puts a lot of stress on my wrist with all the jolting. I hope that a few more days of healing that it is better, it just seems to be one of those injuries that it is taking so long to heal. In saying that, it feels like it is getting better, so I am happy." 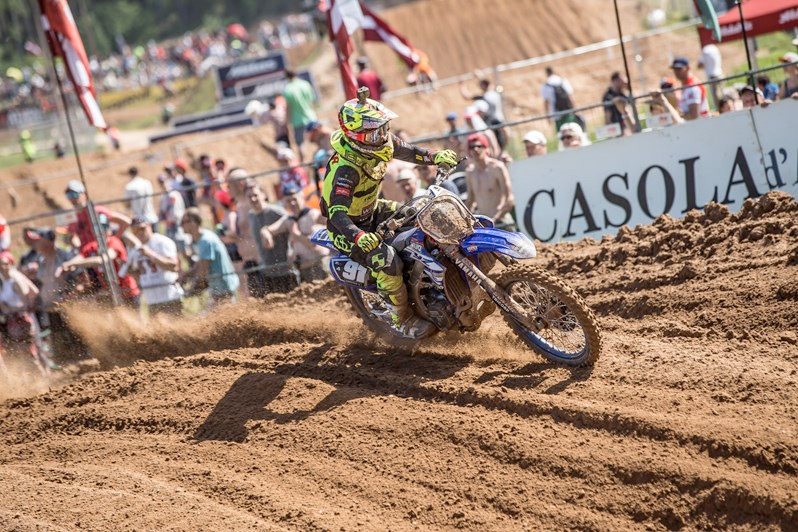 Wilvo Yamaha Official MXGP's Jeremy Seewer knows a top-five finish is on the horizon. Again, at the previous round in Latvia, the 23-year-old had the speed to battle for top-six finish, but is still in the process of developing his race craft inside the premier class.

The Wilvo Yamaha Official MXGP Team will be a one-man band this weekend with Shaun Simpson still on the mend. The Scot, who is still recovering from three fractured ribs and a chipped Ilium - an injury he sustained during qualifying at the MXGP of Russia on April 30th - is expected to be back on the gate for his home Grand Prix, the MXGP of Great Britain on the weekend of June 3rd.

"I am looking forward to racing in Germany." Seewer commented. "I am from Switzerland, but I speak German so I really like the fans there, and for some reason I really like that track.

"If the track is anything like what it was during the last times we raced there, it has my name all over it. Of course, all of the guys in MXGP are fast and they will be fast there too, but if everything goes to plan I think I will do well on this kind of track."

In MX2, excitement continues to mound. Kemea Yamaha Official MX2's proven podium contenders Jago Geerts and Ben Watson have uncorked bottles of champagne and set the bar over the previous two rounds and will both be aiming for the box this weekend. Watson is currently fourth place in the MX2 Championship Standings, while Geerts leapt from eleventh to seventh following his second-place finish at the previous Grand Prix.

Jago Geerts has been spotlighted as one of the next big stars in MX2 after his incredible performance in Latvia where he celebrated his first ever Grand Prix podium finish. The 18-year-old star-on-the-rise will be a feature guest on the MXGP Studio Show on Saturday 19th May. The show will be broadcasted LIVE at 13:00 Central European Time (BST+1) on www.mxgp-tv.com.

The Kemea Yamaha Official MX2 team will also welcome a new addition this weekend in the form of Anthony Rodriguez. Born in Venezuela, Rodriguez moved to the United States of America in 2009 with big ambitions to be one of the best motocross riders in the world. The 22-year-old has just completed the AMA East Coast Supercross season, in which he finished ninth overall in the 250cc class with his best race finish being a fifth-place in Minneapolis. The MXGP of Germany this weekend will be the first time he lines up for an outdoor motocross race this year.

Joining the MXGP, MX2 and WMX teams in the paddock and fresh off of his first ever race-win and podium finish, team MJC Yamaha Official EMX125's Thibault Benistant will line-up along side his teammate JÌ¦rgen-Matthias Talviku for the fourth round of the EMX125 Championship.

Teutschenthal is located in the east of Germany, 162km South West of the country's capital Berlin, and only 134km North West of the border for the Czech Rebulic. The 'Talkessel' circuit, has a rich history and is a track that embodies plenty of elevation and skittish clay ruts and bumps.

It is relatively stony and has an awkward consistency in terms of compound. www.MXGP-TV.com will be broadcasting the Grand Prix LIVE this weekend starting with the MXGP Studio Show featuring Jago Geerts.