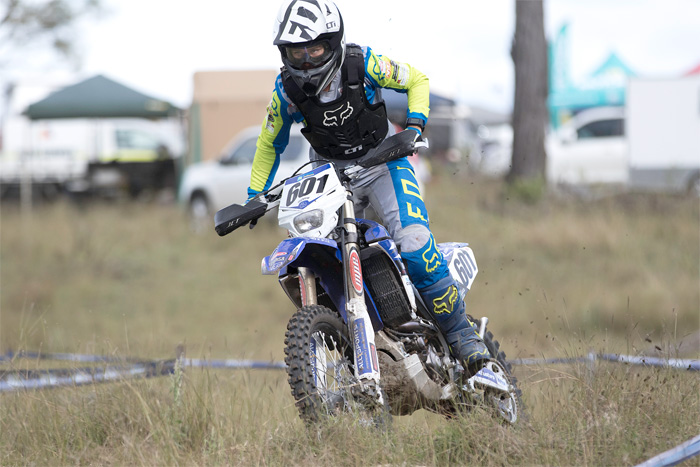 With Active8 Yamaha‰Ûªs Beau Ralston out with injury and Wil Ruprecht having a tough weekend due to a heavy fall, it was left to the Yamaha supported riders to fly the ‰Û÷bLU cRU‰Ûª flag at rounds five and six of the Australian Off Road Championship.

And they did exactly that! Jemma Wilson maintained her unbeaten record so far this season with another dominating performance take both round wins on Saturday and Sunday in the Women‰Ûªs division. On board her YZ250FX, Wilson was again unstoppable in perfect conditions and now has built up a comfortable 18point lead in the championship over her nearest rival.

Old timer and former AORC champ, Kirk Hutton, dusted off the nylons again and decided to have a ride at the Gympie round with it being just 90 minutes up the road from his Brisbane base. Now a full-time plumber, Kirk showed he still knows his way around the bush taking the Veterans double, winning both Saturday and Sunday.

Hutton isn‰Ûªt contesting the entire series, much to the relief of his competitors, but the rare race at AORC shows he still has what it takes.

Scott Keegan jumped up into E1 (250cc) contention after a successful weekend at Gympie. Now working with the Snap Fitness Yamaha team, Keegan landed in second spot on Saturday and then went one better on Sunday to take the class win. The top three in the E1 class are only separated by five points and all are inside the top 10 outright so they are showing a good turn of speed on the 250cc machines.

Michael Driscoll also had a good weekend taking second place in the EJ (U19s) category to go with his class wins at the opening round. Driscoll has taken exceptionally well to off road racing caper and holds a six-point lead in the class after the Gympie event.

And South Australia‰Ûªs Riley Graham netted his best result at an AORC in the premier E2 (450cc) class taking home a third each day and holding down third in the E2 championship. Graham has stepped up to the E2 class this year after a few seasons in the E1 division and has adapted extremely well to the bigger capacity machine and each weekend sees an improvement in his racing.

One spot behind Graham was Stefan Granquist in fourth place in E2. Granquist continues to produce consistent performance at each round and on every surface with the Gympie round proving no exception.

‰ÛÏIt was pleasing to see a variety of riders step up on the weekend and achieve some great results,‰Û