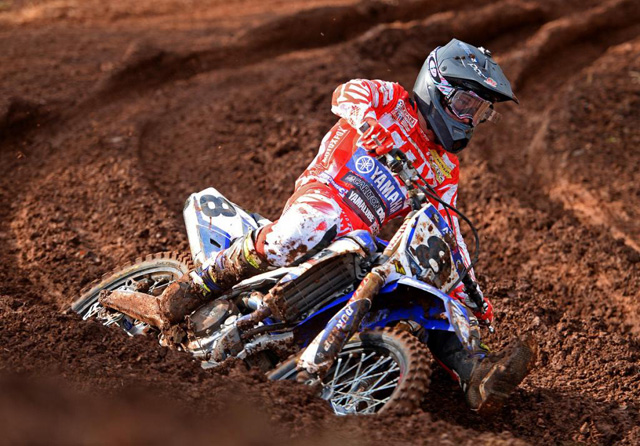 For the second time this season, Yamaha riders have won all four classes contested at a round of the MX Nationals.

Round nine of the championship hit the red rolling clay of Toowoomba's Echo Valley circuit and it proved to be a happy hunting ground for Yamaha with Kade Mosig, Jay Wilson, Wilson Todd and Hunter Lawrence all riding their YZ's to victory lane.

Kade Mosig dominated proceedings in the MX1 class on board his CDR Yamaha YZ450F taking both moto wins in an impressive performance from the fast improving Mosig. The successful day saw him climb to second in the points with one round remaining.

Jay Wilson extended his lead in the MX2 championship taking his first round win of the year with a 3-1 performance on his JCR YZ250F. Wilson now sits 21 points clear of his nearest rival with the Coolum grand finale on this weekend.

Wilson Todd carries a 22 point lead into the final round after his round victory in Toowoomba in the MXD category. Todd raced well for his 1-2 results on his GYTR Yamaha YZ250F and his consistently put himself on the podium throughout the championship.

The MX Rookies were featured at the Toowoomba round for the third time this season with Hunter Lawrence again showing why he is Australia's best junior talent. He dominated the day with 1-1 results and now has his sights set on a repeat at his home track of Coolum this weekend.

"Toowoomba was another successful day for Yamaha and our race teams," stated Yamaha Motorsport Manager, Ray Howard. "We had similar success at the Appin round earlier in the year and to clean sweep a second round this year is a credit to the riders and teams involved.

"Yamaha Motor Australia have a long and proud racing history and success like this underpins the quality and performance of our YZ range," Howard added.