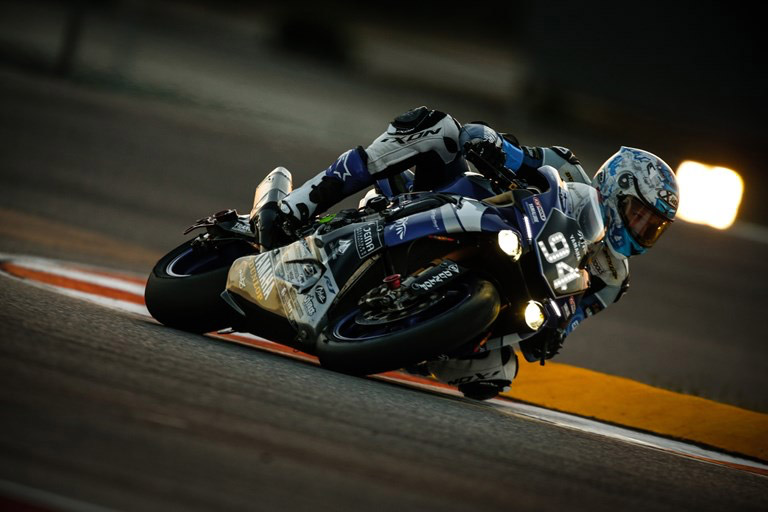 After a strong week at the AutÌ_dromo Internacional do Algarve, the GMT94 Yamaha Official EWC Team rode their Yamaha YZF-R1 to a stunning victory after a sensational battle at the 12 Horas de PortimÌ£o that came down to the wire.

This morning, as the clock hit 09:30 local track time, 30 riders ran to their bikes across the Algarve International Circuit's long straight under the hot Portuguese sun, to start 12 hours of non-stop endurance racing action.

GMT94's first rider, David Checa had a slightly cautious start from fourth on the grid to allow his tyres to warm up before putting the hammer down. Once he had brought heat into his Dunlops he joined the five-rider group fighting for the lead. He used the nimble character of the Yamaha YZF-R1 to the fullest and went on to take over the lead shortly before he came in for a quick stop to hand over the bike to teammate NiccolÌ_ Canepa.

The Italian re-entered the race in seventh position and rode a strong stint back to first place before letting Lucas Mahias take over, who also kept the YZF-R1 solidly in the lead.

Though the race was not without challenges in the form of strong wind, sweltering heat during the afternoon and a quite big high sider, which was masterfully saved by Checa, the GMT94 team managed their stints perfectly. They kept their pace high every single lap, to keep the edge over their closest rivals for most of the race and gain ten points after the eight-hour mark.

Their perfectly calculated pit stop strategy was ultimately key to taking today's victory. As the sun went down and the temperatures dropped it was front man Checa, who took over the number #94 bike from Mahias. The Spaniard re-entered the track in second place, having done one stop more than the Suzuki Endurance Racing team that was leading the race, and rode a brilliant double stint to close down the gap to first place.

What followed was a hot battle in the dark for victory in the final thirty minutes of the race, with both riders setting laps into the 1'46s after more than eleven hours of intense racing. Checa's performance was impeccable in the climax of the race as he used all of the Yamaha's strong points to the maximum and took the lead with 14 minutes left. The experienced rider placed his overtaking moves on backmarkers to perfection to keep the edge in this high-speed chase and took the best victory of his career with a 0.081s advantage over the line.

The YART team had a difficult start to the race from second place and entered the first corner of the first lap at the back of the pack, but this only fueled Broc Parkes' motivation. As his confidence grew he worked his way up to third before returning to the pits. Teammate Marvin Fritz and IvÌÁn Silva were next to take the YZF-R1 out on track and displayed a competitive pace to remain in contention for a podium finish.

They secured eight points after hitting the eight-hour mark in third position but bad luck struck an hour later. Race Direction demanded the team to make a pit stop to make sure the bike didn't exceed the noise limit. Once Silva returned to the track YART had fallen back to sixth, which meant the end for their podium challenge, but they kept dropping consistent lap times to ultimately score a well-deserved fourth place.

After the victory GMT94 Yamaha secured the maximum of forty-five points: ten points for leading the way at the eight-hour mark and thirty-five points for the win. The YART team took away a total of twenty-nine points for their third place after eight hours and fourth place over the full race distance. The teams look forward to the next round, the Suzuka 8 Hours, held on July 29th - 31st at the Suzuka circuit.

"What an incredible race! We are so, so happy, because the race was decided by a big battle with last year's championship winner." Christophe Guyot - GMT94 Yamaha Official EWC Team, Team Manager commented. "Our YZF-R1, tyres and riders were fantastic today and we can be very happy with our pace on the track, but the way David rode in the last stages of the race was even surprising to me.

"After more than eleven hours of racing he still set superfast lap times and made the team so proud to take the win by 0.081s. The battle in the last minutes of the race was great, not only for us and Yamaha, but also for the sport, because it shows just how exciting endurance racing can be and how close the championship is. Winning an endurance race is never easy, but today we did it with a photo finish," he concluded.