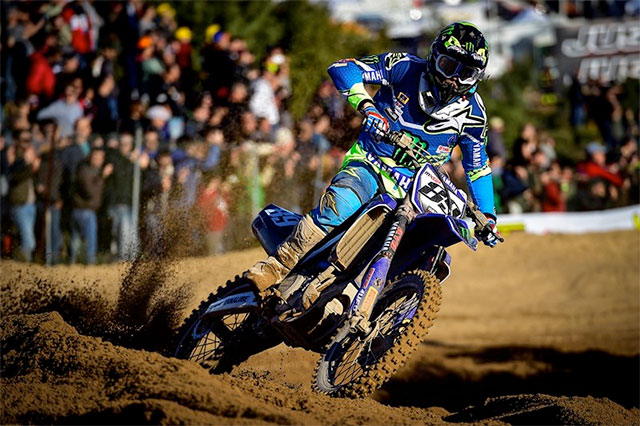 Monster Energy Yamaha Factory Racing's Jeremy van Horebeek has already thrown his name on the table as a solid challenger for the 2017 MXGP crown.

The Belgian took second at the first of three rounds of the International Italian Championship, which took place in the whooped out sand of Riola, Sardinia, Italy, on Sunday.

Heavy rain made the typically soft and loamy sand of Riola rough and brutal, which for many riders was a struggle especially with the conditions serving as the season-opener. In the two races that took place Van Horebeek was on the pace onboard his works YZ450FM as he kept the eight-time FIM Motocross World Champion Antonio Cairoli in check for two second place finishes.

"It was a really good day today," Van Horebeek said, "I was really surprised that it was so easy. To be honest I was a bit lost in the Free Practice because I was back in the sand after being in Spain on the clay and hard-pack tracks for the last three weeks, but then in the races I just found my rhythm, I was not even close to going over the edge I was just riding at a comfortable pace, finding smooth and good lines." 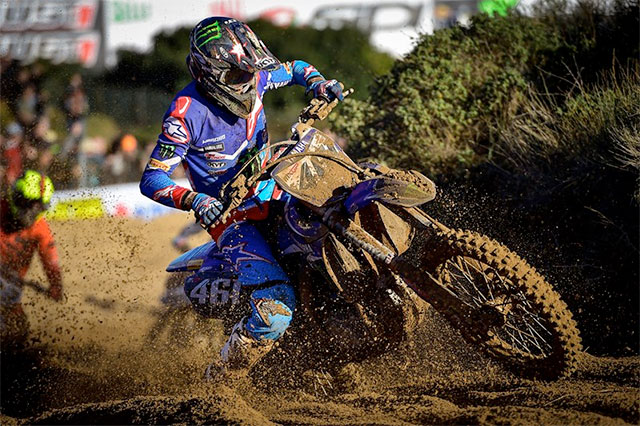 Romain Febvre had a small crash but has reported that he is OK
Monster Energy Yamaha Factory Racing's Romain Febvre was also running a hot pace in the first race where he finished in fourth, right on the heels of the defending world champion Tim Gajser, but later fell victim to the ruthless nature of the circuit.

"I had a small crash on the second lap, and then I was coming back through the field when I decided to try and jump some breaking bumps. I got kicked sideways, it was almost 90 degrees sideways so it was too much to save, and I crashed. I hit my head, and strained the muscles in my neck, otherwise, I am okay."

Wilvo Yamaha Official's duo of Shaun Simpson and Arnaud Tonus debuted their YZ450F's in the premier class with both riders making some solid progress throughout the course of the day.

"We haven't spent a lot of time in the sand," Simpson said, "although I didn't feel too bad on the bike, we just struggled with set up a bit, but that is what we use these races for, to prepare." Tonus agreed, "it was not a bad day, we just haven't been in the sand enough, but we made some solid progress."

As the grand prix of Qatar and the commencement of the 2017 FIM Motocross World Championship draws ever closer, these pre-season races are essential to the MXGP riders and their preparation for what is bound to be an action-packed season.

Van Horebeek and Febvre will be back on the gate at round two of the International Italian Championship at Malagrotta next weekend, February 5th, while Simpson and Tonus will be racing in England at the Hawkstone International MX.