Yamaha Dominate Coolum With 4 out of 5 Class Wins 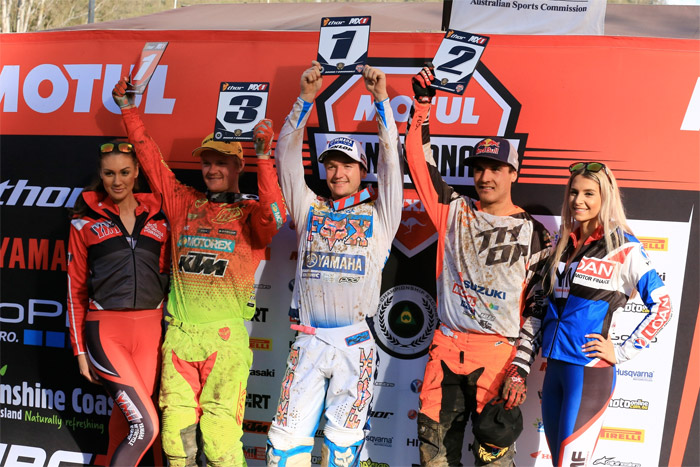 Yamaha Racing turned in another red letter day at round seven of MX Nationals at Conondale with Yamaha supported riders winning all three championship classes with Dean Ferris taking MX1, Jed Beaton MX2 and Mitch Evans on top of the MXD division.

And just to put the icing on the cake, Cameron Taylor notched up the win in the Vets over 40‰Ûªs.

CDR Yamaha‰Ûªs Dean Ferris won the round with his 2-1 results and gain another handful of points in the MX1 championship to now sit just six points back of series leader Kirk Gibbs. Ferris also took the win in the Superpole event to be the fastest qualifier to stamp his authority on the day.

DPH Yamaha‰Ûªs Jed Beaton landed on top of the MX2 podium after finishing with 1-2 results on his YZ250F. Beaton is a proven performer at the Conondale circuit and the wet and rutty conditions suited the Victorian as he put on a master class in the final MX2 moto. Beaton now sits second in the MX2 championship, just seven points from the lead.

Yamalube Yamaha Racing‰Ûªs Mitch Evans took a perfect 1-1 in the two motos contested in the MXD division to take the round win and close to within 13 points of the championship lead. It was the first time Evans had finished with 1-1 results in a round and he was also the fastest qualifier in his division in what was a break through weekend for the North Queenslander.

And just as the dust, and a lot of mud, was setting, Victorian Y-Aim agent, Cameron Taylor took a 1-1 result in the Over 40‰Ûªs Vets class.