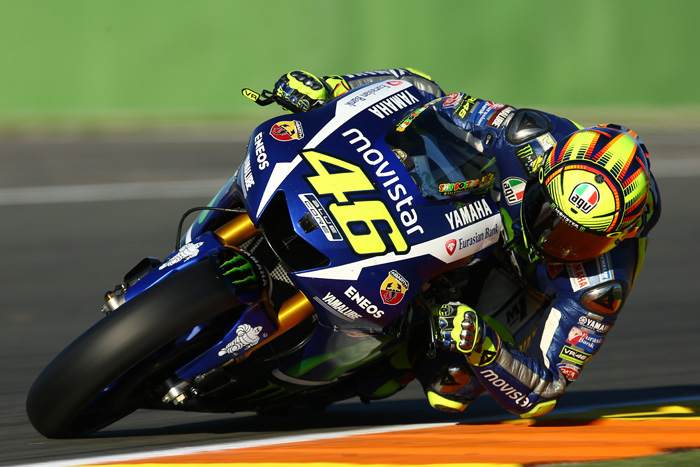 Movistar Yamaha MotoGP's Jorge Lorenzo and Valentino Rossi headed out on Circuit de la Comunitat Valenciana - Ricardo Tormo this morning and were able to make a big step in the afternoon as they tested the 2016 YZR-M1 machines, with the fuel tank on the back of the bike, new front forks and the mandatory electronic software for next year's season.

Following the same procedures as yesterday, Lorenzo was the first of the Movistar Yamaha MotoGP team-mates to make his way out on track. It didn't take him long before he confirmed his key protagonist status as he briefly took over the top spot.

He spent the majority of the day on his 2016 bike and completed a total of 48 laps. Throughout the day the Spaniard bettered his time to a 1'31.282s on his penultimate lap to complete the day in fifth place, 0.222s off the front.

Team-mate Rossi also had a productive second day of testing. He energetically tackled every item on today's schedule and completed more than two full race distances.

As the day progressed he adjusted the settings of his bikes to match the Michelin tyres and clocked a personal best lap of 1'31.498 on lap 57, moving him up to sixth place, 0.438s from first.

Rather than focusing on bettering his time, the Doctor ended the day collecting valuable data with a steady final run on the 2016 machine and was pushed back to seventh place by a late flurry of activity.

"It has been a good second day of testing." Massimo Meregalli - Movistar Yamaha MotoGP Team Director said. "The riders focused on coming to terms with the new electronics and setting up their bikes for the new Michelin tyres.

"We saw them make big improvements compared to yesterday and the team was able to provide both Jorge and Vale with a setting that gave them a better feeling. Yamaha's Japanese engineers will gather all the data we have accumulated here over the last two days and work towards making another step in the next test.

"Our work is not finished yet, most likely we are going to have another test before the end of this month. After that we will have a well-deserved holiday to recharge our batteries for the next year."