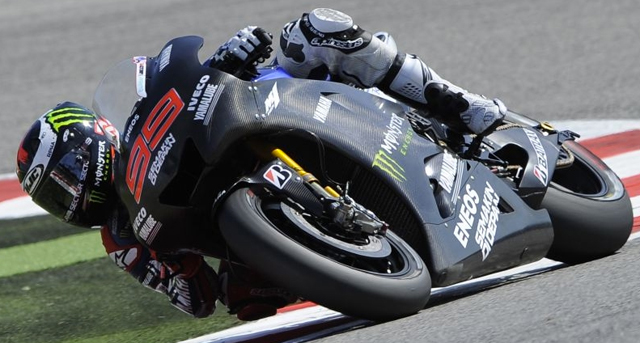 Following straight on from yesterday‰Ûªs stunning victory by Jorge Lorenzo in the Grand Prix of San Marino, the Yamaha Factory Racing Team were straight back to work this morning.

Riders Jorge Lorenzo and teammate Valentino Rossi spent the day evaluating an engine spec for the 2014 YZR-M1 along with a number of setting options on the current 2013 machine ahead of next week‰Ûªs Aragon Grand Prix race.

The test proved to be a positive one, the riders completing an exhausting 142 laps between them. At the end of the session Lorenzo sat in second on the timesheets with a 1‰Ûª33.502.

‰ÛÏHappily we got a great sunny session." Lorenzo enthused. "The weather was perfect to test and we were able to make many laps to check our latest issues on the bike. We were pretty focused on the settings thinking about the next race at Motorland in a couple of weeks and we found some good feelings.

"We also tested a new spec engine for 2014 that worked really well and we are quite happy with the result. Furthermore there were some new pieces for 2013 but small details to improve our performance.

"Nevertheless the most important issue was to work on the next GP in Aragon, another good challenge for us, especially because in the last years we've struggled a bit," he added.

Valentino Rossi and Rossi was not far behind in third with a 1‰Ûª33.660 after completing 75 laps

‰ÛÏFortunately it was a good day, the weather was good. It was important to make a day of testing at Misano like this, because we had much we needed to try." Rossi stated.

"I used the race bike and a bike where there was also something new for next year. At the end it has been a good test. It was important because we found some improvements in some points of view, small details but a good way to continue.

"We made a lot of comparisons between the two but at the end more or less the performance is very similar. Now a few days of rest and then we will be ready for Aragon!‰Û