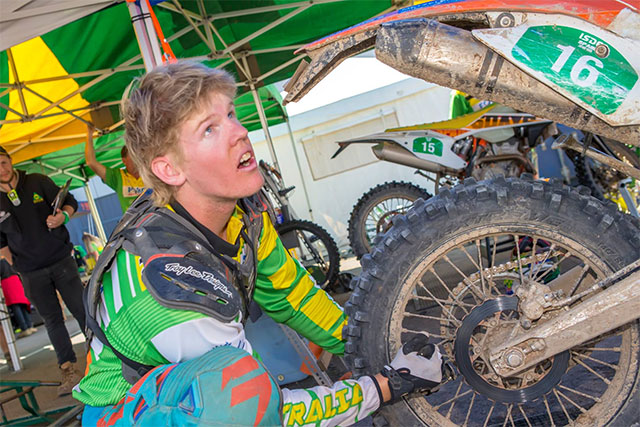 In ideal riding conditions for the penultimate day of the International Six Days Enduro in Navarra, Spain Australia‰Ûªs competing riders were able to clinch down on the competition and once again show their talents.

After losing valuable seconds on first place on day four, day five Daniel Sanders was able to redeem 13 seconds and is now only 12 seconds off the pace. Still sitting first in the outright Championship World E3 class by over 40 seconds, Sanders is in good form heading in to the final day of competition to take an individual title.

Coming leaps and bounds since the start of the competition Husqvarna mounted Lachlan Stanford finished multiple tests in top 20 positions making his best finish just outside top ten, in 11th position. After an impressive performance on the bike Stanford now sits just outside the top ten in his Championship World E1 class in 11th also.

Stanford shared that today was much better, especially finishing the day with a final placing just outside the top ten.

‰ÛÏI had a good day today the tracks dried up from yesterday - it was a really wet day, and my test times were terrible. This morning I woke up and the tracks were dry so I was pretty happy,‰Û