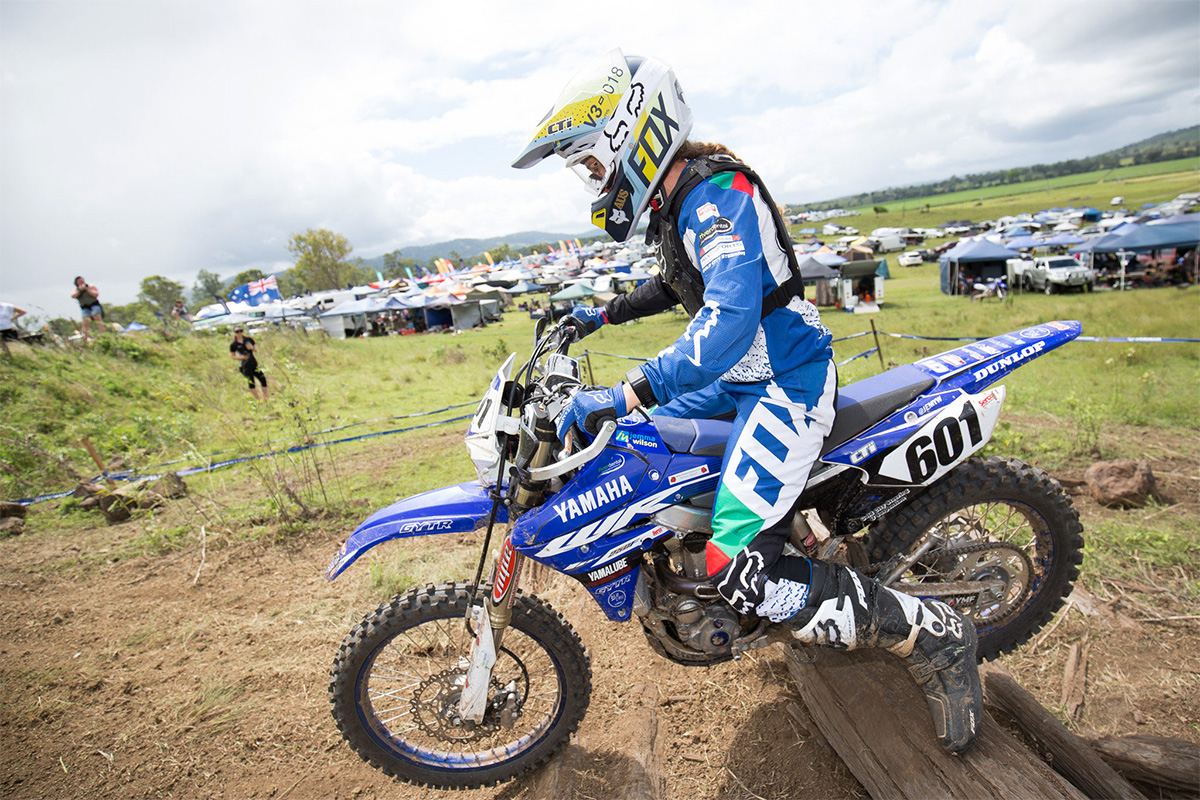 Jemma Wilson has sent a strong message to her competition in the Women‰Ûªs class, after taking out Sunday‰Ûªs sprint to back up Saturdays win Photo: John Pearson Media
Round two of the Yamaha Australian Off-Road Championship (AORC) has been run and won at Gympie in Queensland with many of the support class riders backing up their round one results with a win.

Jemma Wilson has sent a strong message to her competition in the Women‰Ûªs class, after taking out Sunday‰Ûªs sprint to back up Saturdays win.

Ben Grabham also completed the double to get off to the perfect start in the Veterans class, whilst Geoff Ballard took out the Masters class at Round 2 of the Yamaha Australian Off-Road Championship (AORC).

It was a weekend of back to back wins for the Juniors on Sundaywith Korey McMahon dominating the J4 class in style, Will Riordan taking J3 and his brother Angus, J2 . It‰Ûªs quite clear that the future of the AORC is in great hands with many Juniors putting on brilliant displays. The Juniors once again competed from the bLU cRU test gate.

Womens
In a quest for three titles in a row, Wilson couldn‰Ûªt have gotten off to a better start in the pursuit finishing Sunday with a time of 1:07:27.921. Wilson had stiff competition today from Emelie Karlsson who finished in second, 24 seconds behind Wilson with her 1:07:51.129. Jessica Gardiner of the Yamaha MX Store Ballard‰Ûªs Off-Road Team enjoyed a solid weekend‰Ûªs riding in her return to the Australian scene, finishing in third position 1:08:12.758, after a second place in Round 1. 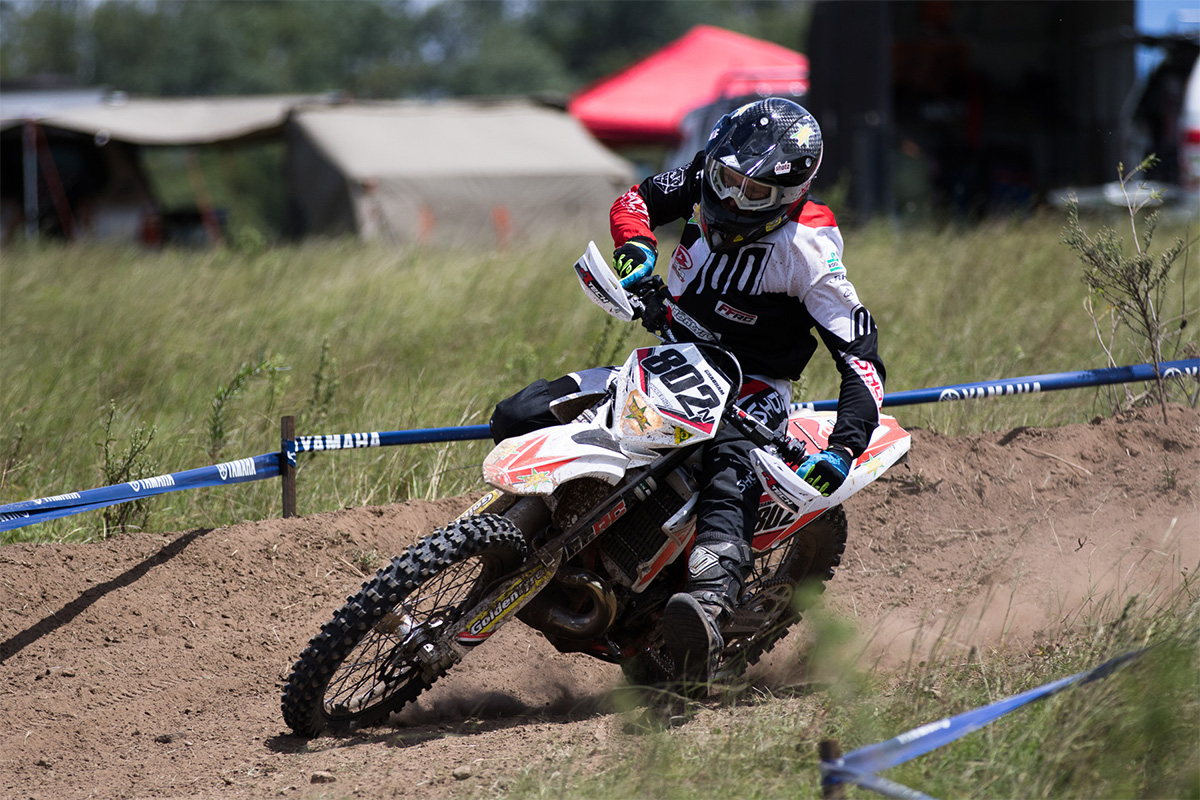 Ben Grabham also completed the double to get off to the perfect start in the Veterans class, Photo: John Pearson Media
Vets
Ben Grabham has asserted himself as the man to beat in the over 35s veterans class, as he backed up his Saturday win with a Sunday victory on his Beta machine. Grabham was a step ahead of the field finishing with a time of 1:03:04.481. Richard Chibnall and Jade Gartlan went back and forth on the time sheet throughout Round 2, with Chibnall sneaking ahead on his KTM 1:06:08.459, as Gartlan rounded out the podium on his Gas Gas with a 1:06:11.641.

Masters
Geoff Ballard came out on top of Round 2 in the Masters class, to go along with his second place in round one. Ballard went toe to toe with Round 1 winner John Baker, and got the better of him to stop the clock at 1:08:00.418. Baker had to settle for second place in the end. with a time of 1:08:07.887, just over seven seconds adrift. Ian Jenner was consistent throughout Sundays racing and rounded out the podium with his 1:09:16.084, grabbing two third place finishes over the weekend. 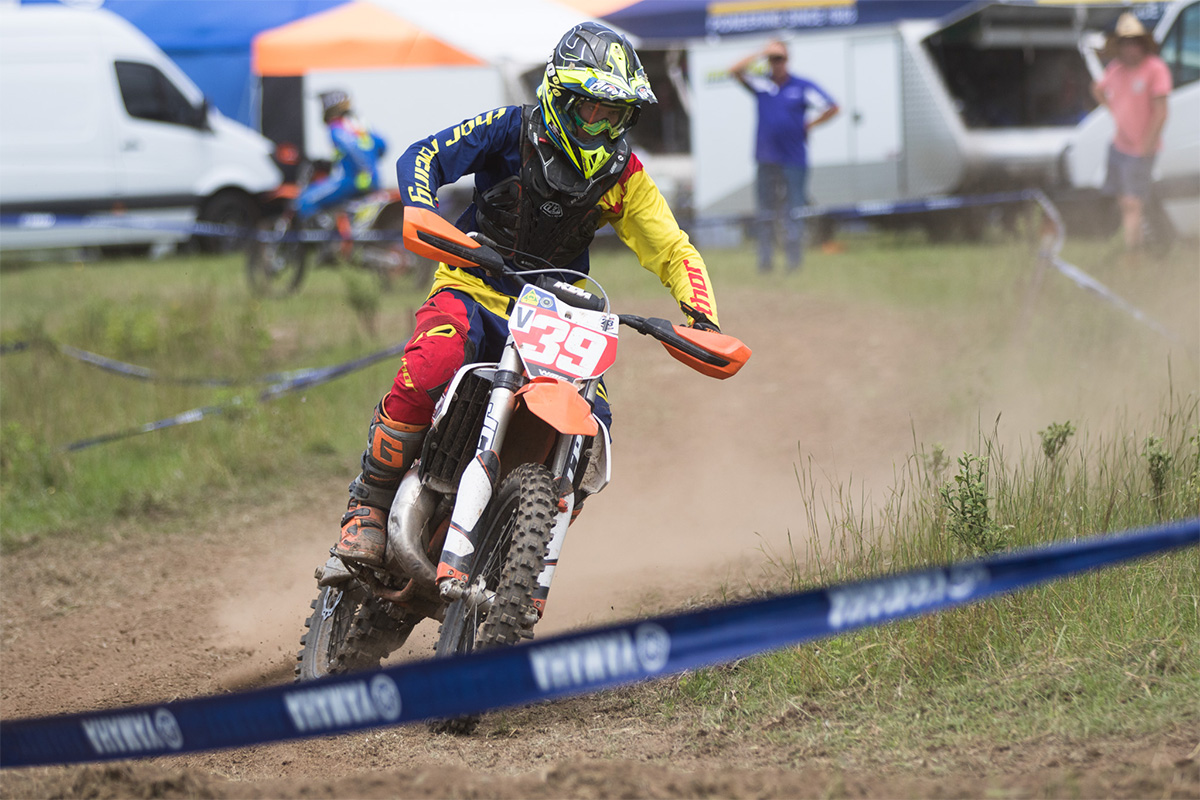 Last year‰Ûªs J2 Champion, Will Riordan (KTM) continues to impress everyone with another victory in his debut for the J3 class. Photo: John Pearson Media
J4
Korey McMahon was simply outstanding on his KTM machine, riding to an astonishing 124 second advantage, over his rival Kyron Bacon (Honda). These two enjoyed a very exciting battle yesterday with McMahon coming from behind to take the victory. It was a much more relaxed victory for McMahon this time however, with him registering a time of 1:07:58.653 and Bacon a 1:10:03.156. The final podium placing went to last year‰Ûªs J3 Champion Jayden Rudd (KTM), who will be looking to take the fight to the top two in the next rounds.

J3
Last year‰Ûªs J2 Champion, Will Riordan (KTM) continues to impress everyone with another victory in his debut for the J3 class. Riordan managing a total time of 1:10:41.727. The nearest challenger to Riordan was Blake Hollis, lodging a 1:11:31.576 to bridge the gap to 48 seconds. Ned Chapman on his Yamaha machine was the final podium placer.

J2
In another case of Riordan domination, as the J4 win went to his brother Angus (KTM) who ascended to a victory of over three minutes to Billy Hargy (Husqvarna). Riordan managing a 1:13:29.232 and Hargy a 1:16:46.742. Taking the final step on the podium was Mackenzie Johnson on a Yamaha bike.