Yamaha AORC EJ Class flourishing with Transmoto as partner in 2017 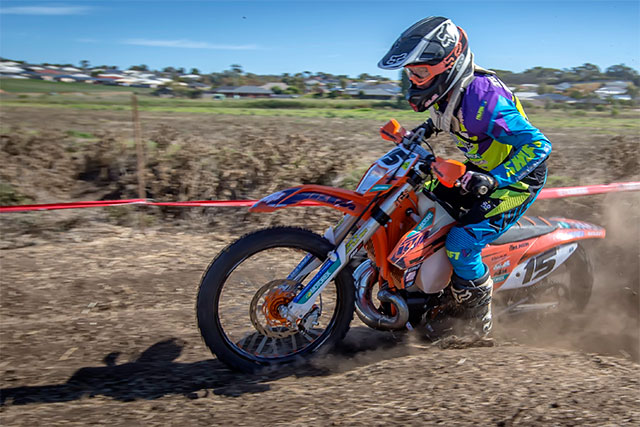 Transmoto will continue to partner the Yamaha Australian Off-Road Championship (AORC) as presenting sponsor of the Enudro Junior (EJ) class in 2017.

"Transmoto is a dynamic media company that focuses on bringing all manner of dirt-related events, community and creative content to their audience, and a name that‰Ûªs ubiquitous with the Australian Off-Road landscape for many years. As one of the largest supporters of the dirt bike scene in Australia, the Yamaha AORC is excited to once again have Transmoto on-board," Motorcycling Australia (MA) stated in a press release.

A number of contenders will battle for the EJ class Championship in 2017. New DSR Motul Pirelli Sherco rider Nic Tomlinson and Husky-mounted Fraser Higlett will look to challenge after being runners-up in the class last year. Plus, there are a number of former J4-class riders (125cc to 200cc 2-stroke & 200cc to 250cc 4-stroke ‰ÛÒ up to 15 years) ‰ÛÒ including Mitten brothers, Zac and Tom, who will have their first taste of Senior action in EJ this season. Michael Driscoll is another competitor straight out of Juniors. He has a real talent for off-road racing and will look to show the Seniors what he is made of, after a strong showing at the NSW State Championships. It‰Ûªs all to play for in 2017.

The Transmoto Enduro Junior (EJ) class was introduced back in 2014 to assist young riders make the often-difficult transition from Junior to Senior classes as they progress in both age and skill. The class (formerly known as 19 & Under) has been extremely successful in helping Australia‰Ûªs young enduro riders make an impact in the Yamaha AORC, and hone their talents for the world stage. Previous EJ riders, such as Daniel ‰Û÷Chucky‰Ûª Sanders and Jack Simpson, have since gone on to enjoy phenomenal success in Yamaha AORC and the International Six-Days Enduro after competing in the EJ class. With Transmoto getting behind the stars of tomorrow in the EJ class again, there will be many more success stories to come.