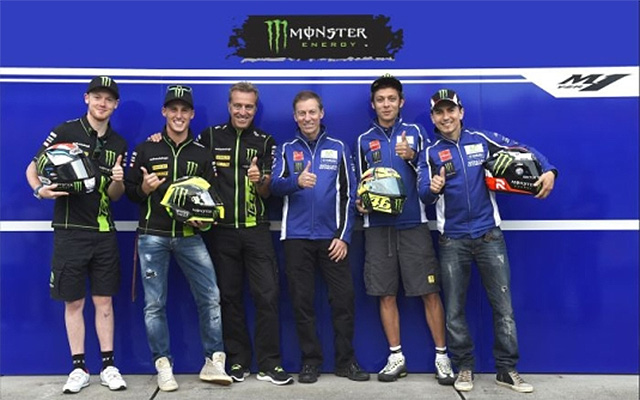 Yamaha Motor Co., Ltd has confirmed an agreement to continue in MotoGP with The Monster Energy Company as an Official Sponsor for a further two years.

The agreement covers Monster Energy‰Ûªs role as an Official Sponsor of the Movistar Yamaha MotoGP team and that of Title Sponsor for the Monster Energy Yamaha Tech3 Team.

With four ‰Û÷Monster Energy riders‰Ûª within the two teams, this MotoGP partnership at the pinnacle of motorcycle racing spearheads a globalMonster Energy-Yamaha alliance that stretches across multiple race disciplines and classes.

Lin Jarvis - Managing Director, Yamaha Motor Racing, said, "I‰Ûªm very happy to be able to confirm this agreement with Monster Energy for our MotoGP program. As two of the most recognisable brands in the premier class of motorcycle racing we have enjoyed a highly successful partnership together in recent years.

"Monster Energy‰Ûªs sponsorship of both Movistar Yamaha MotoGP and also of Monster Energy Yamaha Tech3 holds special significance with the unique synergy between the two racing teams in the MotoGP class. Tech3 continues to provide a key role not just as credible protagonist in the fight for MotoGP honours but also as a nurturing channel for young talent for the Factory team. We look forward to developing and strengthening this three-party relationship even further into the future.‰Û