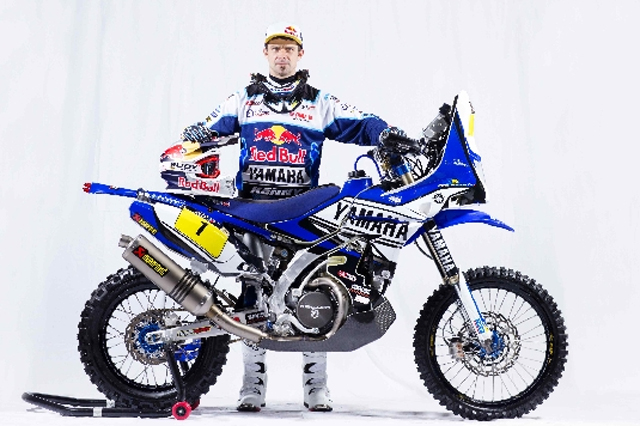 Yamaha today revealed its official racing livery for the 2014 Dakar Rally as the clock ticks down to the final stages of preparation head of the 5th of January start.

Expectations are high as Yamaha Factory Racing‰Ûªs latest evolution of the YZ450F Rally will be in the hands of Dakar legend Cyril Despres on the start line in Rosario, Argentina. Despres leads the manufacturer‰Ûªs efforts for Dakar glory supported by fellow Frenchmen Michael Metge and Olivier Pain and Dutchman Frans Verhoeven.

The Yamaha riders stole the opening show in the 2013 Dakar Rally with their 450F machines, Pain leading overall from the fourth to the end of the seventh stage before handing over control to fellow Yamaha rider David Casteu going into the rest day. Casteu claimed a stage win on the fifth stage and Dutchman Verhoeven took the 12th stage.

Despres is the most successful Dakar rider of the last decade, winning in 2005, 2007, 2010, 2012 and 2013. His record in the world‰Ûªs toughest endurance race is only beaten by fellow Frenchman StÌ©phane Peterhansel‰Ûªs impressive six victories, all taken with Yamaha. Since his signing earlier this year, Despres has been a key factor in the development and preparation of the 2014 Yamaha YZ450F rally machine, combining his years of Dakar experience with Yamaha‰Ûªs technical expertise.

‰ÛÏRight now we are in the final phase of preparations before leaving for South America and its pretty busy around here," Despres explained. "I have an intensive training routine that I have established with my coach and it takes up a large chunk of the day.

"Then there‰Ûªs interviews to do, last minute details to sort out with the team, a million little details to attend to, not least of which is analyzing the 2014 route. Obviously we only get the road book the day before we race a stage so the info we have is limited.

"It is clear is that the 2014 edition is going to be a particularly tough one. Marathon stages means no outside mechanical assistance at the bivouac and so on those days you try and protect the bike as much as possible. Bike only routes means that the organisers can take you places where the cars can‰Ûªt go, so you know the riding will be more technical and usually more physically demanding.

"The extra 1000km speak for themselves! And of course this year the bikes will go into Bolivia for the first time. On some of the other stages we have a pretty good idea of what to expect but for Bolivian stages we have absolutely no idea and even if we wanted to go and have a look we couldn‰Ûªt because all reconnaissance is banned. What we do know is that they will be very demanding.

"For a start some of it‰Ûªll be raced at 4000m and at those altitudes the air‰Ûªs pretty thin. Then Bolivia is both ‰Û÷marathon‰Ûª and ‰Û÷bike only‰Ûª, so doubly complicated. But demanding is fine by me.

"What attracted me to rally-raid in the first place is the challenge and the harder it is the happier I am.‰Û