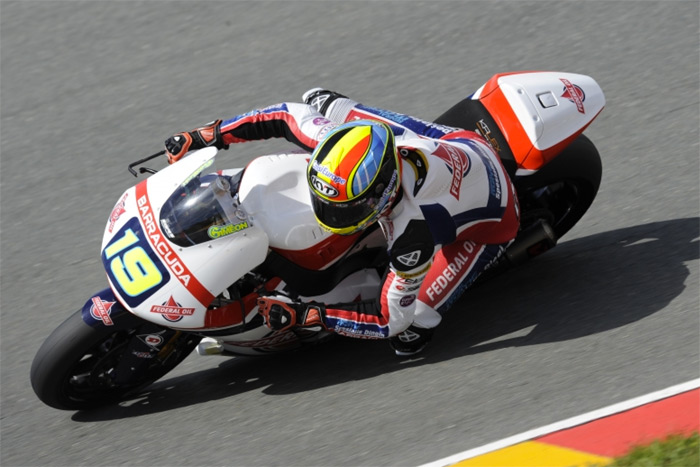 Xavier Simeon (Federal Oil Gresini Moto2 Kalex) finally made good on several years of promise with a superb first Grand Prix win in the Moto2 class at the Sachsenring in Germany overnight.

Simeon‰Ûªs victory was the first by a Belgian rider since Didier de Radigues won the 1983 Belgian 250cc GP at Spa-Francorchamps aboard a Chevalier.

As Simeon and Zarco crossed the finish line Morbidelli lost the front entering the final corner, trying to protect his first podium. Unfortunately Rabat could not avoid the falling machine and was scooped up, tumbling into the gravel trap, just eight days after he had a collarbone plated following a training accident. The plate wasn‰Ûªt damaged but two loosened screws will need replacing via further surgery.

That double exit promoted Rins to third place, with Simone Corsi (Forward Racing Kalex) slipping back to a lonely fourth-place finish. First non-Kalex rider was Argentine GP winner Sam Lowes (Speed Up Racing Speed Up) who fought hard to come through the pack to fifth, passing French GP winner Thomas Luthi (Derendinger Racing Interwetten Kalex) and others in the process.

‰ÛÏI‰Ûªm so happy! We did a good time in qualifying and I knew I was consistently fast, but we had to think very hard about tyre choice because the two different tyres we could use were very similar." Simeon said. "We changed at the last minute on the grid and that was the key ‰ÛÒ at the end of the race I could push just as hard as at the beginning.

"In the early laps there were some big battles, so I took it a bit easy, then when I saw Johann going away I passed Morbidelli and pushed so hard to make sure Johann couldn‰Ûªt get way. Then I knew I could win, if I rode at 200 percent and made no mistakes.‰Û