WSBK Season restarts for Lowes and Guintoli in Germany 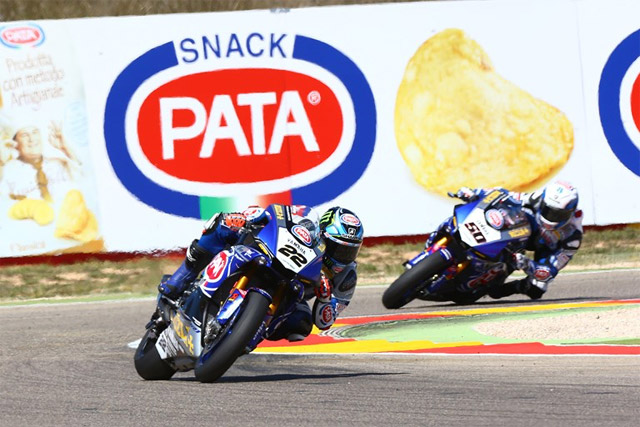 Pata Yamaha Official WorldSBK Team will be back to full strength and its original line-up as the 2016 MOTUL FIM Superbike World Championship restarts at the EuroSpeedway Lausitz in Germany later this week.

Sylvain Guintoli returns to action alongside Alex Lowes at the 4,265m circuit, after the championship took a two-month-long break from racing over the summer.

While WorldSBK has not witnessed wheels turned in anger since Laguna Seca, Lowes has been far from resting. Competing, and winning the Suzuka 8Hours with the Yamaha Factory Racing Team in late-July, he then went on to re-join his victorious endurance teammate Pol Espargaro in the Monster Energy Tech3 Team, substituting for injured countryman Bradley Smith in two consecutive MotoGP races at Silverstone and Misano.

Lausitzring will herald his third race in as many weeks but the British rider, who turns 26 on Wednesday, remains as determined as ever to get back to the day job, utilising the experience and skills honed aboard the multiple machines to deliver on the WorldSBK-spec YZF-R1.

"Lausitz is a new track for me and most people in WorldSBK but I'm looking forward to this weekend and getting back on the YZF-R1." Lowes said. "I think it's going to be a difficult race for everyone, as it's a technical track with some tricky sections but we had a good test there last month.

"My goal for the final four rounds is to up our game a bit and finish the season well so I'm looking forward to getting started."

Germany will provide Guintoli with his first race weekend since the qualifying accident at Imola forced him out of competition. Having spent the past four months concentrating on his rehabilitation and fitness, the Frenchman has been back on track aboard his road and race YZF-R1's as he prepares for his return.

His most recent outings have seen the 34-year-old reacquaint himself with the Pata Yamaha team at two private tests, allowing the opportunity to both learn the Lausitz layout and test his fitness against his familiar Magny-Cours circuit. Guintoli is confident that he can return to the sharp end for the final four events in the 2016 calendar, starting with the Brandenburg track this weekend.

"Obviously I have been out of competition for a few months now so I'm really looking forward to getting back into the mix and getting stuck in." Guintoli stated. "You can't replace racing - there is nothing that gets anywhere near the feeling it gives you to compete and to race so I am very much looking forward to this weekend.

"Hopefully I can rebuild my speed quickly, find the feeling with the YZF-R1 and enjoy the end of the season. I think everyone agrees that Lausitz is not the most exciting track and is very bumpy but we have to do the best we can there to get a strong result."

The Lausitzring EuroSpeedway is located in eastern Germany, close to the Czech and Polish borders, lying approximately 65kms north of Dresden and 135kms south of Berlin. The anticlockwise layout houses 13 corners, 7 left and 6 right-handers and while the overall landscape is flat, the twisty circuit provides a unique experience for the riders. WorldSBK last visited the circuit in 2007, with Noriyuka Haga taking a race win, a further podium and setting the lap record of 1'38.622 on his Yamaha YZF-R1.