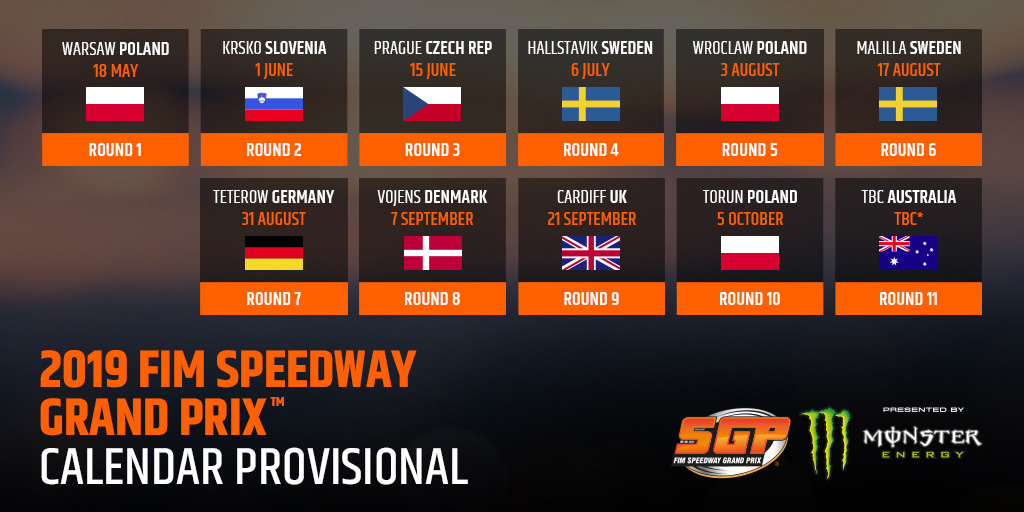 The provisional calendar for the 2019 FIM Speedway Grand Prix series has been revealed as World Championship racing returns to legendary venues Wroclaw and Vojens.

Wroclaw‰Ûªs Olympic Stadium in Poland hosted the first-ever SGP event in 1995, while Danish track Vojens hosted the last-ever World Final in 1994 before the SGP series was introduced.

Vojens last welcomed an SGP round in 2014 and it has been 11 years since the last European SGP staged in Wroclaw. But both venues are back for 2019 as eight different countries host 11 rounds of World Championship action.

The series opens with the PZM Warsaw SGP of Poland in front of what‰Ûªs set to be a packed PGE Narodowy on May 18.

The action moves to Krsko on June 1 for the Slovenian SGP, before Prague‰Ûªs Marketa Stadium ‰ÛÒ the series‰Ûª longest-serving venue ‰ÛÒ hosts its 23rd Czech Republic SGP on June 15.

Hallstavik, which staged its first ever SGP event this summer, is once again the venue for the Swedish SGP on July 6.

After a one-month break for the series, Wroclaw‰Ûªs Olympic Stadium makes its much-anticipated return to the FIM Speedway Grand Prix calendar with the Wroclaw SGP of Poland on August 3.

The action moves to the forests of Malilla, Sweden for the Scandinavian SGP on August 17.

Teterow‰Ûªs Bergring Arena plays host to the German SGP on August 31, before the Danish SGP comes to Vojens a week later on September 7.

The jewel in the SGP crown, the Adrian Flux British SGP, returns to Cardiff on September 21 ‰ÛÒ the latest point in the season the event has been staged as the world‰Ûªs top riders race for high stakes under the Principality Stadium roof.

The final European round takes place in Torun on October 5, before the series heads back Down Under after a one-year break for the Australian SGP, with the date and venue to be confirmed.

‰ÛÏIt‰Ûªs great to welcome so many long-serving venues back for another year and it‰Ûªs a real pleasure to have Wroclaw and Vojens back on the calendar ‰ÛÒ they are two great tracks with a rich history in the sport," Olsen said.

‰ÛÏWith the SGP 2019 line-up revealed and the calendar announced, the countdown to next season is already well underway and we‰Ûªre very excited to see what the series has in store.

‰ÛÏAfter winning an historic third world title, Great Britain‰Ûªs Tai Woffinden will be determined to try and win back-to-back championships for the first time. But this will be no easy task against such an impressive field.‰Û