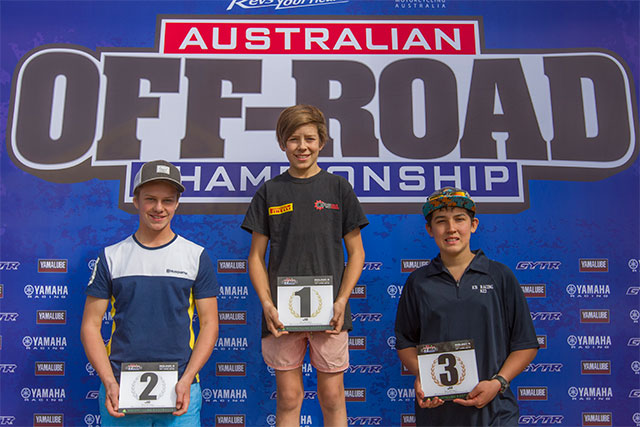 Round 3 on Saturday saw the junior classes today hit the 5.5km sprint track in the hope to lay the fastest times in the tests, claiming the outright position in their classes at the 2016 Yamaha Australian Off-Road Championship held at the remote Portland, NSW, location amongst the hills.

Sunday's 4th round saw a reverse sprint track saw youngsters in the J2, J3 and J4 classes, once again put their bikes through the paces at round 4 of the 2016 Yamaha Australian Off-Road Championship, where the battles were even bigger, better, and faster today.

Round 3 (Sat)
The Mitten brothers, Tom and Zak dominated the J4 class for round 3 at the Portland venue coming within seconds of each other, and both almost two minutes ahead or the remaining field. However it was Tom Mitten who managed to snatch the top time finishing with a 52:48.396, while Zak Mitten slotted in second with a time of 52:53.850. Zane Temperley just off the pace finishing the round with a time of 54:03.899.

Round 4 (Sun)
The Mitten brothers once again battled it out on their Yamaha machines, proving they had the pace on the reverse sprint track. However, it was Zak Mitten today who managed to pip his brothers time, finishing with a 44:03.124, while Tom Mitten finished just seconds off the pace with a 44:56.456. Will Price put up a fight for time today, but just couldn‰Ûªt quite match the times of the Mitten brothers - Price taking third place with a 45:16.131 time, at the conclusion on today‰Ûªs sixth test.

‰ÛÏIt feels pretty good to beat my brother today, it was dusty and rough and the track was pretty tight but it was good to ride,‰Û 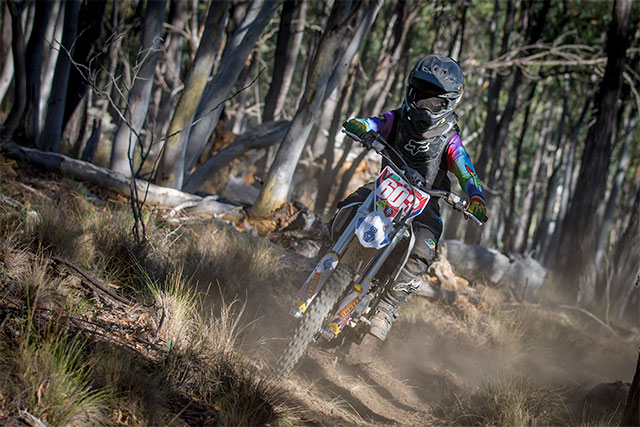 Ashden Gramlick. Credit: John Hamilton/Mad Dog Images
Round 3 (Sat)
Jye Bennett managed to maintain consistency across his six tests, returning to the finish line with a combined time of 52:17.101. It wasn‰Ûªt without pressure from young Mitchell Brierley however who narrowly missed out on the first place with a 52:24.974. Third placed was claimed by Corey Hammond who managed to pull his machine around with a concluding time of 53:15.618.

Round 4 (Sun)
Jye Bennett was on fire again at round 4 today, the talented young rider claiming yet another round victory in the J3 class. Bennett also snatched up the junior outright win today, with an outstanding total time of 43:20.376. Mitchell Brierley collected second position (44:39.620) and was close behind Bennett, however wasn‰Ûªt able to catch the lightening fast junior. Third position today in the J3 class was scored by Corey Hammond, who showed his speed throughout the six tests, walking away with a smile and a total time of 45:04.239.

‰ÛÏI am feeling pretty good after my results this weekend,‰Û