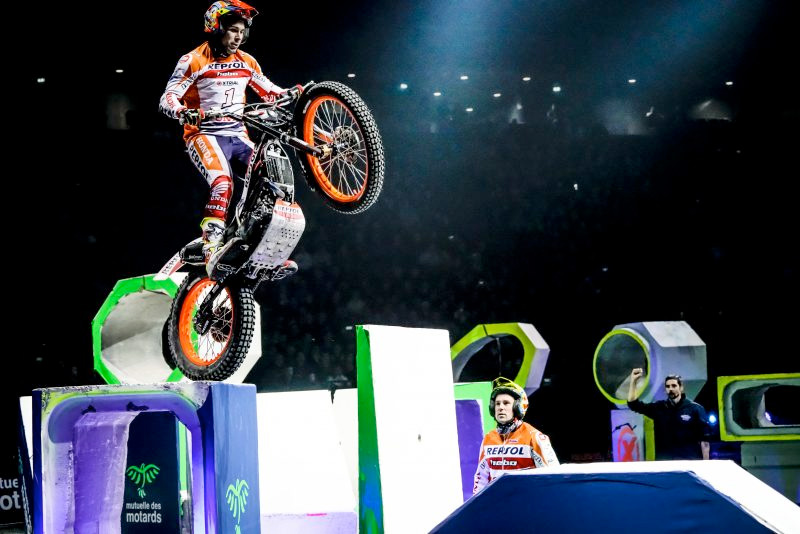 Whilst achieving the aim of another World Title, the Repsol Honda Team rider suffered severe lower back pain, a clear symptom that he was not yet fully recovered.
Spanish Repsol Honda Team rider Toni Bou, recently crowned FIM X-Trial World Champion in Paris for the twelfth time, will not take part in this season‰Ûªs final event.

Bou had reappeared in the competition only twenty-seven days after breaking three vertebrae in an X-Trial event in Le Mans. In Paris, Bou returned with a firm determination to mathematically seal the world champion title aboard the bike.

Whilst achieving the aim, the Repsol Honda Team rider suffered severe lower back pain, a clear symptom that he was not yet fully recovered. After a recent medical, the rider has taken the decision to sit out the seventh and final event of the FIM X-Trial World Championship to be held this Thursday in Budapest. Bou will continue with the recuperation process of the injury.

"It's a shame I can‰Ûªt compete in Budapest, but doctors have told me it's better not to take more risks," Bou said. "It is the most sensible and logical option that I have, since I overdid things by participating in Paris. I have all the parts of the spinal column very loaded up and it is a very sensitive area where many nerves pass through. The hours after the X-Trial in Paris were pretty bad really, and I think it is best not to take part in this and concentrate on recovery. With the title in the bag, I can now think in a more coherent way and the decision we‰Ûªve made is the smartest one, if I want to come back stronger in the next event."

Bou's team-mate Takahisa Fujinami will, however, participate once more in Budapest. After finishing on the podium in Paris, the Japanese Repsol Honda Team rider will take part in his fifth world championship trial this season. Fujigas‰Ûª mission is to make the cut for the second phase, with a high-level ride, as he goes in search of a higher position in the championship rankings. Fujinami is currently eighth in the overall X-Trial World Championship standings.

"For me it was extraordinary to be able to get on the podium in the last trial in Paris because, just like over the last 12 years, Toni was usually there... but for once in this event, he wasn‰Ûªt," Fujinami said. "However Toni ended up winning the title anyway. I think I rode a good trial and I hope to qualify well in Budapest improve on my overall position in the general standings."