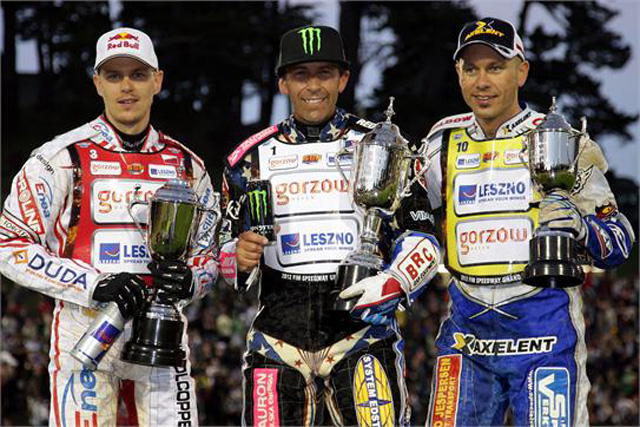 Hancock won the final World Championship round of 2011 in Gorzow last October and picked up right where he left off by beating world No.3 Jaroslaw Hampel, Danish star Nicki Pedersen and Aussie favourite Jason Crump in the final, leaving him four points clear in the championship race taking a total of 22 points out of a possible 24 at the Western Springs track.

This result was the perfect reward for the 41-year-old, who has practiced tirelessly in his native California over the winter doing the bulk of his practicing with his former Team Exide partner, 1996 world champion Hamill, before making a flying visit to Britain in mid-March to ensure he was race-sharp.

Hancock won his first world title in 1997, but endured a disastrous first Grand Prix in 1998 ‰ÛÒ scoring just six points at the Czech SGP in Prague. He had no intention of repeating that faltering start and has been chomping at the bit to launch his defence.

"It has all been about the anticipation for this particular day. In the last three weeks, I've just wanted it to come." said Hancock "I was tired of all the talking about it and waiting to get here."

I've travelled a long way. I've been to Europe and back and I've done a lot of travelling. But I've enjoyed my time here and it's so satisfying to come away with a win from the first one. It has started out tremendously." he continued.

Hancock is the undisputed master of the Southern Hemisphere, having won the 2002 FIM Australian Grand Prix in Sydney - the only other SGP event staged outside of Europe in the competition's history.

Hampel completed an impressive turnaround to bag the second place after starting his night with two third places, saying "This is a really hard job when you start and something is wrong because then you have to think a lot in the pits about what's going on."

"I had a bit of trouble with my bike and I couldn't find good speed. It's strange because we had two day's practice, but sometimes speedway is strange. I worked really hard with my team in the pits and we found a good setup on the bike. I found a good line on the track and everything was much better in the middle and end of the meeting." he added

"In the final, Greg was fantastic. He was incredibly fast, but second place is good for me." Concluded Hampel

The final place on the pedistal went to Pedersen who worked wonders to reach the rostrum after crashing hard in heat 16, when Russian racer Emil Sayfutdinov lost control and inadvertently crashed into him on turn four.

Pedersen ended his heats with nine points, before going on to fend off Tomasz Gollob in semi-final one then he was able to bag a third in the final race. Having taken a heavy blow to the head and twisted his ankle, Pedersen was delighted to leave Auckland with 13 points.

"I wanted to have a good start and I got on to the rostrum." explained Pedersen. That was a good result and I just want to be consistent this year." he continued.

"There's a month now until the next Grand Prix, so I have time to get better again after my crash." he concluded.

Round two of the World Speedway Grand Prix returns to on April 28th at the FIM European SGP at Leszno.


Main Photo: Greg Hancock stands a top of the podium at round one in New Zealand.
Photo Credit: Supplied