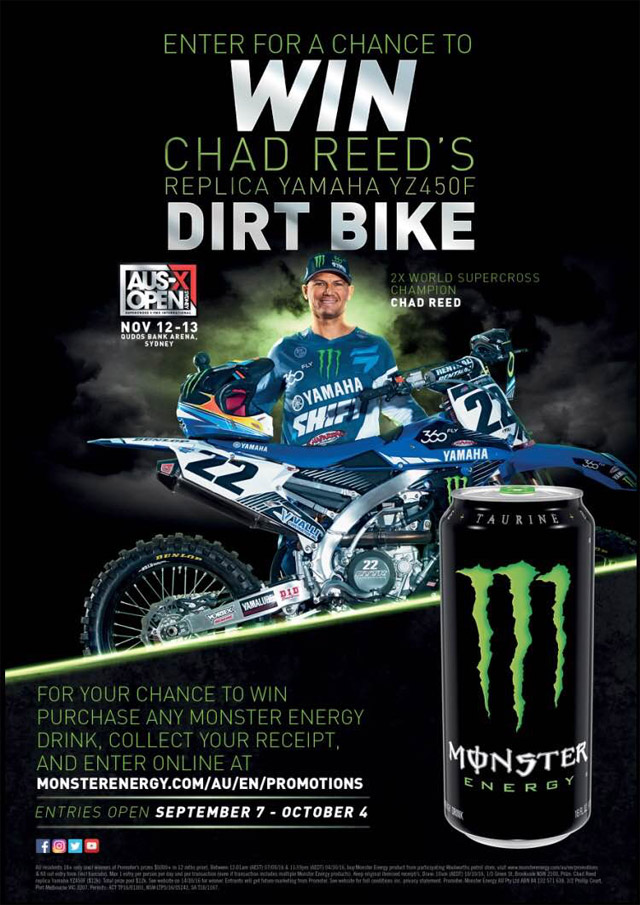 Following the announcement that global energy drink giant ‰ÛÒ Monster Energy, will partner with the AUS-X Open for 2016, the two have also converged with event partner Yamaha Motor Australia in a nationwide sales promotion, being featured in over 900 Woolworths Supermarkets and 500 Woolworths Petrol Stations.

Consumers simply purchase a Monster Energy product from any participating store and complete their entry online (www.monsterenergy.com) for their chance to win a replica Chad Reed Yamaha YZ450F. Monster Energy are also giving away a VIP experience at the 2016 AUS-X Open.

Generating mainstream awareness and consequently new fans of supercross in Australia is a key priority for the AUS-X Open promoters and Monster Energy, who have been a strong supporter of the event since it‰Ûªs inception last year.

‰ÛÏThis promotion with Monster Energy inside selected Woolworths outlets is absolutely huge. Having a globally recognised brand such as Monster Energy firstly come on board with the AUS-X Open, and then run a nationwide promotion like this to such a mainstream audience is incredible and vital for the sports expansion within Australia,‰Û