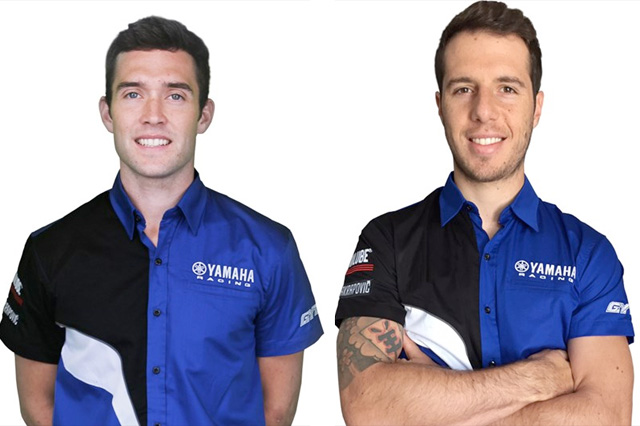 Yamaha Motor Europe have confirmed an extension to the official line-up in the premier division of the FIM Motocross World Championship MXGP with the Wilvo Yamaha Official MXGP team stepping into the fray with YZ450Fs and riders Shaun Simpson and Arnaud Tonus slated for the next two years.

The Dutch set-up transfers out of the MX2 class after two successful seasons in which they toasted Grand Prix victory with Valentin Guillod, enjoyed podium prominence thanks to the efforts of Julien Lieber and Aleksandr Tonkov (the Russian with two trophies in 2016) and nurture the career path of Sweden?s Alvin ÌÐstlund.

After a management reshuffle and under the keen eye and willingness of Louis Vosters, the team will start development on their YZ450F racebikes and with the expertise of 28 year old Simpson (three times British Champion, the top rider from the UK in MXGP in the last five years and three times MXGP winner) and 25 year old Tonus (former MX2 GP victor and back from two years competing in AMA SX & MX250) central to their renewed challenge at the peak of motocross racing.

"I'm really looking forward to us moving up to the MXGP class and I'm very happy with our line-up with Shaun and Arnaud," said Vosters. "They both have great potential and I hope they will surprise us next year. Regarding Yamaha their strategy and way to work is very professional and positive so it's nice to be part of the family. Arnaud should be on the bike for the first time at the end of next week and we're already looking ahead to the Geneva SX and then the opening pre-season races."

Simpson?s first Grand Prix triumph came with a tuned production YZ450F at Lierop for the final round of the 2013 FIM World Championship for what is still regarded as one of the unlikeliest wins in recent memory and the last time a ?privateer? stood atop an MXGP podium.

"The last time I rode a Yamaha was pretty memorable for me and I still think it was one of the best bikes I?ve ridden in terms of feeling and comfort," says Simpson, claimer of two MXGPs in the past two seasons and who finished fourth in the world in 2015.

"I can only look at the next two years with optimism: I'm happy. Louis has built a good team and support structure and knows the importance of the rider in the whole set-up. Arnaud is a great guy and we?ve worked together before: I?m sure the atmosphere of the team and the way to work will be on-point.

"Yamaha have more than proved their competitiveness in the last couple of years and it has been impressive to see how they have grown and invested back into MXGP; it feels like a good time to be 'Blue' again."

The Scot has ?previous history? with Arnaud Tonus as the friendly duo were part of a British Monster Energy backed Yamaha team in 2012, with Simpson on the YZ450F and Tonus on the YZ250F in MX2. The Swiss was vying for the 2014 MX2 World Championship until suffering a shoulder injury and then chased his American dream before a timely return to the FIM series.

"It's a different class for me and even a different championship now with twenty GPs," said Tonus. "I'm happy to be back and of course I have my base over here so things are easier from that side.

"It will be a long season with a lot of competition on the 450 and so a big challenge but I'm really pleased to be with Yamaha again and Louis was very motivated to make this deal happen. I hope we can have good preparation and a decent winter of work.

"I'll be based between Belgium and Switzerland where I have a nice facility for practice. We're talking at the moment but I think the Geneva Supercross will be my first race on the Yamaha so we've got that to look forward to and I hope to get on the bike in the next two weeks," he concluded.