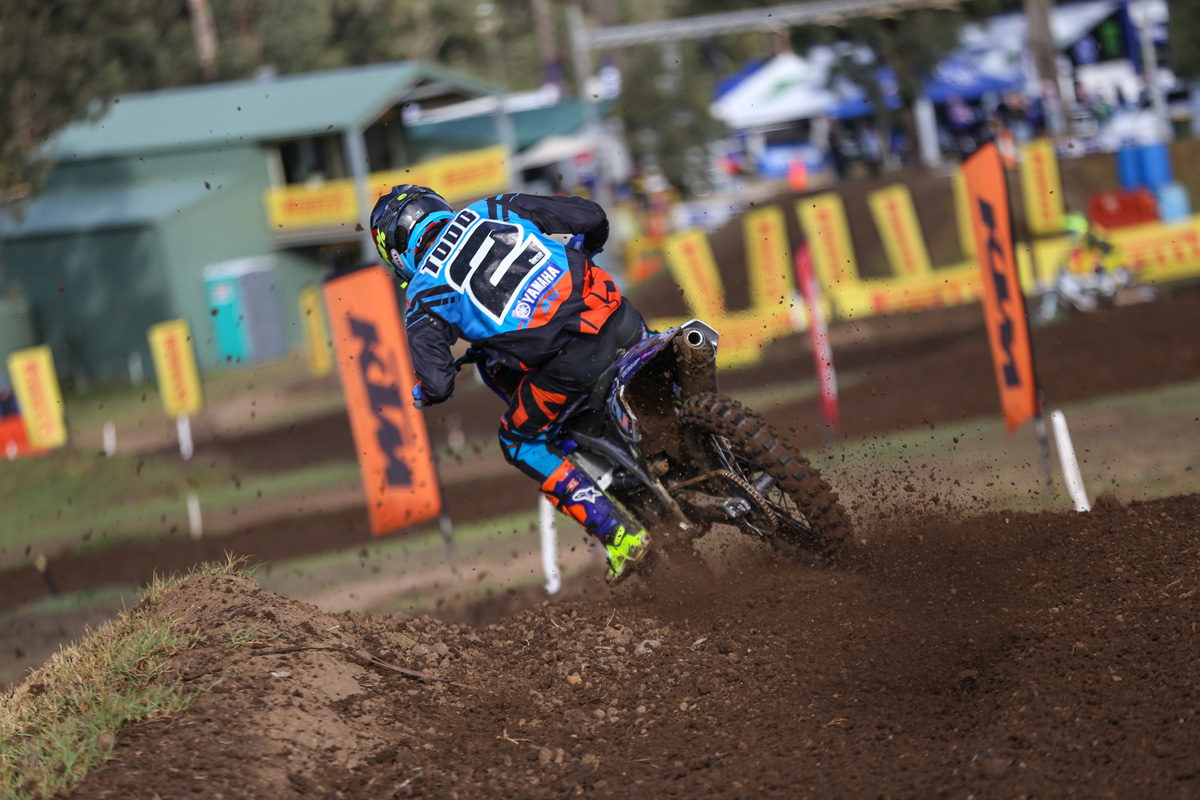 Serco Yamaha‰Ûªs Wilson Todd made a glorious return form at rounds three and four of the MX Nationals, where he surged to the top of the MX2 (250cc) championship, after a season defining weekend at the challenging Wonthaggi circuit in Victoria.

After facing a hard pack and slippery round one and a clay based rut fest at round two, riders faced soft and loamy conditions at the MX Nationals for the first time this year and with two rounds held over the weekend, it certainly changed the shape of the MX2 championship.

Todd had an inconsistent start to his weekend where he claimed pole position and the all-important first pick of the starting gate for moto one. But he didn‰Ûªt get the jump he required and was buried mid pack in the early stages of the race. But even when he was able to some clear track, he wasn‰Ûªt able to really impact the race and had to settle for an uninspiring seventh place.

But this disappointment on moto one sparked a fire inside the North Queenslander and with a head full of steam, he kicked it up a gear or two for the remainder of the weekend. He charged to the lead in moto two on Saturday and never let it go where he combined 7-1 results saw him land in third spot on the podium but more importantly, gain some confidence in his riding.

Sunday came and despite the wet conditions, there was simply no stopping Todd and he claimed both race victories and with it his first-round win of the season. The three wins from four moto starts results, combined with a tough day for team mate and previous red plate holder, Nathan Crawford, now sees Todd in the championship lead with a 16-point margin of his Serco Yamaha stable mate.

‰ÛÏGetting that race win on Saturday was just a relief and a reminder to myself that I can win races and this is where I belong. The last two months I have put in plenty of hard work so I knew that it was coming and I was improving, I just needed to get that first win on the board and really kickstart my season.

‰ÛÏTo come into the weekend so many points down, but to leave with a 16 point lead is hard to believe but that‰Ûªs how it goes sometimes and I really need keep working hard as there are plenty of riders in the MX2 class capable of winning races and big points swings won‰Ûªt be uncommon if you are having a bad day or have issues.

‰ÛÏThank you to the Serco Yamaha team and all our sponsors for the long hours in the lead up and over the weekend. My YZ250F was sweet and my focus now is to keep the momentum rolling at Murray Bridge next week.‰Û