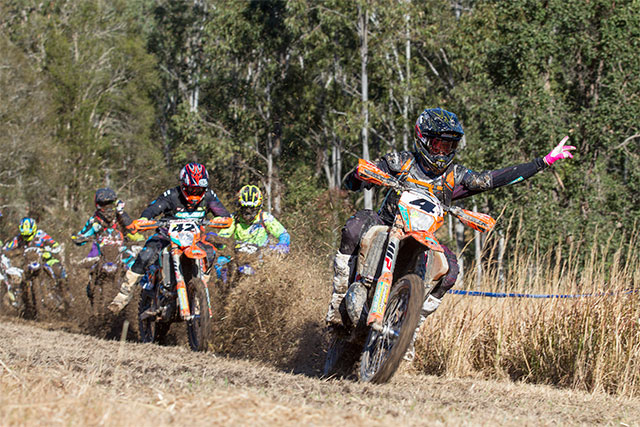 As the sun cast over the Monkerai hills just short of 9:00am this morning it was KTM Enduro Racing Team‰Ûªs Daniel Sanders who launched off the line in familiar fashion to claim the first hole shot of the morning at Rounds 9 & 10 of the 2016 Yamaha Australian Off-Road Championships this weekend.

The Championship E3 competitor Sanders led athletes in the Championship E1, E2, E3, Transmoto EJ and the Vets classes through the first lap of this testing and trying 3 hour Cross Country Race. Followed close in suit was KTM Enduro Racing teammate Tye Simmonds while KTM mounted Jack Simpson launched himself in to third in the hope to maintain his position for the three-hour long stint.

By the half way mark of the race the teams were instructing their riders to pull in for fuel stops and in a dash they were back out on the track ensuring no time was lost.

Sanders and Simmonds were still out in front with a comfortable lead with one and half hours to go under the hot New South Wales sun, however three fuel stops by Simpson relegated him down in positions allowing the speed of Active8 Yamaha Yamalube rider Beau Ralston to step straight into third position outright.

And at the conclusion of the race it was hole shot getter KTM Enduro Racing Team‰Ûªs Daniel Sanders who remained consistent the whole race, taking on the pristine conditions to ride home in a comfortable first position outright and in the E3 class by almost over one minute in front of team mate Simmonds (E2).

In the Championship E1 Class it was Jack Simpson who was victorious despite three fuel stops throughout the race and a pit lane penalty. Husqvarna Enduro Racing Team‰Ûªs Glenn Kearney finished second in his class, describing the track as ‰ÛÏhard‰Û