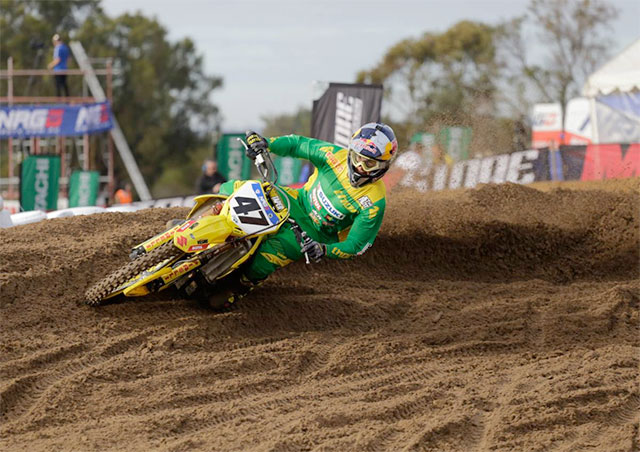 Despite a challenging day at the track for Wilson Coolair Motul Factory Suzuki riders Luke Wilson and Todd Waters, the team has walked away with yet another Thor MX1 podium finish, and made up a position in the overall championship at Round five of the Motul MX Nationals at Wanneroo in Western Australia.

After heading in to the weekend on a wave of confidence, the Suzuki mounted duo had high expectations of themselves in the lead up to round five, however the gruelling Wanneroo track conditions proved to be a force to be reckoned with today, with both Wilson and Waters making the best of a difficult round of racing.

For Waters‰Ûª, round five delivered mixed results. After emerging as fastest during free practice on Saturday, Waters once again made it through to GoPro Superpole where he collected third, before racing to fourth, second, and fifth places across three motos to finish the round in third overall.

Despite a tough round, Waters managed to finish on the podium and make up a position in the overall Thor MX1 Championship. Waters now sits in second place on 334 points, only 17 points shy of the MX1 Championship lead.

‰ÛÏIt wasn‰Ûªt really my weekend ‰ÛÒ everything I did seemed to go wrong (laughs), but that aside, I was feeling really good in free practice on Saturday and I had the bike and my setup working well this weekend,‰Û