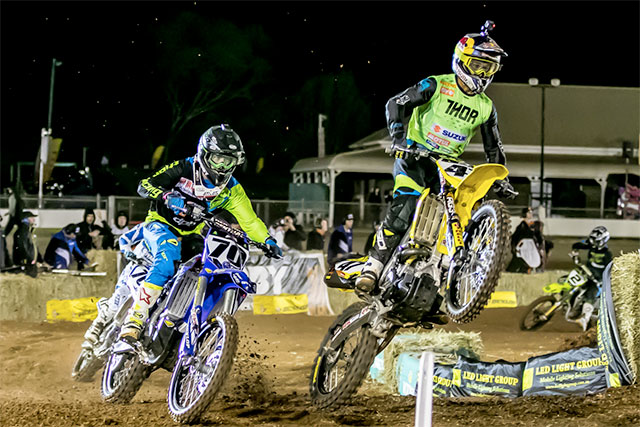 Wilson Coolair Motul Factory Suzuki riders Luke Wilson and Todd Waters are geared up for their first interstate instalment of the 2016 Australian Supercross Championship, with Round 3 of the series taking place at Wayville in South Australia this Saturday night.

After a difficult outing just two weeks ago at Toowoomba, both SX1 Factory Suzuki riders Wilson and Waters have put the last round behind them, and will be aiming for improved results when the team roll out in Adelaide tomorrow.

Todd Waters, who led most of the main event before a crash in the whoops at Round 2 hindered his charge, shared that after knowing the speed he carried at the team's last outing, that he's eager to get back behind the gate tomorrow night.

"Last round we had that crash in the main, but that's all behind me now - I'm healthy, fit, and ready for this round that's for sure," Waters shared.

"I won my qualifying race at Toowoomba and we had awesome speed throughout the majority of the main event, so I'm feeling confident and I'm just keen to go racing.

‰ÛÏThe track at Wayville is looking pretty good so far, so hopefully I can put together a solid 20 laps tomorrow night and finish with a good result for the team."

For Waters‰Ûª teammate Luke Wilson, Round 3 will provide yet another opportunity for the Queenslander to collect valuable championship points, and says that despite having limited bike time due to a recent wrist injury, that he's looking forward to tomorrow night.

‰ÛÏAfter the last round I actually hurt my wrist, so I haven't had much time on the bike, but I've been making up for it with lots of training off the bike so i'm looking forward to this weekend," Wilson shared.

‰ÛÏThe track at Wayville looks like it will suit me alot, so hopefully I can go out there, and have a good heat race and main, and finish with another solid result.

"At the moment I'm sitting in a really good position in the championship so the plan is to keep that momentum going at this round in South Australia too."