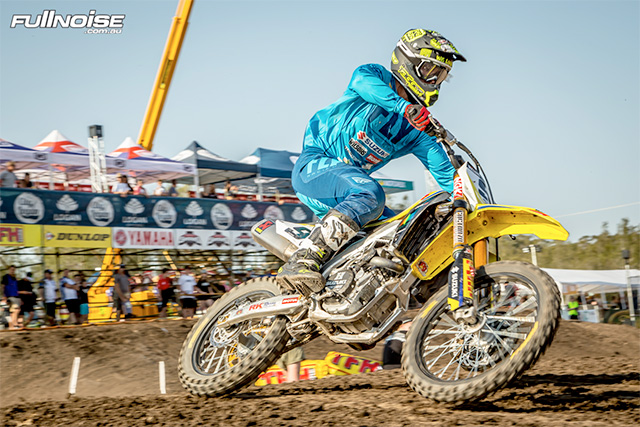 Wilson Coolair Motul Factory Suzuki‰Ûªs SX1 riders Nick Schmidt and Luke Wilson have taken the positives from the first round of the 2017 Australian Supercross Championship after surviving a tough night at the season opener at Jimboomba, QLD.

With the Queensland round of the championship marking American import Schmidt‰Ûªs first outing for the team, as well as Wilson‰Ûªs first race back after taking the year off racing, both of the Factory Suzuki riders had aimed to leave the event safely, and with some positive results to their name.

With round one also marking the Australian debut of the 2018 Suzuki RM-Z 450 on the race track, the team showcased the new machine in all it‰Ûªs glory under the truck to thousands who attended the pit party before racing got underway last night.

American Schmidt showed impressive speed from the minute he hit the track at Jimboomba yesterday, qualifying in sixth position in the seeded SX1 category, then racing to sixth again in his heat race and wrapping up the main event just outside the top ten in 14th. Despite the round one result falling short of Schmidt‰Ûªs expectations, he is confident that as the season goes on he will put Suzuki on the SX1 podium.