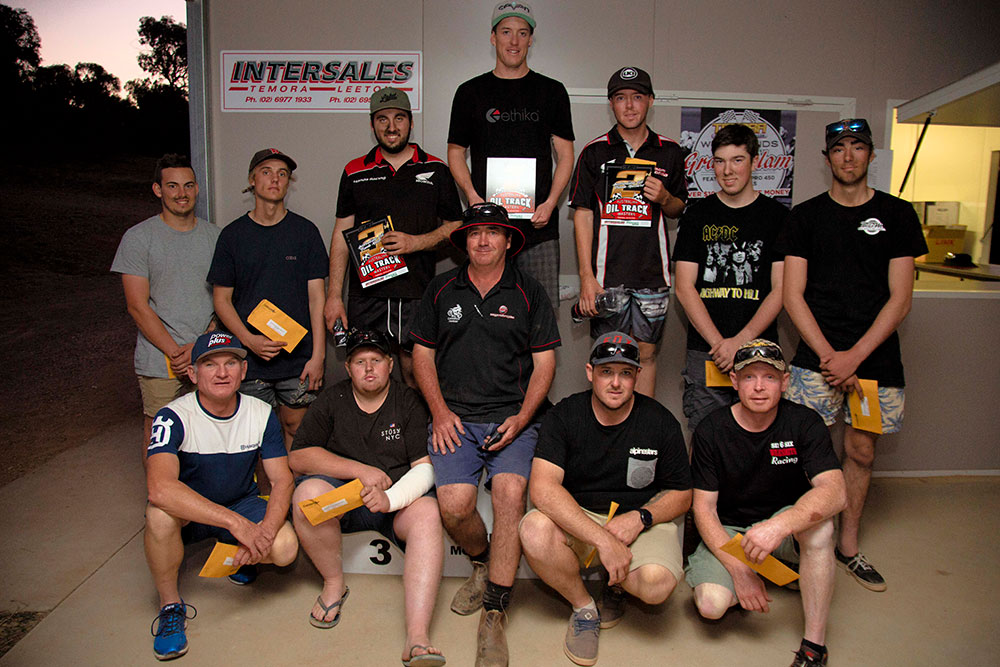 11 of the 12 finalists in the (senior) Australian Oil Track Masters. Pic by Bill Mcfarlane
Two days, two tracks, plenty of winners and exciting racing for fans ‰ÛÒ that was the outcome as the West Wyalong and Temora tracks turned on an exciting two days of dirt track racing over the weekend.

The big winners in the Australian Oil Track Masters were former Australian champion Marty McNamara from Gunnedah in the seniors, Singleton 13-year-old Ryan Smith in the juniors and West Wyalong combination of Matt Davies and passenger Paul Cooper in the emotion-charged dirt track sidecars.

There were plenty of challengers for McNamara before he emerged as a deserving winner of the main event. Staged over three 8-lap races the Oil Track Masters feature saw McNamara edge out West Wyalong duo Tom Herrick and Matt Davies.

Unfortunately the final race saw Kempsey rider Michael Booth fall, to become the second rider to be transported to hospital on the day , after earlier teenager Laura Saxon had crashed heavily.

Ryan Smith was the stand-out performer in the 13-16 years age bracket, despite the efforts of Callan Butcher of Griffith, Kruze Brady of Leeton and Remmie Fyffe from Albury.

There was only a small field of dirt track sidecars but they thrilled the crowd in all of their rounds, particularly in what was acclaimed the ‰Û÷race of the weekend‰Ûª at West Wyalong on Saturday.

Matt Davies took over the handlebars from Paul Cooper for the weekend and they emerged as winners on a machine carrying the number #414 which was carried to great success over many years by Matt‰Ûªs late father Anthony.

Plenty of support classes added to the exciting racing over the two days.

McNamara added to his feature race victory to win the Pro 450 and Pro Open classes, both times ahead of Temora star Ashley Wilesmith, who also won the Over 35s class.

Matt Davies edged out McNamara in the Shoot-Out, while there was plenty of success for youngsters from the Riverina area.

Tom Herrick won the Pro 250 class, while Temora teenager Derek Hingerty won both the Under 19s and the C Grade classes.

A busy weekend for Ryan New was rewarded with just one third placing, while Thomas Morton was another Temora rider to show out well.

Despite a cloudburst that cut short the final round of racing at West Wyalong on Saturday and the racing accidents at Temora, both clubs were pleased with the outcome of the weekend and will work towards staging the Oil Track Masters again in 2019.