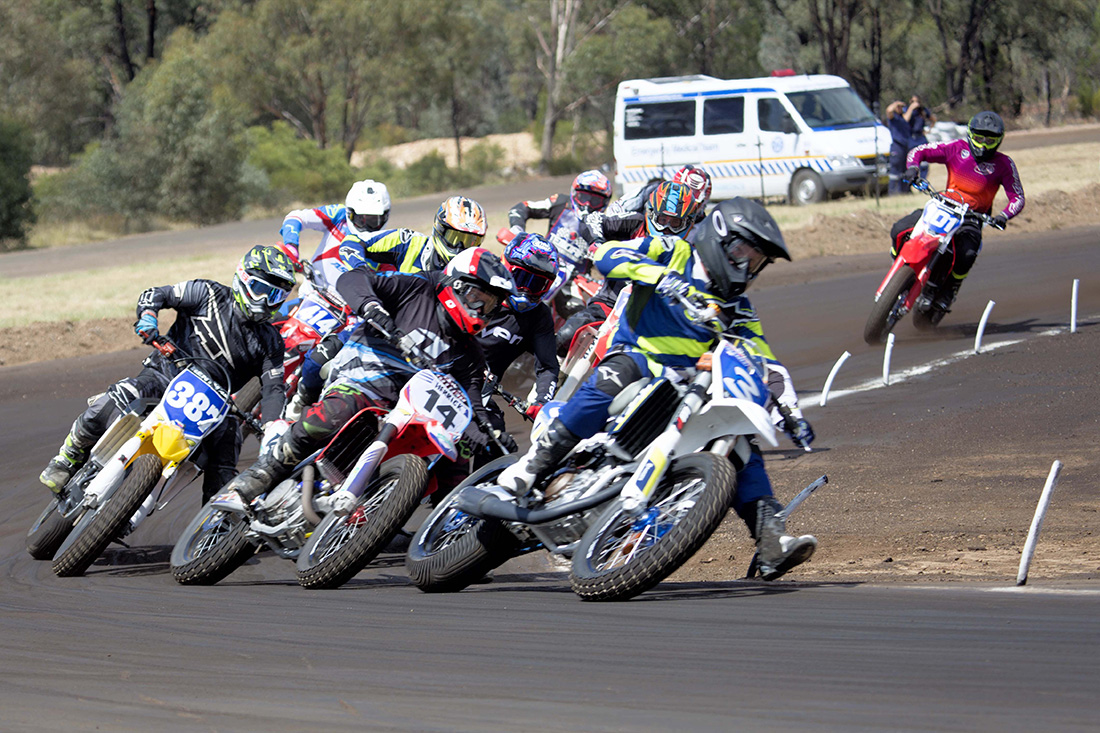 Paul Caslick leading the pack at a previous meeting at Temora. Pic by Bill McFarlane
West Wyalong and Temora will share the spotlight this weekend with two days of dirt track motorcycle action which has attracted some of Australia‰Ûªs best senior and junior riders.

The Wyalong Motor Sports Club and the Temora Motorcycle Racing Club will jointly stage the 2018 Oil Track Masters for seniors, juniors and sidecars, as well as support events, across the weekend with one day of racing at each venue.

The Lone Pine Speedway at West Wyalong starts proceedings on Saturday (April 21) before the Woodlands Speedway at Temora will wrap up the weekend on Sunday (April 22).

Among the entries are Australian Championship winners Paul Caslick from Newcastle, Marty McNamara from Gunnedah and West Wyalong rider Matt Davies, and several others who have gone close to winning national titles like Ian Hamilton from Canberra and Michael Booth from Kempsey.

West Wyalong teenager Tom Herrick made a successful return to racing at Gunnedah last month and he looms as a major player this weekend, while experienced oil track racers like Anthony Dall of Gunnedah and a strong contingent form the Temora club are also likely to be prominent.

The vastly experienced brothers Ashley and Luke Wilesmith lead the Temora ranks and will be joined by young guns Ryan New, Ben Miller and Blake and Derek Hingerty.

The Junior Masters event for the 13-16 year olds should be as hard-fought as the seniors with last month‰Ûªs Casey Stoner Cup winner Ryan Smith of Singleton doing battle with riders from the south of the state headed by Callan Butcher from Griffith, Kruze Brady from Leeton and Remmie Fyffe from Albury.

Australian champions Cameron Dunker from Kurri Kurri and Tom Drane from Forbes are among the entries for the younger junior classes, while Beau Bailey from Forbes and Archie McDonald from Albury are others in good form recently.

The Dirt Track Sidecar Masters will take on extra significance as the West Wyalong meeting will be the first open meeting since the death of former Australian champion Anthony Davies.

As well as 2-wheel competition, Matt Davies will also pilot the #414 sidecar formerly ridden by his father, while Anthony‰Ûªs brother Shane will also compete. Action both days commences at 9am, with a popular Shoot-Out competition scheduled to conclude racing on both days.