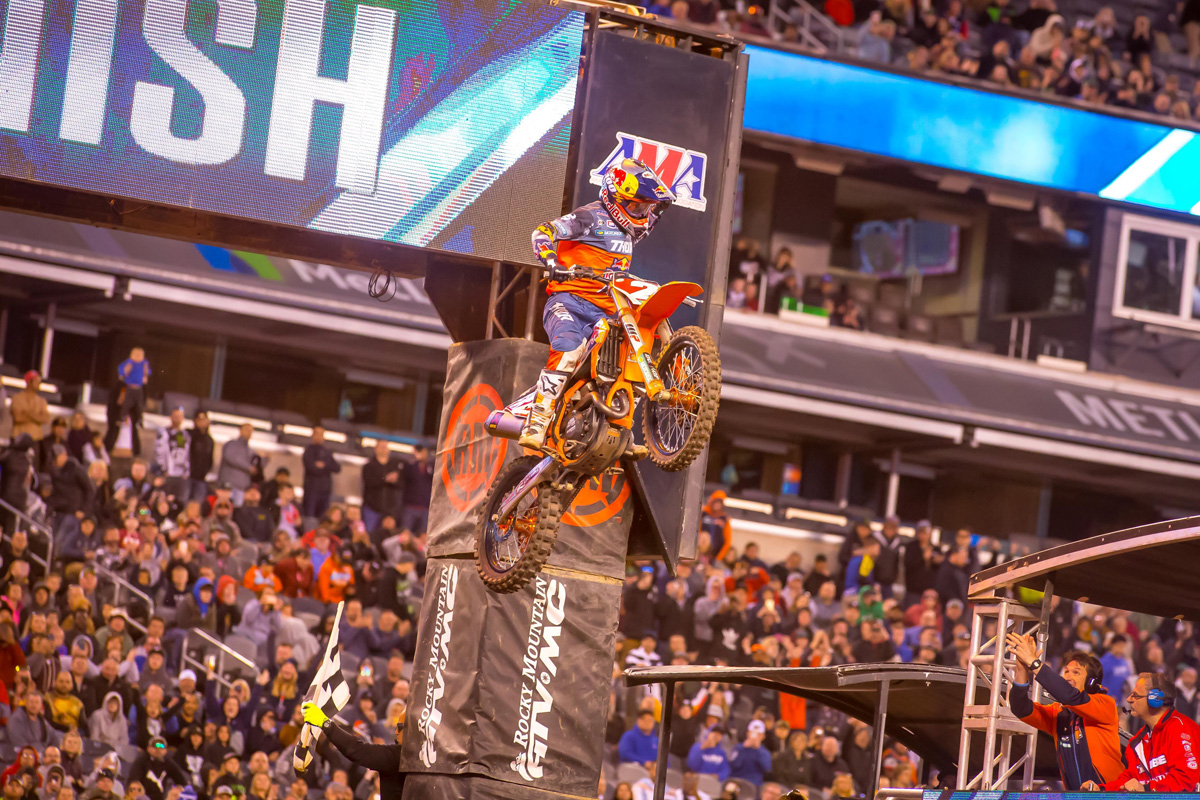 Cooper Webb only needs 3 points - 18th place finish at Las Vegas to warp up the 2019 Supercross Championship
Red Bull KTM's Cooper Webb has one hand on the 2019 Monster Energy Supercross championship trophy after racing to victory at the penultimate race of the season held at East Rutherford New York.

In a thrilling race that had the crowd on their feet from start to finish, Webb claimed the main event holeshot and commanded the lead of the race, while championship rival and team-mate Marvin Musquin's championship run officially came to an end, as the French racer crashed in the first turn.

Webb's closest championship rival, Monster Energy Kawasaki's Eli Tomac, however, kept himself very much in championship contention and quickly moved into second position before attacking Webb for the race lead.

Tomac and Webb played a game of cat and mouse for a number of laps with the race lead changing a couple of times before Tomac built a comfortable lead.

At the halfway mark of the race, all of Tomac's hard work came undone with a crash in the whoops leaving him back in 5th place.

Up front, Webb came under pressure from Rockstar Husqvarna's Zach Osborne with the 450 rookie taking the lead away from Webb and looked on track to claim his maiden 450 victory until a mistake pushed him back to third.

Blake Baggett was the next rider to move into second place, but a fast charging Tomac had other ideas and worked his way back into second position to keep his championship hopes alive, while Baggett took his turn at a dirt sample.

With the race coming to a dramatic conclusion, Tomac for the second time in the race crashed in the whoop section, allowing Webb to cruise to a comfortable victory ahead of Osborne with Tomac able to recover and finish on the final step of the podium.

Bagget crossed the line in 4th, while Musquin recovered from his first turn fall to finish in 5th.

‰ÛÏOverall, I felt like it was a good race," Webb commented. "I felt like I rode in a nice pace that was consistent and I‰Ûªm not saying that the other guys weren‰Ûªt, but the mistakes they made were definitely the difference.

"I‰Ûªm happy, another win is incredible, and we‰Ûªre inching a little closer to the final goal.‰Û 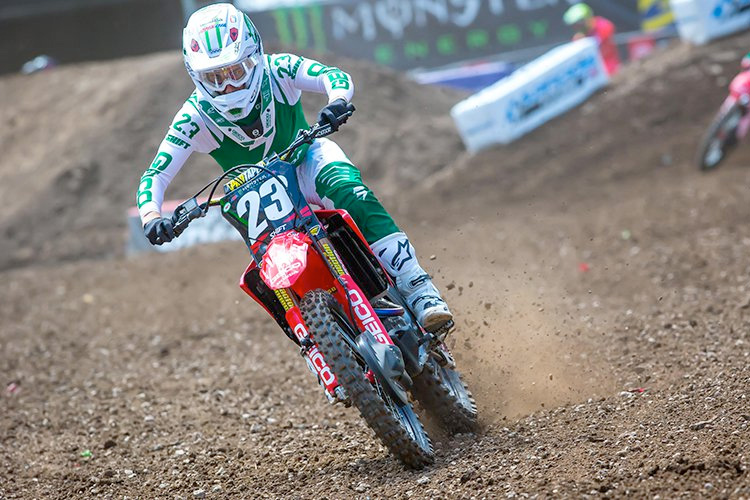 Sexton on his way to his maiden 250 win and championship lead
In the 250 East main event, it was Pro Circuit Kawasaki's Martin Davalos who took the early control of the race, while injured team-mate and points leader heading into the race, Austin Forkner put nudge and run pass on championship rival Chase Sexton to slide into second position.

Forkner despite carrying a severe knee injury looked as though he was going to challenge Davalos for the race lead until he over jumped a jump landing in the face of another, then left the track in obvious distress and his championship hopes all but over.

While Forkner headed back to the team truck, Geiko Honda's Sexton took full advantage of the situation, moving his way into the lead and racing to his maiden 250 Supercross victory and the championship points lead.

Behind him, both Monster Energy Yamaha riders, Mitchell Oldenburg and Justin Cooper moved their way into second and third respectively and held position to race end.

In the championship standings, Sexton carries a nine-point lead over Cooper, with Forkner 22 points behind the new series with a mathematical but unlikely shot at winning this year's title.

The top 20 riders from both the East and the West 250 classes will face off with two titles on the line in one super final where Adam Cianciarulo will battle it out with Dylan Ferrandis with Cianciarulo holding an eight-point advantage in the West standings. 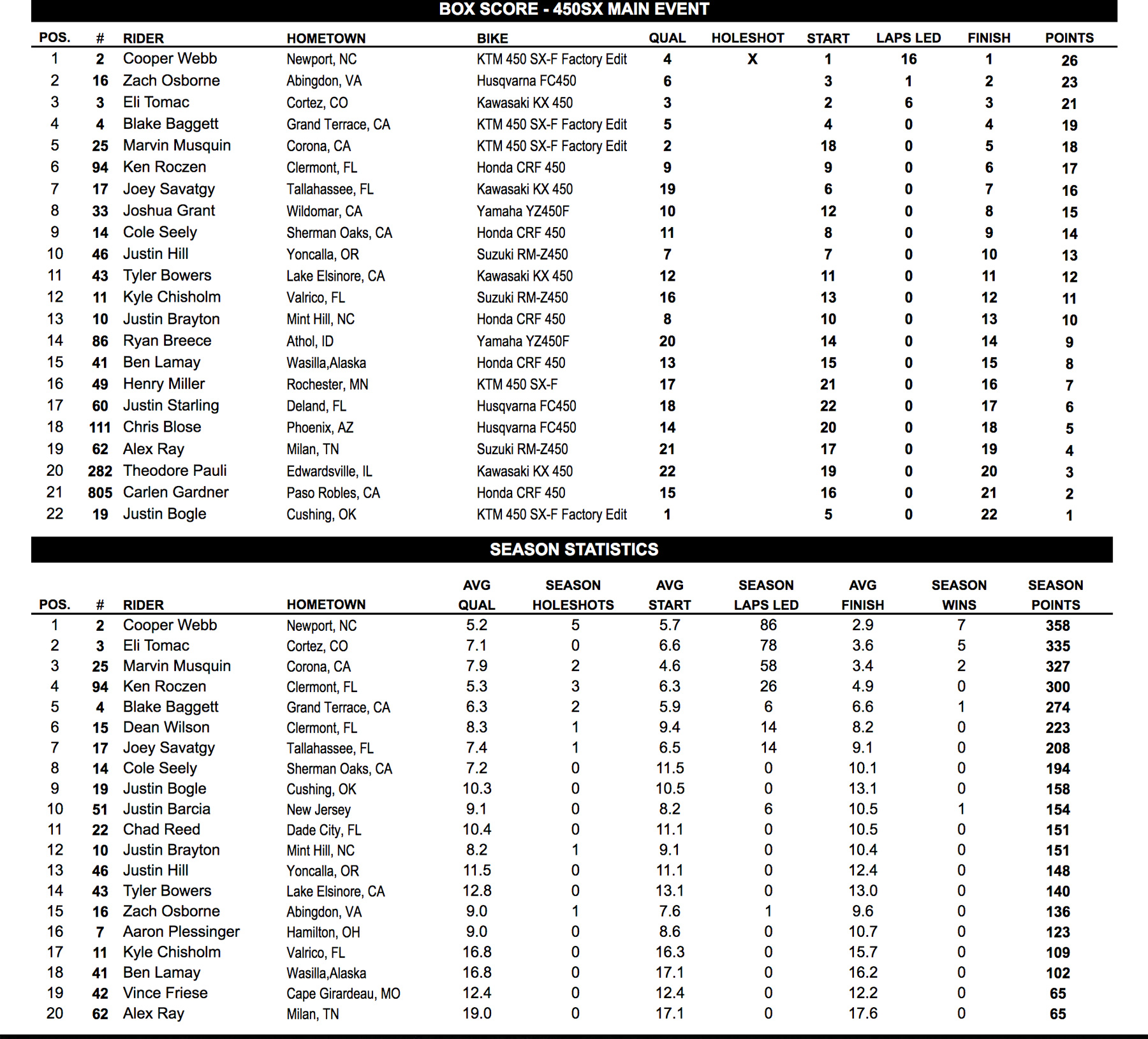 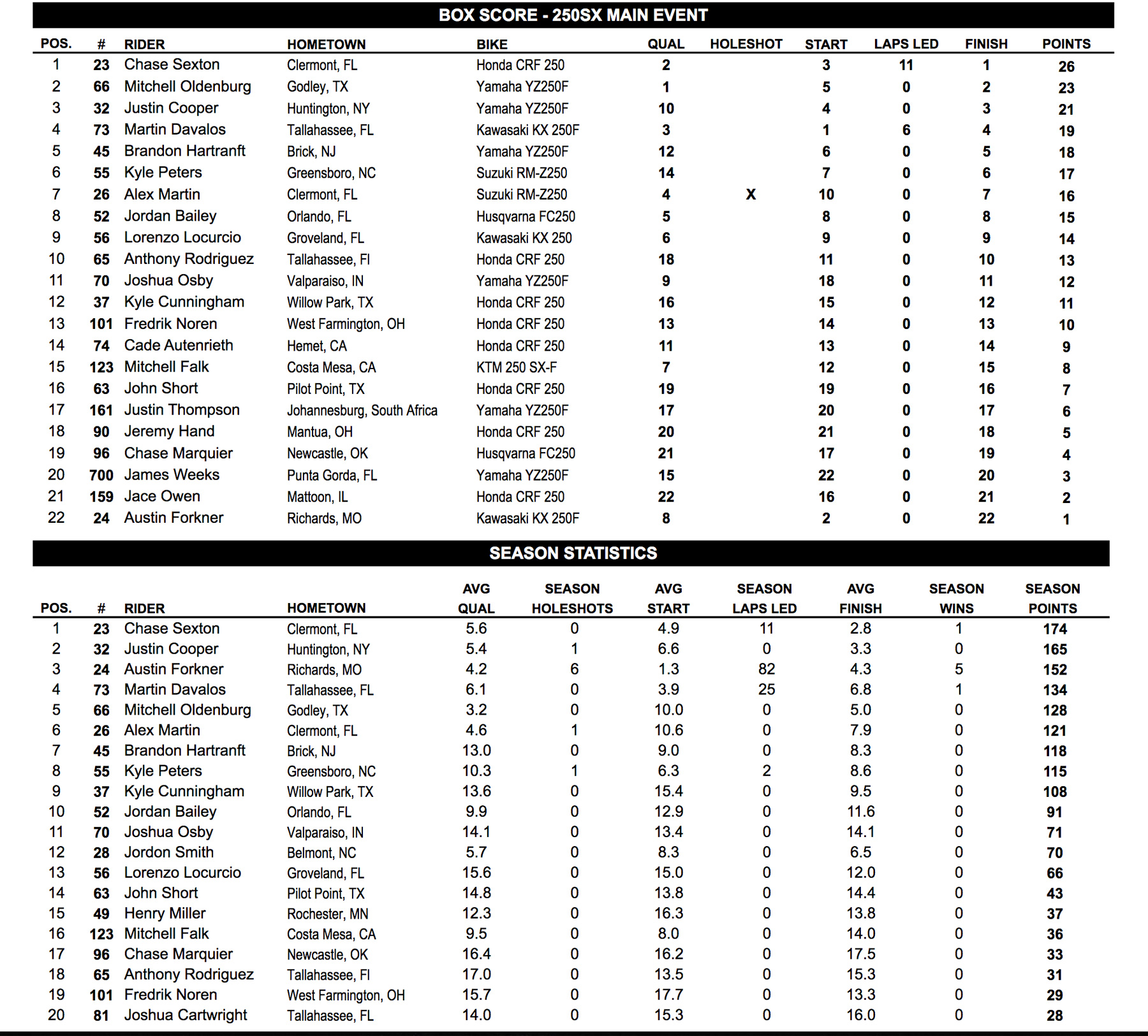