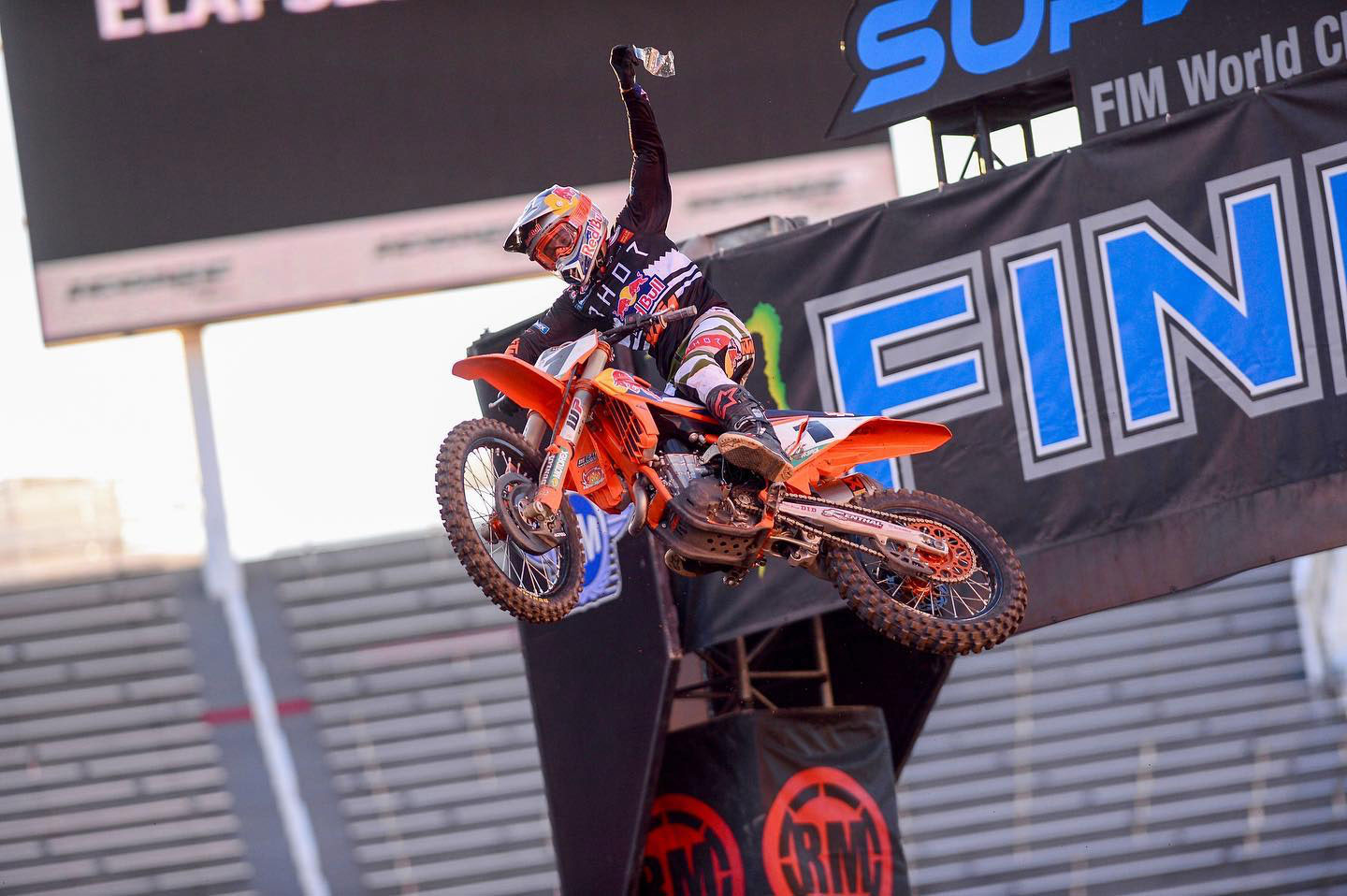 Cooper Webb took his fourth win of the season to deny Eli Tomac the title. Photo: AMA Supercross
Cooper Webb has denied Eli Tomac the chance to wrap up the 2020 AMA Monster Energy Supercross title after taking the win at the penultimate round in Salt Lake City while Chase Sexton strengthened his lead in the 250SX East Coast with a strong win.

As the gate dropped for the second last time of the season, the 450SX class riders came out of the first turn with some big stories. Rockstar Energy Husqvarna's Zach Osborne lead over Justin Brayton and Josh Hill. Cooper Webb was the best of the title contenders in fourth, HRC Honda's Ken Roczen was next best in seventh while Championship leader Eli Tomac was dead last going through the first turn! With it, all to do to claim the championship by the end of the of the twenty-minute main the Monster Energy Kawasaki rider was quickly into the mid-pack by the end of the first lap and gunning for the front.


Webb and Roczen quickly got by Hill, who was riding with a hand injury, while Tomac was in a battle with Blake Bagget for tenth but was still eight seconds of the lead and a lot of riders between him and the 2020 championship. Cooper Webb moved up to second place and Roczen into third, courtesy of HRC Honda team-mate Justin Brayton holding back and making it easy for the German.

As the track began to open up from the heavy traffic, Tomac started to move forward in a more methodical way. Roczens team-mate Brayton didn't make it easy - as would be expected - but he didn't play hardball and Tomac was soon past and into fifth and honing on on next target Jason Anderson. Meanwhile, out front, Osborne was still controlling the race with Webb and Roczen only a couple of seconds away. 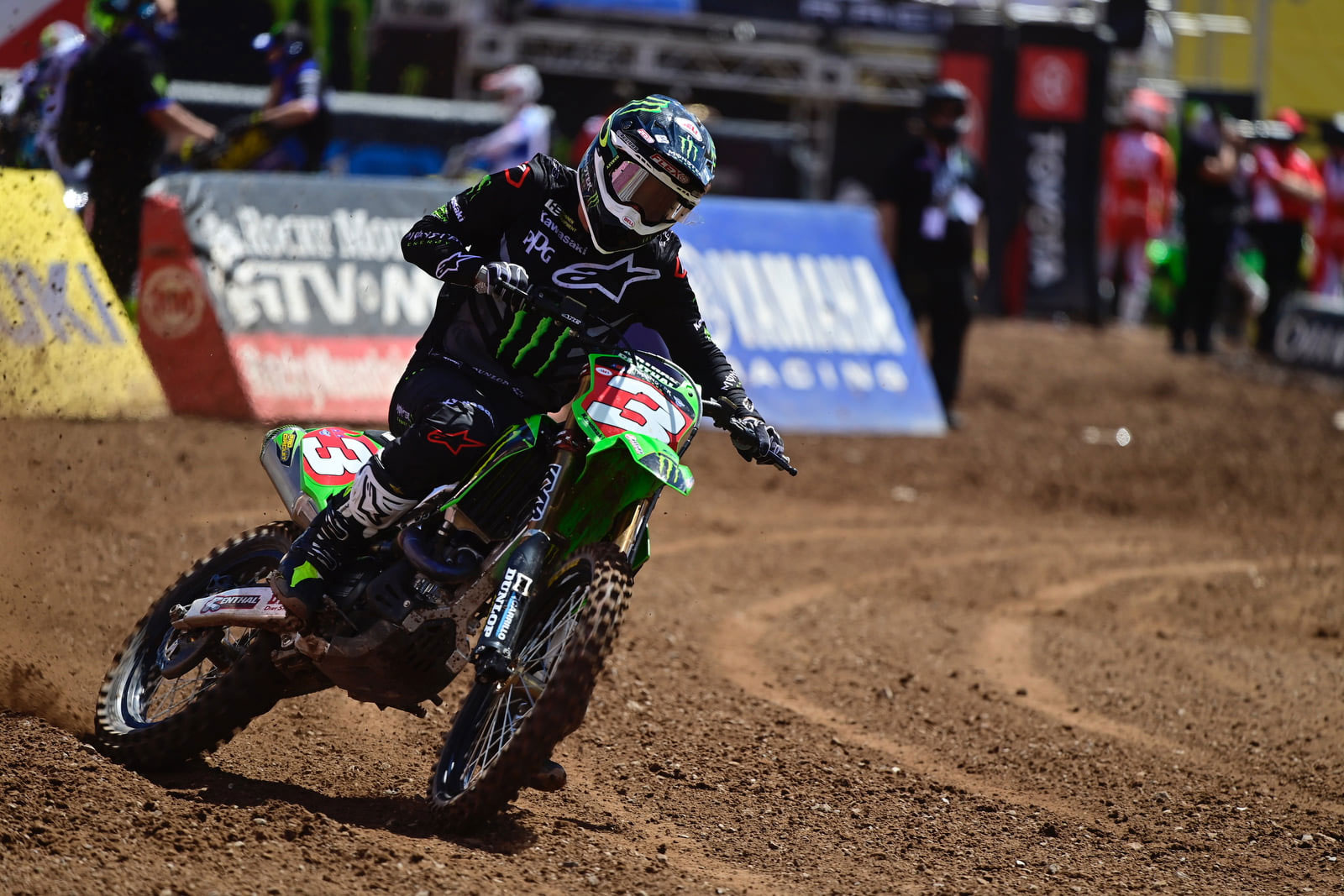 Eli Tomac mounted a hard charge through the field from dead last but fell one spot short of wrapping up the 2020 title. Photo: AMA Supercross
At the halfway point Tomac couldn't get the better of the 2018 champion Anderson, but both were only a few seconds adrift of Roczen with plenty of time still remaining. Tomac did eventually get by Anderson and then set out after his championship rivals. It only took a few laps for Tomac to get by Roczen, Roczen countered a couple of times before Tomac broke the draft of the German.

With six minutes left on the clock, leader Osborne, Webb and Tomac ran 1-2-3 with only a bike length between them. Lappers were coming into play as it became a fast moving game of chess! Osborne was the first to crack and a small mistake, courtesy of a front wheel skipping out on him, saw him drop to third. With three minutes to go, Tomac had to pass Webb to wrap the championship up.

Try as he might Tomac just couldn't haul Webb in the final laps with the Red Bull KTM rider going on to take his fourth win of the season and third Wednesday night win for a clean sweep of the Wednesday night races. Tomac was second after an impressive ride from the back of the pack while Osborne held onto third in another impressive ride while Roczen and Anderson rounded out the top five.

Asked what it was like to come under the immense pressure Tomac was putting on him Webb said, "I wasn't really thinking about that too much. I was just hitting my marks and trying to see where I could be a little bit better. We were all really close speed wise with not a lot separating us. I fixed the whoops about halfway, and I think that was holding me back. It's a great night and great to get another win."

"I felt better on this track today for making passes. I was pushing hard, hard as I could" Tomac said, "I did everything io could, I couldn't quite get there, but it was a really good day for us."

Despite finishing second Tomac all but has his hand on the 2020 crown only needing a few points to wrap up the title at the final round on Sunday. Webb's win sees him move back to second in the standing with a six-point advantage over Roczen. 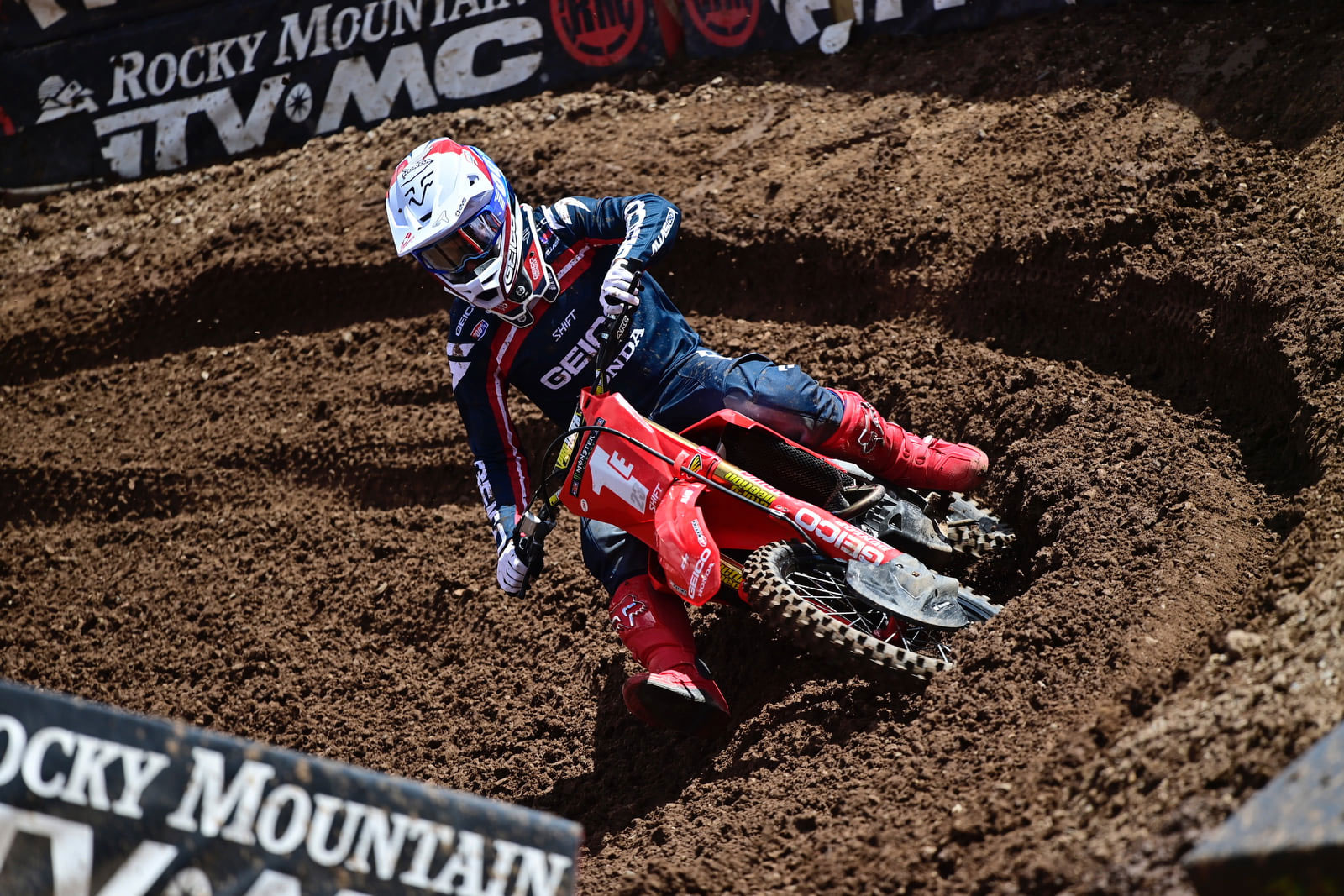 Monster Energy rider Darian Sanayei was the surprise holeshot winner in the penultimate round of the 250SX East Coast class with heat winners Shane Mcelrath and Geico Honda's Chase Sexton hot on his heels which bode well for an entertaining fifteen minutes ahead. Both the championship contenders got by the Kawasaki rider within the first lap and set out to make a break on the field. Troy Lee Designs- Red Bull- KTM's Pierce Brown was third.

Things settled for the first third of the moto with not much in the passing department happening anywhere on the track until Sexton made a decisive move for the lead. The move ran the Start Yamaha Racing rider high into the berm which was enough to give Sexton some breathing room and establish a few bike lengths gap to stop any counter move by Mcelrath. Brown still had a firm hold on third three seconds back while Colt Nichols sat eight seconds of the lead in fourth.


With half the race down Sexton started to ease away as Mcelrath began to make a few uncharacteristic mistakes. The only on-track action was a charge by Colt Nichols who was closing in on Brown for the final podium position.

The final half of the race became somewhat of a procession with Sexton going onto take a flawless six-second win with the 20-year-old extending his points lead to six points in the championship over McLerath with one round to go. Nichols got by Brown in the final laps to finish third, sixteen seconds off Sextons winning time.

"Overall, I felt really good out there. It was a super fun race tonight," Sexton said. "The hardest part of the race tonight was figuring my way around the lappers. I am now looking forward to the shootout."

"That was a good race, I felt like I pushed hard, Chase just had a little bit of an edge on me," McLerath said of his second place. "I just didn't connect stuff and had too many mistakes. I would start reeling him back in then screw up or get caught up with lappers. It's a little disappointing with second, but man I felt like I rode hard and tried; Chase was just on it, so it's do or die for the showdown on Sunday. I'll be ready," he concluded.

The final round of the 250SX East Coast takes place next Sunday when the top twenty riders from the East and West meet for the season-ending 250SX showdown. 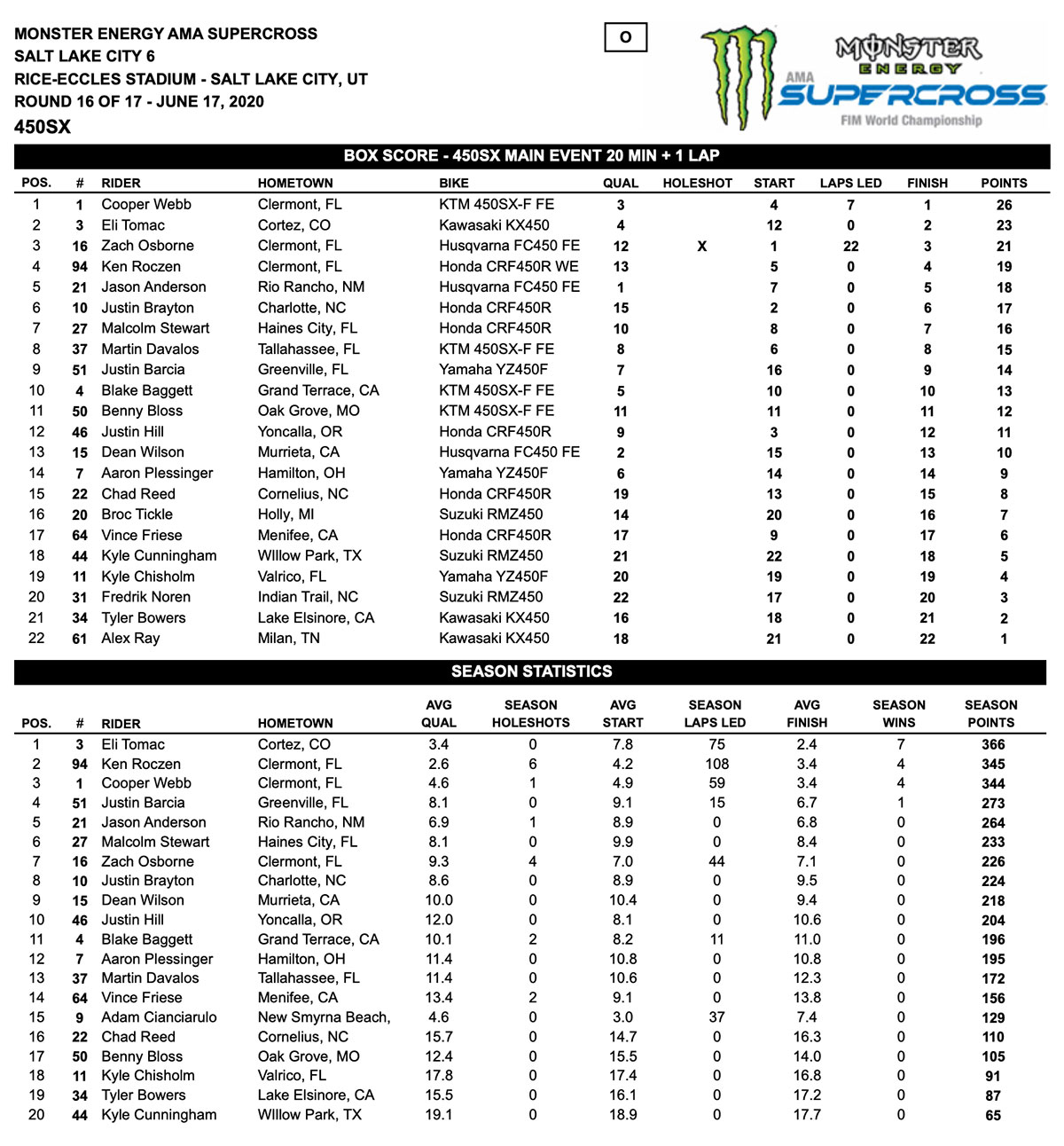 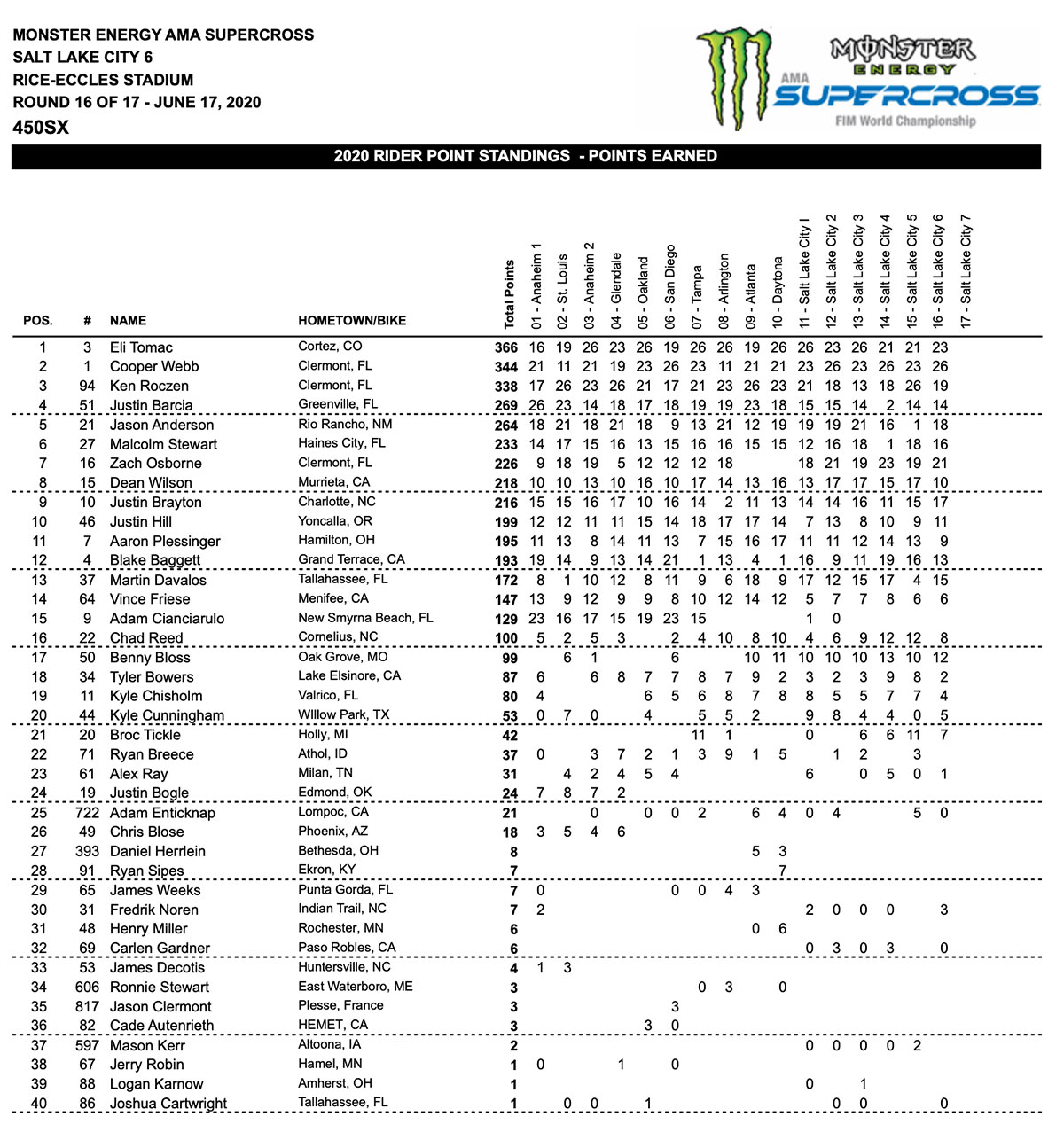 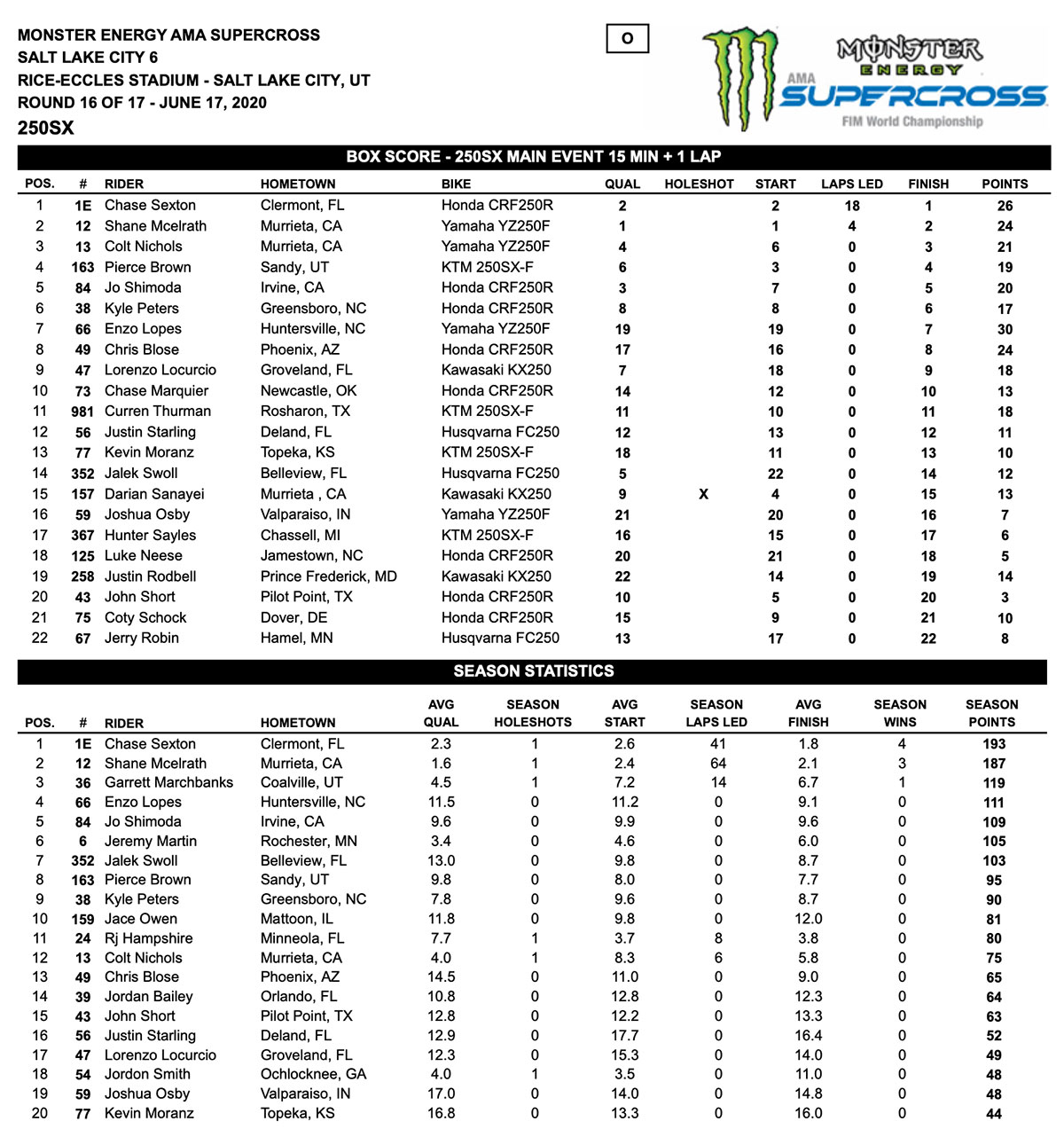 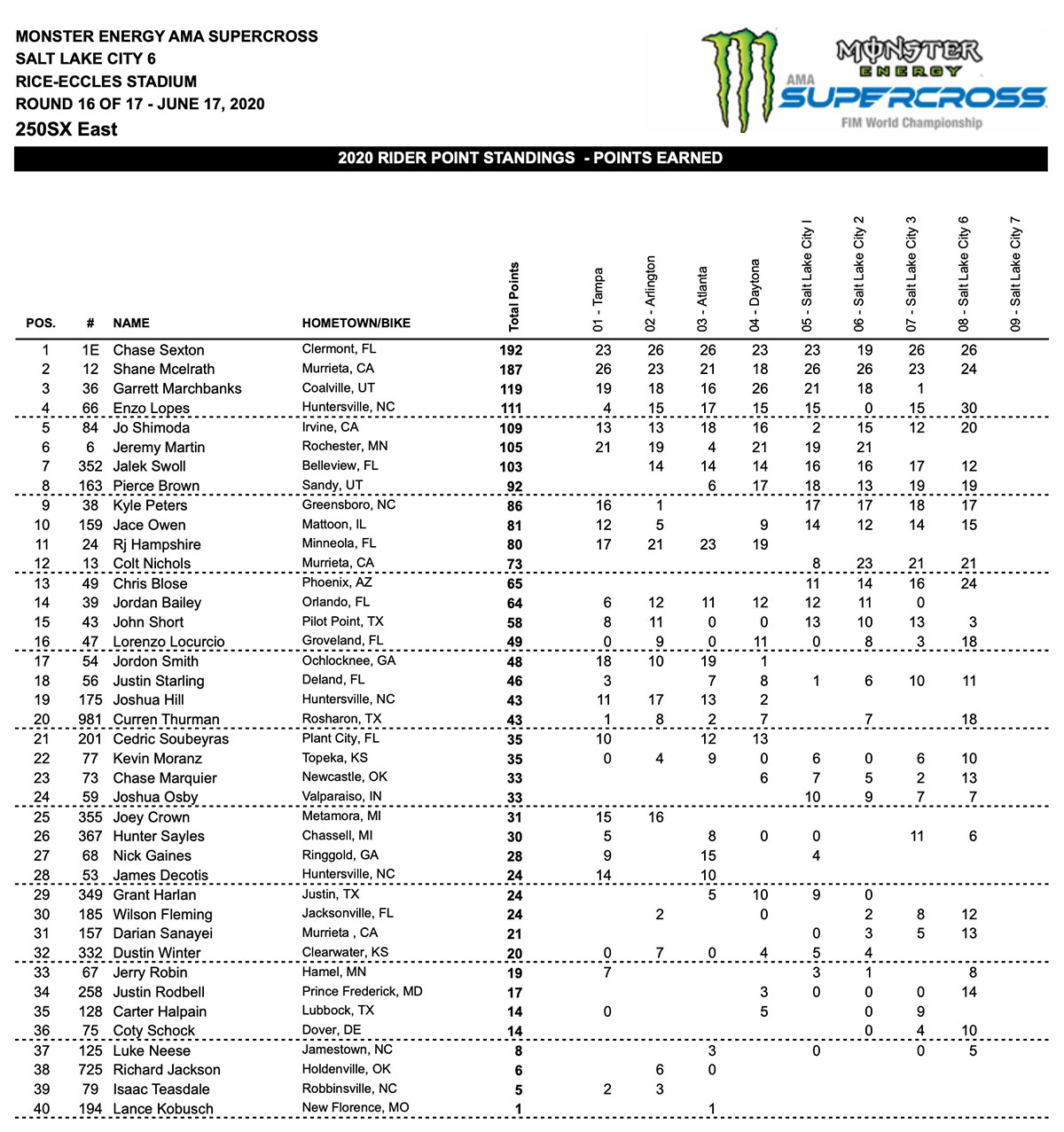