Webb fights back with dramatic round 15 450SX Atlanta Supercross win 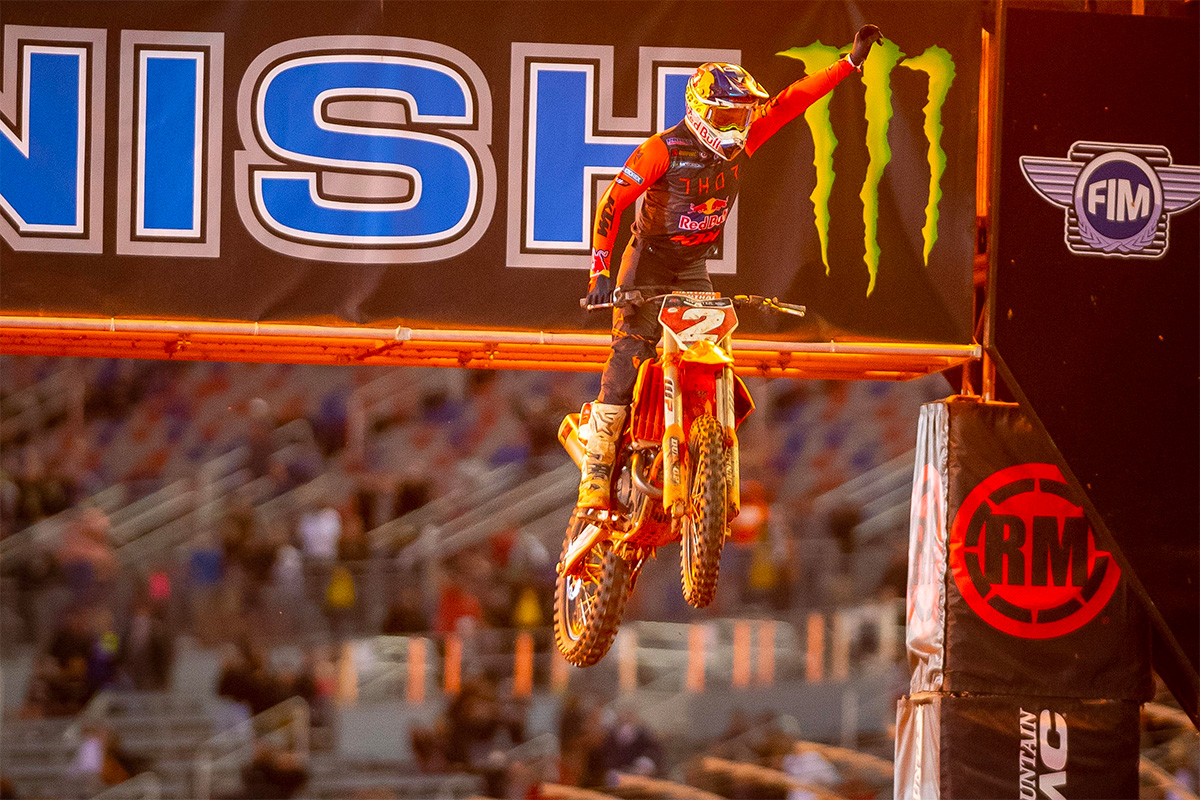 Cooper Webb delivered again with a brilliant race to earn his seventh win of the season and stretch his points lead to 16 with two rounds remaining. Photo Credit: Feld Entertainment, Inc.
Round 15 of the Monster Energy AMA Supercross wrapped up three events at Atlanta Motor Speedway with Cooper Webb grabbing a thrilling 450SX Class win while Nate Thrasher took his second 250SX win.

Previous-round winner Ken Roczen led most of the race but settled for second and defending champion Eli Tomac fought forward and finally reached as high as third for a podium finish. The penultimate round of the Western Regional 250SX Class saw Nate Thrasher take his second career win in front of fans stretched across the grandstands in limited capacity, pod-style seating.


Heading into the third consecutive event on the high-speed track stretched out across the infield at Atlanta Motor Speedway, Cooper Webb enjoyed a 13-point lead in the series but hadn't looked in his best form on the red Georgia soil. When the gate dropped Aaron Plessinger jumped into the early lead with Roczen and fastest-qualifier Jason Anderson right on his rear wheel.

On the opening lap Dylan Ferrandis ran into the back of Anderson on a corner entry, sending both riders to the ground and ending their hopes of a win. Just over a minute and a half into the 20-minute plus one lap race, Ken Roczen passed for the lead and immediately started to distance himself from the pack. Six and a half minutes into the race Webb got around Plessinger but did not have the speed early in the race and Roczen continued to disappear on the track ahead. Webb was staying just out of reach of Plessinger, Justin Barcia and Tomac behind him.

Then with just under five minutes remaining on the race clock, Roczen got wild in the whoops and stepped off the bike. Roczen nearly stayed on his feet and remounted quickly, still with a comfortable lead. But all was not well. Roczen would tell later that his handlebar had gotten bent from the impact. Webb saw the opportunity and he broke away from Plessinger and Tomac and ate into Roczen's five second lead.

With 23 seconds on the clock, effectively two laps remaining, Webb charged through a sand section, dove under Roczen in a bowl turn, and cut down to close off any chance of a retaliation. One bobble late on the last lap added some drama, but Webb held on for the win that meant a six point swing in the points, had he not gotten around Roczen. 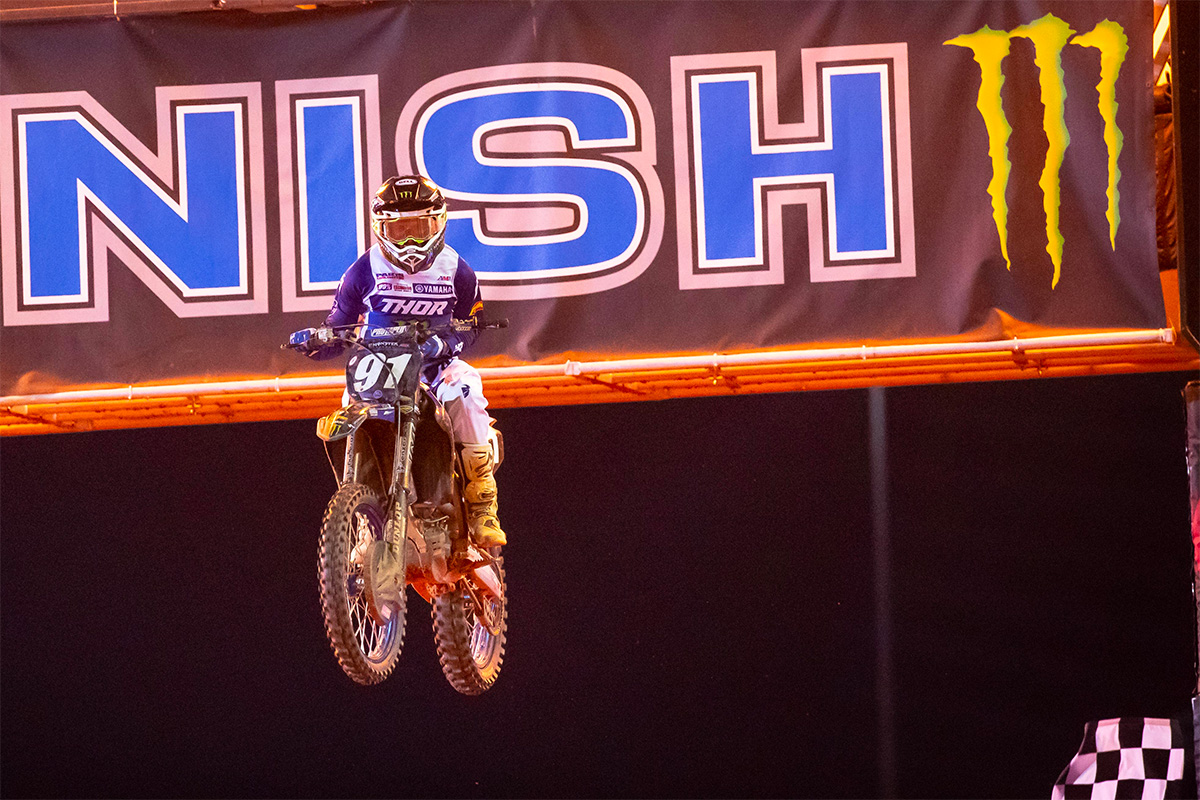 Nate Thrasher proved his victory at Round six was no fluke. He had the other racers handled with a convincing second career win. Photo Credit: Feld Entertainment, Inc.
The Western Regional 250SX Class delivered unbelievable drama and action but the winner of the night was Rookie Nate Thrasher. It was his second-ever career win after his first victory one week prior at the same venue. Making the first place finish even more dramatic, for the second time Thrasher had to qualify for the Main Event through the Last Chance Qualifier. In both cases the Yamaha rider won the LCQ then went on to win the Main Event in convincing fashion.


Earning second and significantly stretching out his points lead, Justin Cooper grabbed the holeshot and looked on his way to the win but a crash and injured rider on the track brought out the red flags for a re-start. Cooper duplicated his incredible start and put his Yamaha up front again on the re-start but lost the lead to his teammate in the early laps. Cooper rode steady and unchallenged in second to stretch his lead in the championship chase to 20 with one round remaining in the division.

Heading into the race, much of the focus was around Cameron McAdoo, whose dramatic crash and courageous ride on Tuesday night had him in intense physical recovery for three days. His final race in Atlanta started out bad; he had a huge crash in qualifying after separating from his bike off the face of a triple jump. He was clearly affected with soreness and pain in his heat race, dropping outside of a transfer position before picking up his pace and reaching seventh place for a spot in the Main Event.

When the gate dropped for the Main Event, Cameron came together with another rider in a low rhythm section and while recovering from that got hit in the back of the head by another rider's rear wheel as he jumped nearly completely over McAdoo. McAdoo remounted but one rider was down on the track, necessitating a full restart for the second time in a 250SX Class Main Event in the past two rounds.

In the re-start, McAdoo jumped out with a sixth place start, but less than three minutes into the 15-minute plus one lap Main Event he ran into the back of teammate Seth Hammaker when Hammaker made a mistake in the whoops. The crash also collected Pierce Brown. That set McAdoo back to eleventh, but his troubles weren't over. Less than five minutes into the race Garrett Marchbanks aggressively rode under McAdoo in a bermed corner and sent both riders down to the ground. Their bikes locked together and McAdoo finally remounted in 17th position. The Kawasaki rider was able to advance four positions to earn a very hard-fought 13th place finish, putting him 22 points down in the title hunt, and dropping him from second to third in the standings.

Another 2021 race winner, Australian Hunter Lawrence, ran into some troubles of his own when he went off the track and over a Tuff Blox, throwing him to the ground on the opening lap. Lawrence got to work climbing back through the pack from 18th place; he salvaged an impressive fourth place finish on the night.

The series next heads to Rice-Eccles Stadium in Salt Lake City for the penultimate 450SX Class event and Round eight of the Eastern Regional 250SX Class on Saturday, April 24th.

Then one week later, at the same venue, the final round of the season to determine three championships with a 450SX race and the 250SX East/West Showdown.