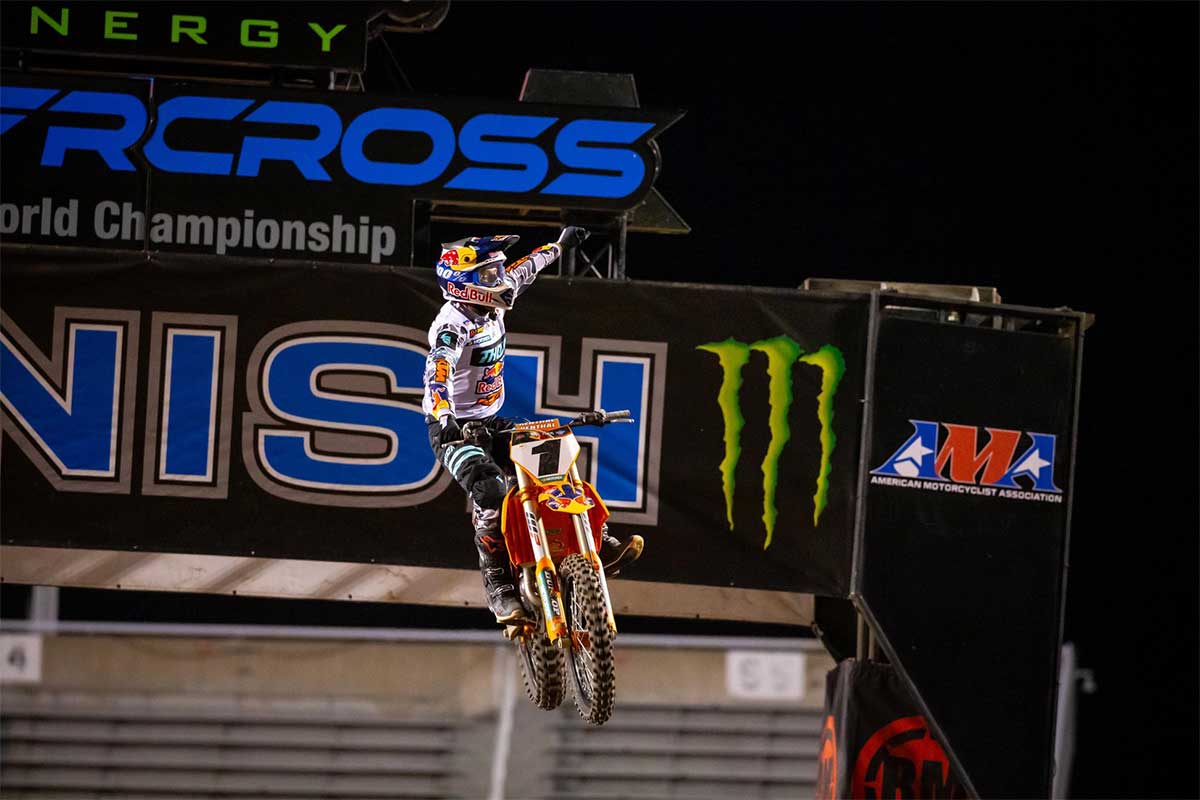 Cooper Webb. Photo: Simon Cudby
Cooper Webb and Shane McElrath have taken the wins in the 450SX and 250SX classes respectively at round twelve of the Monster Energy Supercross season under lights at Rice Eccles Stadium in Utah.

The twenty lap 450SX main got off to a chaotic start when heat two winner Malcolm Stewart crashed with Rockstar Energy Husqvarna Factory Racing's Zach Osborne and Red Bull KTM's Cooper Webb coming out of the malle best. Title contender Ken Roczen and Eli Tomac both suffered and were stuck just inside the top ten and battled each other for a few laps before Roczen, showing speed through the whoops led Tomac for the first half of the race as the duo mounted a charge to the front of the field.


With half the race down Osborne continued to hold the lead over Webb while Jason Anderson was holding down third and keeping Roczen and Tomac at bay. Tomac finally made the move on Roczen setting up a good battle for the second half of the race. Once clear of Roczen Tomac started to hunt down Anderson as Roczen dropped back slightly. It only took Tomac a few laps before he moved into third as the riders around him began to drop lap speed.

Tomac started dropping fastest laps to close in on Webb in second, Webb was also closing in on leader Osborne. With three-quarters of the race done the top three where now all on the same straight boding well for a close finish.

Webb got by Osborne with three minutes remaining, Osborne offered a little bit of resistance to Tomac before the championship leader got by and set out after Webb. Meanwhile, Roczen's strong early speed had faded, and he was stuck down in fifth and going nowhere; and dropping points in the championship chase.

With two laps to go, it looked like Tomac was in with a chance as he sat a tantalising three or four bike lengths away, but Webb didn't make a mistake and notched up another win. Osborne held on for third over Rockstar Energy Husqvarna team-mate Anderson. Roczen finished fifth dropping to fifteen points behind Tomac in the title chase.

‰ÛÏIt was a great night overall but it was a tough race ‰ÛÒ the track conditions were definitely tricky and you had to be patient out there," Webb said. "The whoops were tough, I just committed to my lines from the beginning and it played out pretty well. It was a great night to get a win, these are not easily regained, especially with the top guys up here tonight so I want to soak it in but we‰Ûªve got five more rounds to go.‰Û 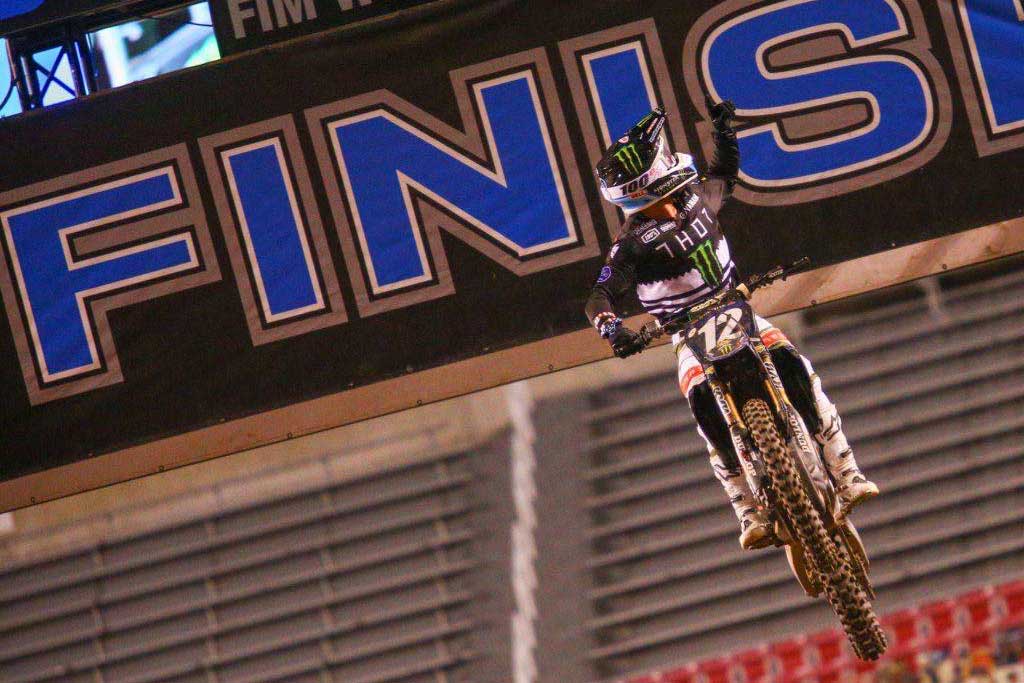 250SX East winner Shane Mclerath.
Star Racing Yamaha's Colt Nichols took the holeshot as the sixth round of the 250SX East Coast main got underway with team-mate and championship challenger McElrath in tow. Championship leader Chase Sexton got off to a less than stellar start in fifth before it all turned sour when he slid out in the opening lap and dropped back to seventeenth.

With a third of the race done Nichols stayed stoic out front holding off Mclerath while Gieco Honda's Jeremy Martin sat a further five seconds adrift in third. Sexton was gaining ground while everyone was still in close contention and with eight minutes remaining had moved into sixth but still fifteen seconds off the the lead.


Mclerath took the lead at the seven-minute mark, and all he had to do from there was to remain on two wheels as he slowly pulled away from Nichols. With five minutes to go, Sexton was still sixteen seconds behind third-placed Martin and not making ground. The last four laps wound down with no change in the positions as McElrath crossed the for his third win of the season to conclude another perfect round with the fastest qualifying time, heat race win and main event win. Colt Nichols made it a Star Racing Yamaha 1-2 with second while Martin and Sexton came home third and fourth respectively.

"We had a tough day, all day round, as this track is pretty tough, but we did a lot of praying and a lot of focusing so it was nice to come out like that. I just wanted to give it my all tonight and whatever happens after that happens, and man it's good," McElrath said from the podium.

Mclerath's win now sees him tied on points with Sexton for the championship lead with three rounds remaining.

"I just washed the front, and that's about it," Sexton said of his costly crash. "I came back from pretty much dead last, that's all I could do, so we are going to have to be better and get ready for Sunday. 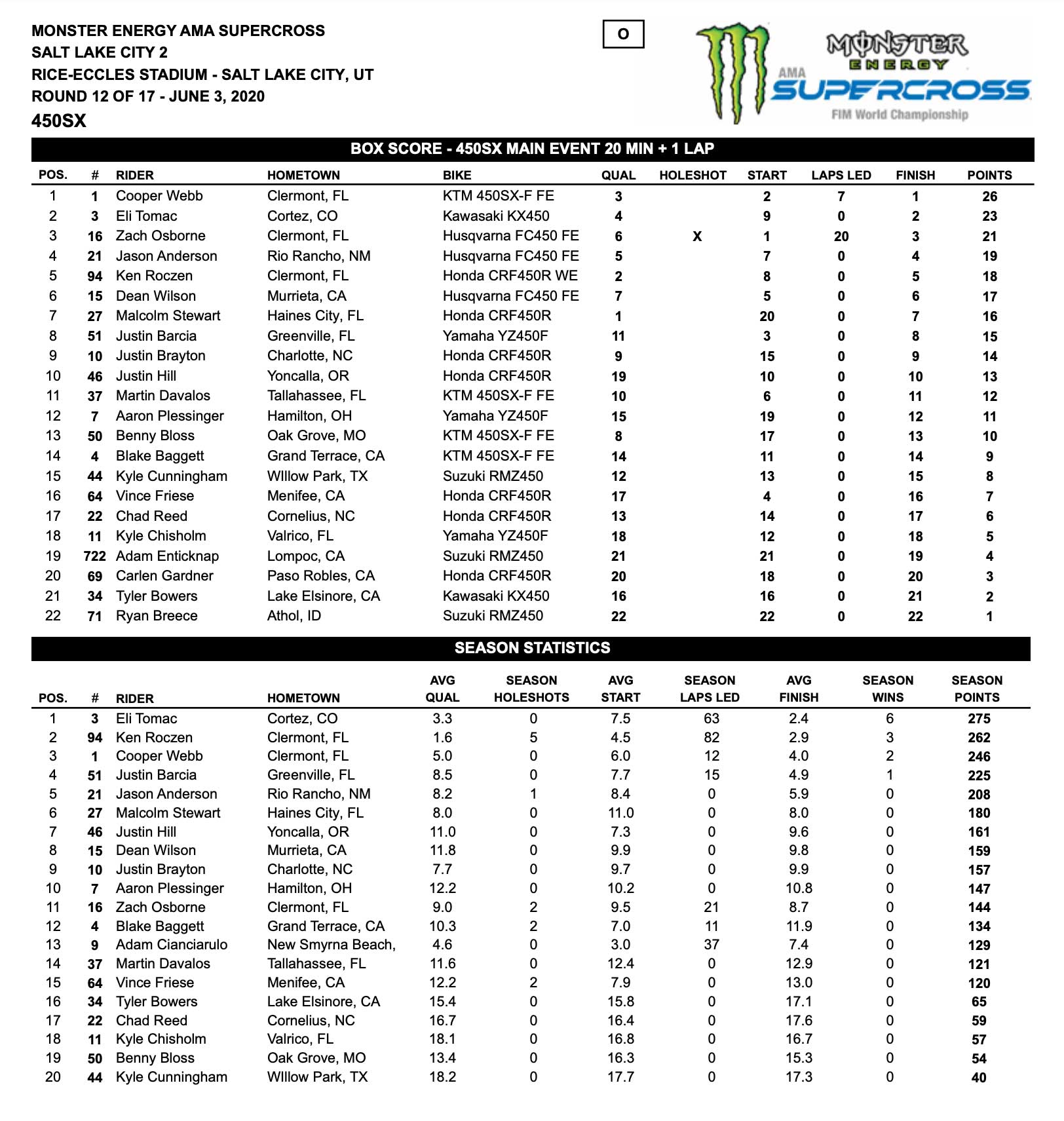 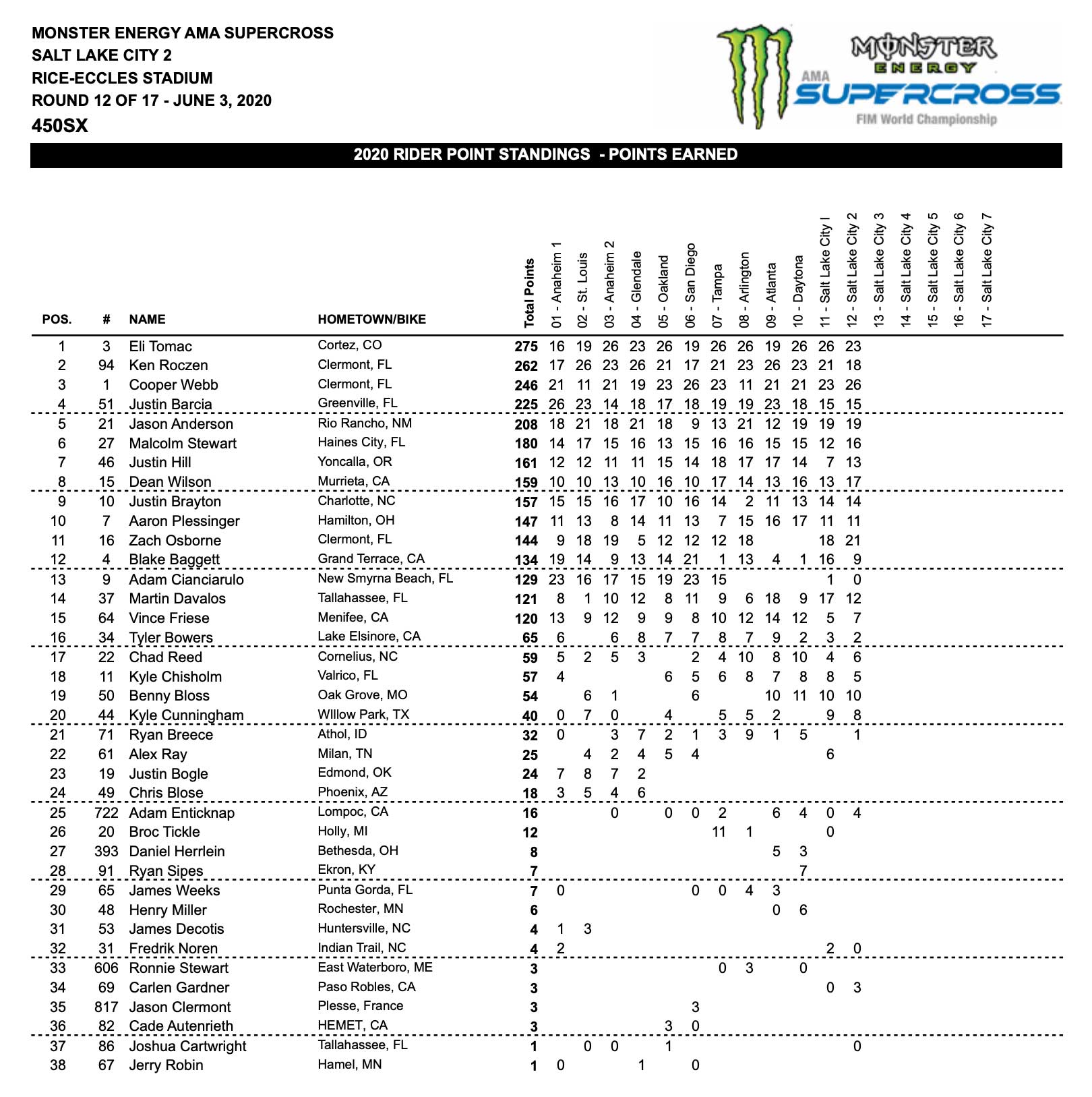 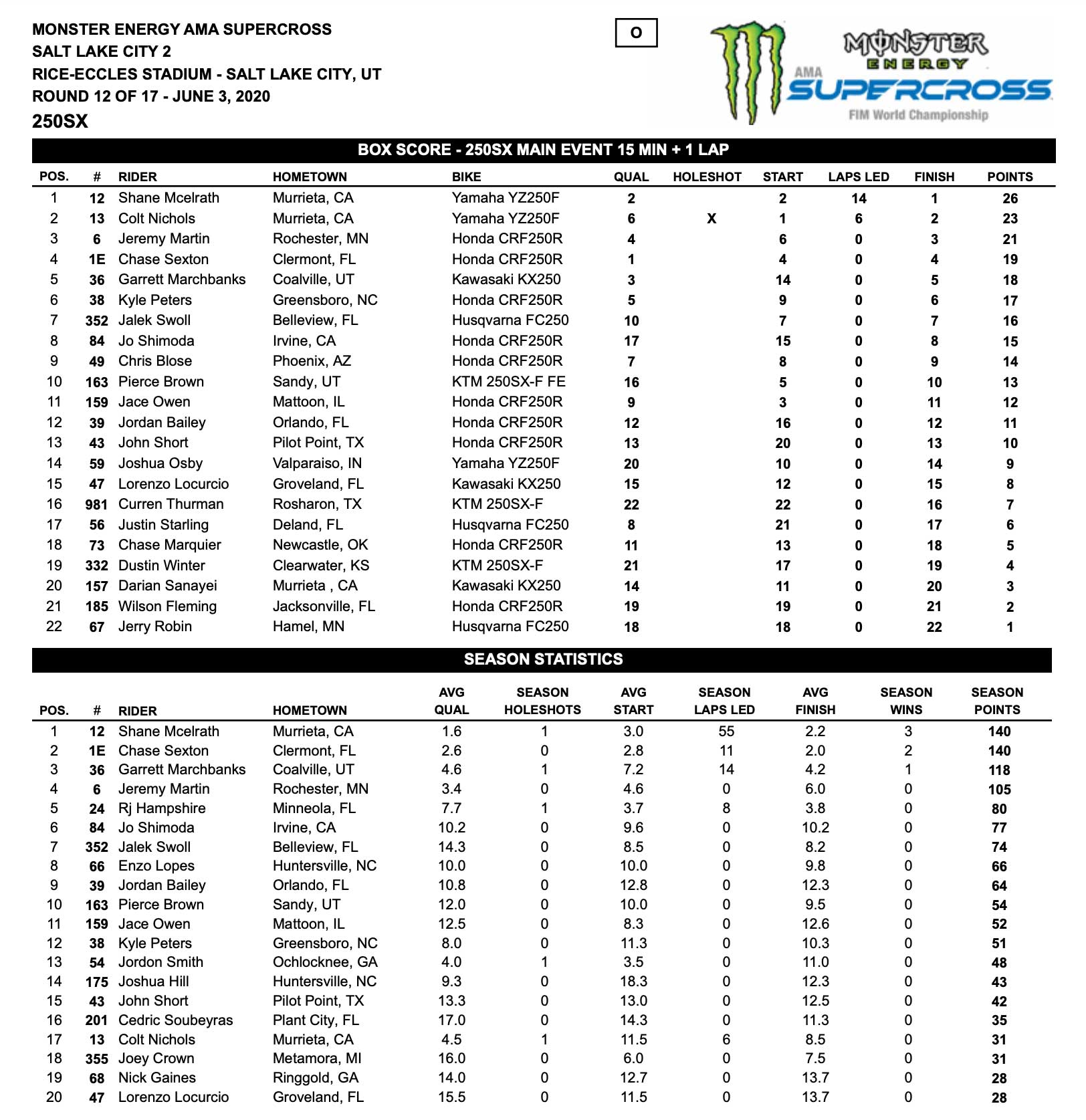 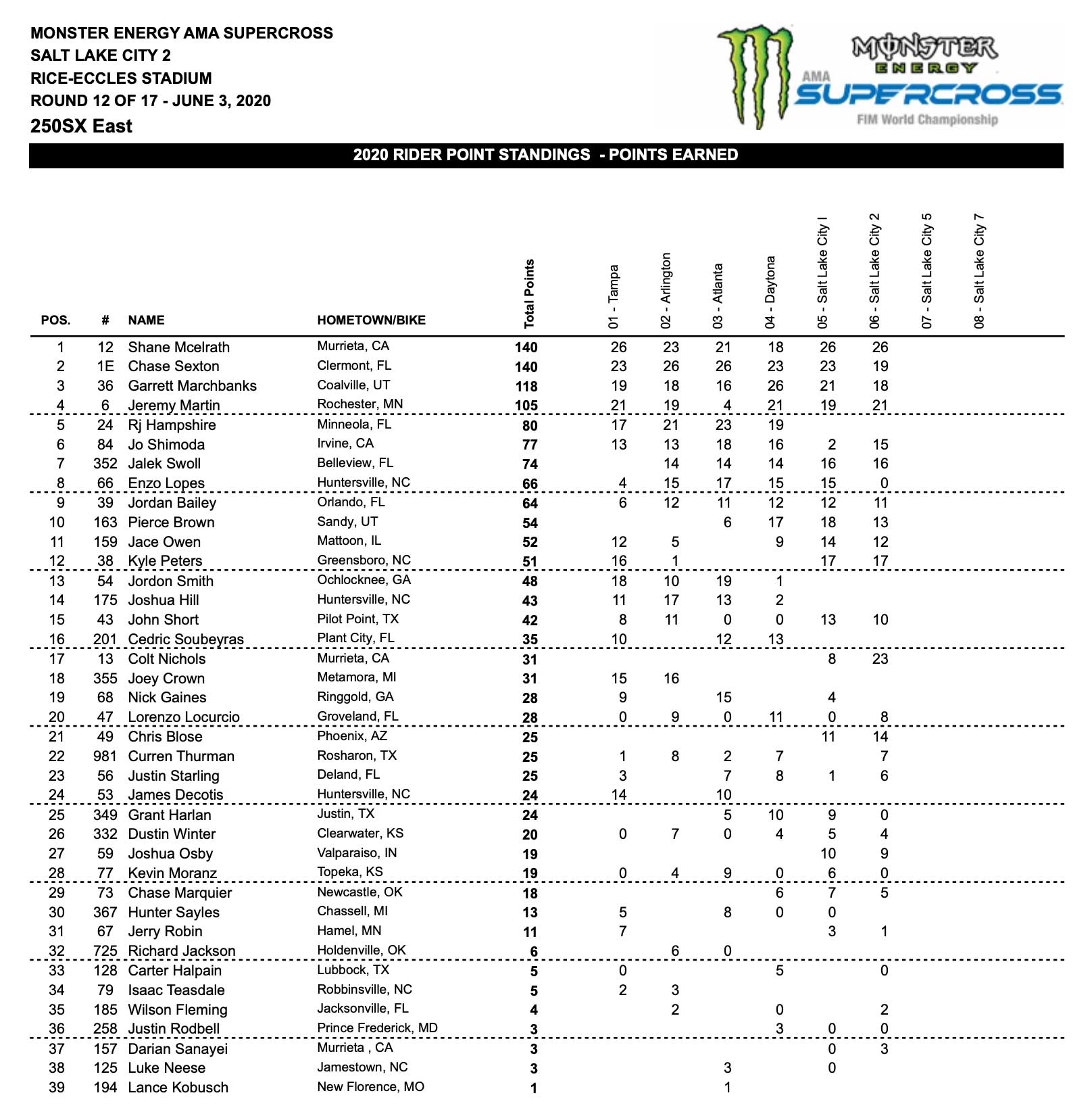