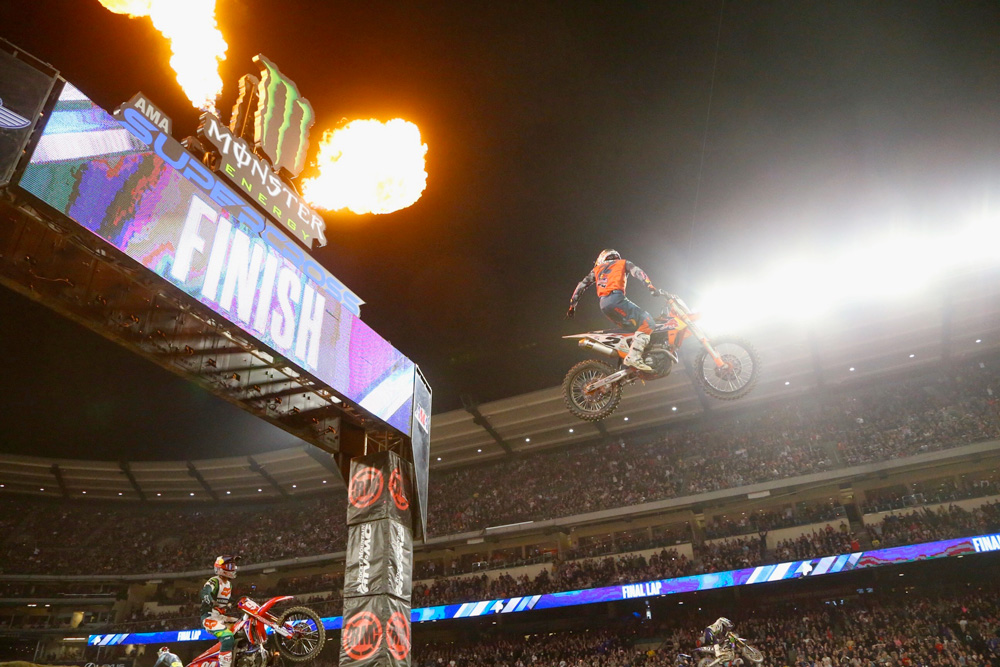 Cooper Webb grabbed his first ever 450SX class win with a pair of wins and a third place to take out the first triple crown of the season. Photo: Feld
Cooper Webb and Shane Mcelrath have both tasted victory in 450SX and 250SX classes respectively at round three of the AMA Monster Energy Supercross Championship at Angel Stadium, Anaheim, CA, for the first of three triple crown format races of the season.

It was a much drier affair for Anaheim 2 after the season opener two weeks ago saw constant rain and mud conditions. For round three, despite a lot of rain in the area through the week, the track was dry and the racing fast and furious as ever.

450SX Main Event 1
Red Bull KTM's Cooper Webb took the win in race one after passing Team Honda HRC's Ken Roczen in a thriller on the final half lap. Roczen had spent thirteen laps of the fourteen completed out front and seemingly in control until Webb closed in on the final lap. Roczen missed a small rhythm section, and Webb was able to fly by two corners before the finish. Roczen tried to counter, but it was Webbs win by a bike length.

Webb's team-mate and fastest qualifier Marvin Musquin was third after passing Monster Energy Kawasaki's Eli Tomac who had run third for most of the race. Team Honda HRC's Cole Seely had a steady race and ran in fifth from start to finish. Defending Champion Jason Anderson had a bad start and rode through the field from tenth to fifth by the chequered flag. Monster Energy Yamaha Racing's Justin Barcia was sixth while round two winner Blake Baggett suffered a bad start and then a DNF after a tough block cover got caught in his rear wheel. Chad Reed was 10th.

450SX Main Event 2
Webb came out blazing once again in race two of the three to be contested with a convincing holeshot ahead of Seely, Musquin, Anderson, Barcia and Roczen.

Webb would complete the fourteen lap journey mostly unchallenged for his second win in a row. Team-mate Musquin did close in on the closing minutes but eventually had to settle for the runner-up spot. Barcia rode a steady race to take the final podium spot. Roczen had held the place for the first two-thirds of the race but crashed in the whoops after his foot came off the pegs. The German was then thrown into a battle for fourth with Tomac and Anderson, Seely had dropped through the field and was now back in seventh. Tomac managed to hold Roczen off for the fourth place while Anderson finished sixth. Reed was a non-starter after experiencing bike problems before the start of the race, problems the Australian was not willing to expand on.

450SX Main Event 3
Going into the final 450SX race Webb had a good advantage having taken wins in both previous races. Unlike the previous two races he did not get the holeshot but tucked right in behind holeshot winner Eli Tomac. Just having to remain in the top three Webb showed little fight after team-mate Musquin got by and settled in for the journey. Tomac would go on to take a comfortable win over Musquin while Webb crossed the line in third after the fourteen laps. His 1-1-3 giving him his first 450SX class overall win. Musquin's second saw him take home second overall while Tomac's win elevated him to third in the overall.

Chad Reed made it back for race three and impressed as he came out of the gate firing settling into fourth place. Roczen was soon on the scene, and the duo waged a lap after lap battle before Rocczen finally got the upper hand and settled into fourth, where he would remain until the flag. Reed had his best finish of the night with fifth.

Defending champions Jason Anderson was a disappointing seventeenth after getting tangled up with other riders while running fourth. Justin Barcia had a heavy off when he got cross-rutted and was ejected from his bike over a big jump. 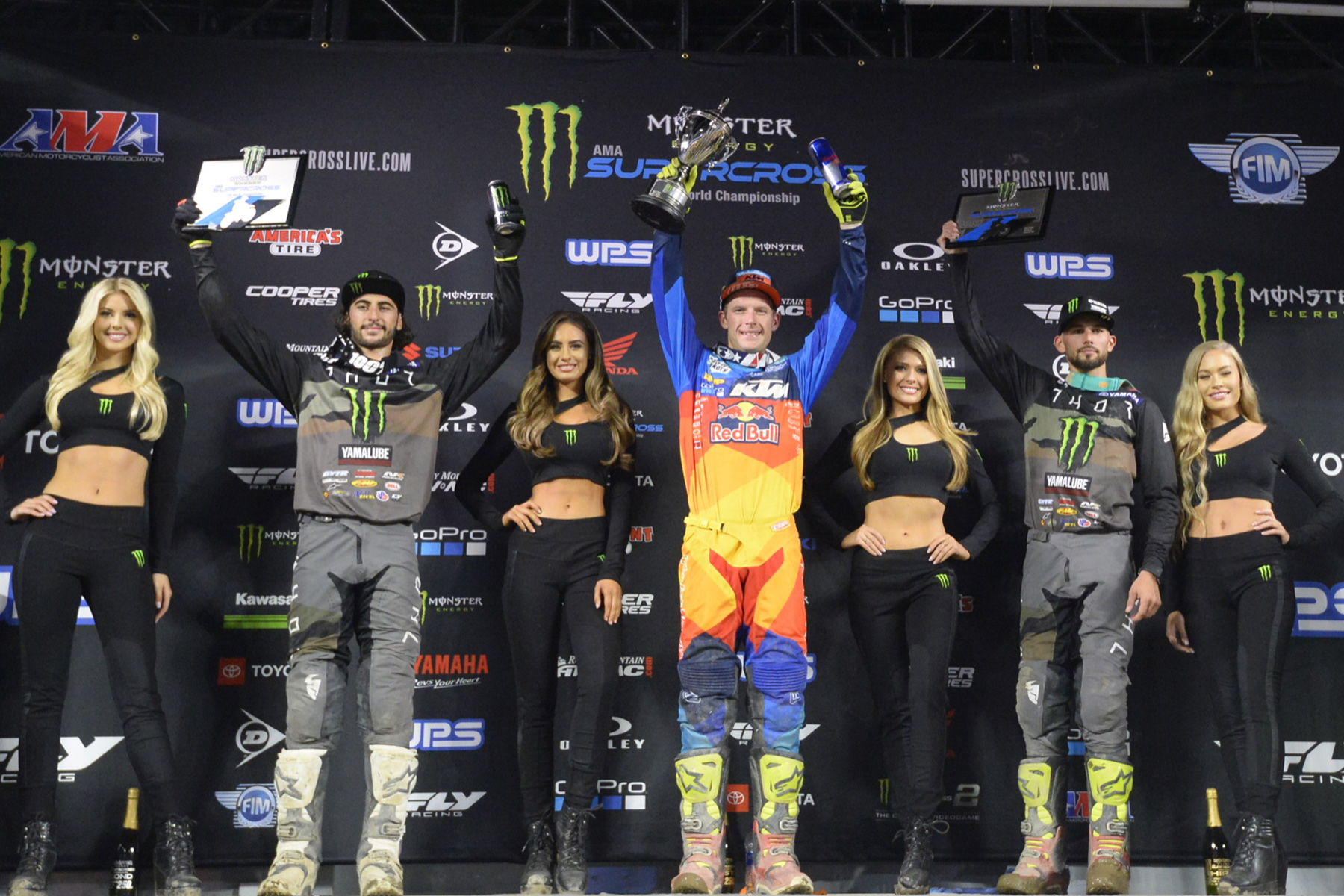 Dylan Ferrandis (L), winner Shane Mcelrath (C) and Colt Nichols on the 250SX Class podium.
250 Main Event 1
Race one of the 250SX West main saw round two winner Adam Cianciarulo get out the perfect start but a front end wash out on the second lap saw him on the ground and re-mounting in fifth. Anaheim 1 winner and championship leader Colt Nichols assumed the lead and from there clicked off lap after lap out front, his only blemish being a small run-in with a tough block. Nichols' team-mate and fastest qualifier Dylan Ferrandis got by Troy Lee Designs Red Bull KTM's Shane Mcelrath early and then completed an unchallenged journey in second to make it a 1-2 finish for the Star Yamaha Team. Mcelrath finished third, holding off Cianciarulo who was trying to minimise the effect of his earlier mistake. Geico Honda's Rj Hampshire got past Yamaha's Jacob Hayes in the closing stages to claim 5th.

250SX West 250 Main Event 2
250SX race two started out were race one left off with Nichols taking control of proceedings with a solid holeshot ahead of team-mate Ferrandis while Mcelrath tucked into third place. Nichols looked in control for the first five minutes, although did have heavy pressure from his team-mate. Nichols then put the first blot in his copybook when he dropped his YZ250F exciting a tight corner and handed the lead to the Frenchman. On the same lap, Nichols also missed a rhythm section and let Mcelrath by. From there that's the way they ran until the end. Hampshire only dropped one spot from his starting position to finish fourth while Cameron Mcadoo came in fifth. It was another bad start for Adam Cianciarulo and then it only got worse as he crashed mid-race and was eventually credited fourteenth

250SX West Main Event 3
It was Sean Cantrell who pulled the holeshot in the final 250SX class race with the luckless Cianciarulo hot on his heels. Overall contender Mcelrath was in close quarters with the duo as Ferrandis, and Nichols tucked in behind, setting up a titanic battle for the overall. Mcelrath was quick to assert his authority and hit the front in the first third of the race. From there he was never headed and with a 3-2-1 result had enough to take the overall win.

Cianciarulo held on for second place which elevated him to fifth overall for the night. Ferrandis put the pressure on Cianciarulo in the closing laps knowing that if he got the position, he would have the overall but he couldn't make it happen. The Frenchman still accumulated enough points for second overall via a 2-1-3 result. Nichols finished the final moto in third which was enough form the championship leader to take third overall on the night and enough points to retain the championship leaders red plate going into round four next week in Oakland, CA.


Australian Tomas Ravenhorst qualified in twenty-first and with the top eighteen going straight through was sent to the LCQ to try and grab one of the final four positions. He finished seventh and had to watch the final.