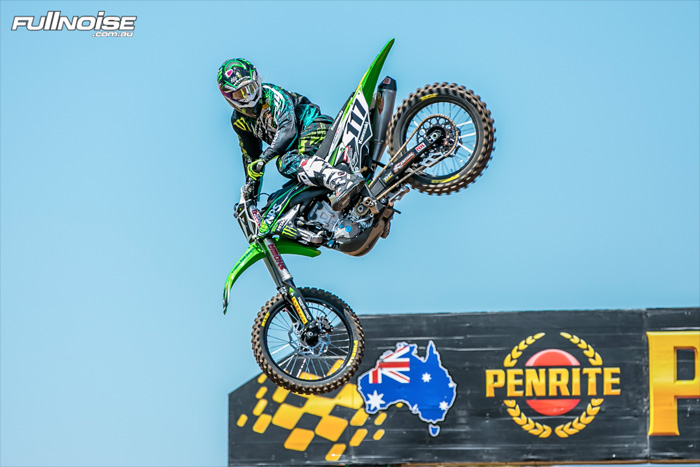 Due to lingering effects from a crash at the third round of the 2015 Australian Supercross Championship held at the Wayville Showgrounds, Dylan Long has announced that he will miss the remaining three rounds of this years championship.

Long had shown great speed at all three rounds of this years championship, though had suffered numerous crashes and mishaps in each main event leaving the talented rider well down in the points chase.

The Victorian looked as though he had broken his string of bad luck at the start of the main event at round three, running in sixth position before he crashed heavily.

While suffering no serious physical injury in his crash at Wayville, Long did hit give his head a good rattle and has announced via his facebook page today that lingering injuries have him at less than 100% and he will turn his focus on getting completely healthy and build towards a new program in 2016

"Due to the crash I had at Wayville I will not be racing the rest of the Supercross this year, it sucks but I'm not 100% yet and there's no point racing supercross when your not 100%, can only end up in more injury!" Long posted today. "

"Unfortunately that means I don't get to ride underneath the Kawasaki Australia MX Racing Team truck again! I can't thank Troy Carroll, Michael Marty & the rest of the team enough for all there help and the awesome opportunity!

"Now onto a new stage for next year," Long added.

"Thanks to everyone who supported me this year it's amazing to have people like you behind me but will be back next year fitter and stronger!"

While there is no official word on where Long will end up in 2016, there has been heavy speculation during the past couple of weeks that he will join a new look in house Honda Australia team alongside 2015 Australian MX Nationals MX2 Champion Jay Wilson.

Top Image: Dylan Long has announced that he will miss the remainder of the 2015 Australian Supercross Championship