Wayne Maxwell undefeated at Round 3 of the ASBK 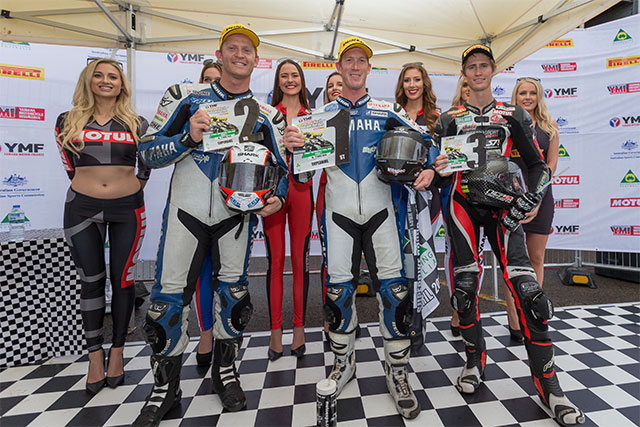 There was no denying the power of the Yamaha Racing Teams‰Ûª Wayne Maxwell at Round 3 of the 2016 Yamaha Motor Finance Australian Superbike Championship presented by Motul Pirelli, starting from pole position and taking both race wins at Sydney Motorsport Park today.

After a brief warm up this morning it was straight into racing with 12 laps to get the job done in race one for the Yamaha Motorcycle Insurance Superbike class.

As fans gathered in the stands, all eyes were on the Yamaha R1, as Maxwell kicked the race into gear when the lights went off, launching out in front, leading the first corner.

Maxwell remained in the race lead as they came around to mark the first lap of the 12-lap sprint. Allerton had inserted himself into second position, Yamaha Racing Team‰Ûªs Cru Halliday was right behind in third position eager to remain there for race distance, and see the ASBK podium rain blue.

At the half way point it was Maxwell leading with Allerton and Jones sticking just behind. In rapid succession there was change to the standing as they continued around the technical track.

As the last lap board was shown, it was a race to the finish with Maxwell still out in front. Whilst Falzon making use of the little time remaining passed Walters who was now another position down in eighth, leading into the final corners.

But as the chequered flag flew it was Maxwell who held back the fighting Allerton, finishing just behind in second.

Jones happily taking third place in front of fourth placed Halliday. The Honda pair taking fifth and sixth with Falzon just behind in seventh. Walters, Blaire and Elliott rounding out the top ten in their respective places for race one.

The forecast for rain came true as the rider‰Ûªs were greeted with a wet track for their second attempt in the final race.

Troy Herfoss got an unbelievable start off the line as the lights went out in the second and final race. Maxwell, Allerton, Stauffer, Falzon, Jones, Simon Galloway, Matt Walters, Ben Burke and Blaire rounded out the top ten in succession following Herfoss into turn one.

However, Herfoss was unable to hold back the unstoppable fighting power of the Yamaha mounted 'Wayne Train' moving into the race lead, Allerton following his team-mates move shortly after, relegating the Herfoss back to third all before the conclusion of the first lap.

However a change in events saw Falzon high-side on turn three, the Yamaha rider picking up the bike and managing to re-joined the track attempting to finish the remainder of the race.

With all the action happening on track by the half way point, the order saw Maxwell leading followed by Allerton, Jones and Herfoss. An outstanding performance from Galloway on his Yamaha R1 saw him in fifth, while Stauffer, Adam Senior, Walters and Michael Blaire rounded out the top ten.

Maxwell showed his experience and talent out on track today developing almost a seven second gap on his second placed team-mate Allerton as they lead into the second half of the race. With the pack battling it was clear the fight wasn‰Ûªt over as the top ten saw dramatic changes in the final stages of the race.

Herfoss not quite on the pace and running wide on lap nine dropped him down to eighth place and by lap 10 Stauffer pushed his machine to the limit determined not to let his injuries hold him back taking Galloway‰Ûªs fourth position.

However it was the outstanding performance by Brayden Elliott the 2015 Supersport Champion that caught spectator‰Ûªs attention. After being relegated to thirteenth position in the early stages of the race, he clawed his was up the grid into eighth position.

With the last lap board out it was a mad dash to the finish line as competitors could see the end in site and the championship points up for grabs.

When the final flag flew for the Superbike competitors it was Maxwell who took the blistering win on his Yamaha machine. Unable to tame the front-runner, it was Allerton and Jones who finishing in second and third respectively.

The final top positions saw Stauffer in fourth, with Walters in fifth. Elliott gained two positions to finish in sixth place, just in front of Herfoss in seventh. Senior, Galloway and Paul Dutton rounded out the top ten in what was a thrilling race from Australia‰Ûªs best Superbike competitors.

The elated Maxwell stood on the podium taking not only the two race wins, but the overall round victory at Round 3 of the 2016 Yamaha Motor Finance Australian Superbike Championship presented by Motul Pirelli.

‰ÛÏI am happy with the result today and for the way I have been riding this weekend. The team performed extremely well and for Yamaha to have number one and two on the podium is pretty impressive,‰Û