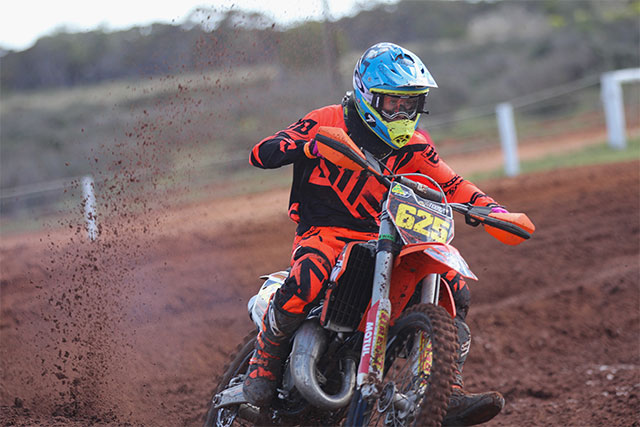 As well as all of the heat race action due to the huge rider numbers at this year‰Ûªs KTM Australian Junior Motocross Championships, selected classes headed in to their second finals races this afternoon, with three competitors finishing the day with victories.

Zachary Watson, Bailey Malkiewicz, Tahlia O‰ÛªHare and Tanesha Harnett were unstoppable in their respectively classes this afternoon, adding more points to their growing tally which could see them crowned Australian Champions by Friday this week.

The older 65cc class were forced to contend with a drying dusty track when they headed out for their second final today, and once again it was Zachary Watson who found his way in to the lead position followed by Ryan Alexanderson and Deegan Mancinelli.

With seven minutes to fun in their second final, Watson stretched out his lead to more than four seconds, while Alexanderson and Mancinelli continued to look comfortable in second and third positions.

Despite a late charge from Angus Riordan in fourth place, there was no change to positions for the rest of the moto. The win in the second 65cc 11 years‰Ûª final was taken by Watson, followed by Alexanderson and Mancinelli in second and third positions. Riordan and Liam Atkinson both finished in fourth and fifth places respectively.

The second final for the 85cc/150cc 14-U16 years class got started with a bang today, and by the time the field had headed into the first turn, there were riders down and fighting to make up positions, but Bailey Malkiewicz and Tyler Darby had no problems at all, and after the opening lap were going head to head for the lead position.

But Malkiewicz was once again the fastest rider on track, and after pulling an additional few seconds on his competitors, left the battles for positions to happen behind him.

After six minutes on track, riders began to spread out, with Darby keeping third placed John Bova at bay, while Michael Murphy and Connor Whitney were back in fourth and fifth positions.

And from there, the top three positions remained unchanged ‰ÛÒ Malkiewicz securing the second final victory from Darby who wrapped up the race in second, while Bova finished in third. Murphy crossed the finish line fourth, followed by Joshua Zorbas in fifth.

The ladies of this year‰Ûªs KTM AJMX hit the track for their second final this afternoon, and once again it was Tanesha Harnett who got to an early race lead where she stayed for the entire moto.

Despite not starting in the lead position, Tahlia O‰ÛªHare managed to make the pass on Madison Healey to move up to second position where she also remained for the duration of the race, while Healey finished her second final in third position.

Ebony Harris and Layla Norton both wrapped up their second final on the treacherous Riverland circuit in fourth and fifth places respectively.

When the second final for the 100-150cc/128-250cc 12-U16 Years Female class kicked off late this afternoon, the ladies continued to follow the trend for the day, and hung it all out there in order to edge closer to a championship.

This time though it was Tahlia O‰ÛªHare who shot off the start and in to the race lead, followed by her biggest competition Tanesha Harnett.

But with ten minutes on the clock in the final race of the day, O‰ÛªHare stretched out her lead to an impressive 11 seconds, while Harnett continued in second position ahead of Emilee McPherson in third.

And it was in those positions that the ladies finished, O‰ÛªHare taking the final race win of the day, from Harnett in second, while McPherson crossed the line in third. Layla Norton and Tahlia Drew concluded their second 100-150cc/128-250cc 12-U16 Years Female class final in fourth and fifth places respectively.