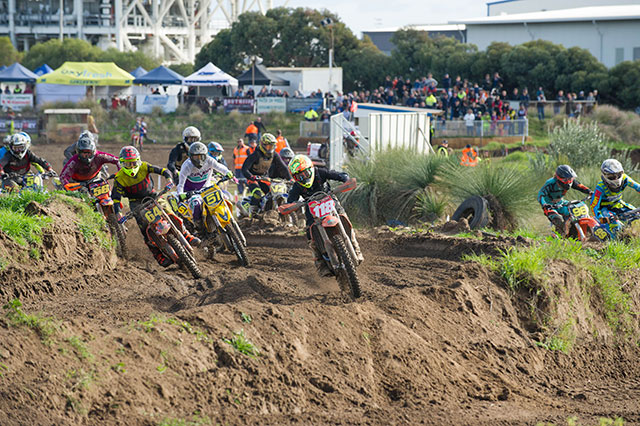 It was a rough day for Round 3 of the Make Smoking History WAMX Junior State Championships fought out across the classes with over 170 riders ripping up sands of Coastal Park Henderson on Sunday July 3rd.

This round also featured the return of the Nippers and for the first time this season the Junior Girls State Championship class joined round three. Cold conditions and rain earlier in the day would trouble many riders with visibility issues, until the day cleared and the track would be as brutal as it is renowned for.

Nipper Class
A terrific group of youngsters hit the track with Jett Harvey, Sophie Martin, Deegan Fort, Sol Pellicano, Charlie Butler, Benjamin McShane, Ryley Fiford, Marco Pizza, Evyn Adams, Max Harvey and Ava Stewart all battling through the rain conditions earlier in the day and a track that roughed up as the day went on.

50cc Auto
Kayden Minear put together three moto wins to secure not just the overall round win but jump to the top of the series standings for the first time this season. Patrick Butler who had held the red plate in the opening two rounds struggled in the sand conditions to finish fifth for the day. Seth Shackleton picked up second overall after a countback with Jake Rumens both locked in a tie in points, with Rumens able to secure the third step on the podium. With the next round ready to line up on the next hard packed surface there is sure to be a surge in the points with Sonny Pellicano, Indy Radcliffe, Charlie Weightman, Chantz Napier, Ryder Matthews-Taylor and Jack Bakker keen to do well at the next round. 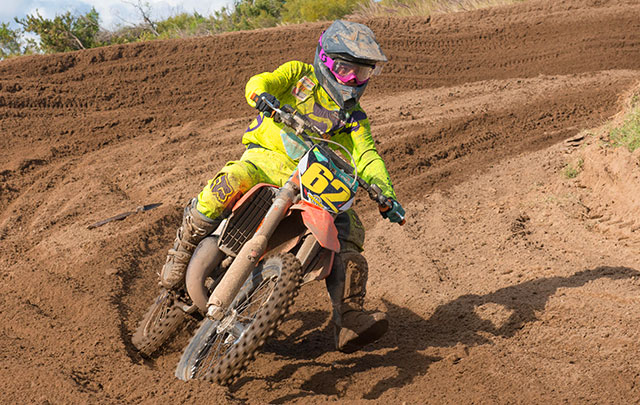 Mitch Outram went (1-1-2) for the win in the 100cc-125cc 15 Years class. Photo: True Spirit Photos/Gordon Pettigrew
65cc 7-10 Years
Kayden Minear (1-2-1) took the round win and maintains the red plate as the series leader. Seth Shackleton finished second with Deacon Paice picking up third for the day at Coastal Park. Seth Clark, Taj Moore, Tate Paganini, Cohen Guyatt and Max Devery were solid finishers throughout the day and the points challenges have tightened in the series standings within the top three.

65cc 10-12 Years
He took the round win and maintains the series lead, and was outstanding, KTM mounted Myles Gilmore kept out the persistent challenges with two moto wins from rival Liam Atkinson who picked up the second moto win and finished second for the day. Mechanical issues hampered Brock Flynn‰Ûªs points charge to record two DNF‰Ûªs, and put a dent in his points tally. Jake Turner finished on the third step of the podium, with Tylar Soloman, and Harrison Tapper separated by only one point at the days end. 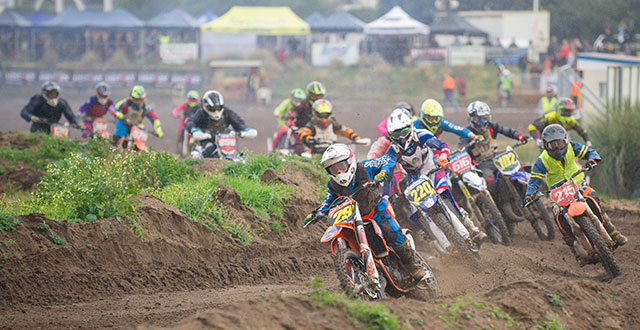 Brady Gilmore took the holeshot in the 85/150cc 12-16 Years but ultimately finished behind Corben Weinert on the day. Credit: True Spirit Photos/Gordon Pettigrew
Girls 85cc/150cc BW/100-125cc 2st/200-250cc 4st
Tahlia O‰ÛªHare came in as the defending champion and secured the perfect round results (1-1-1) to stand atop the podium. Both Tiarna Hansen and Kara Cats would finish on equal points before a countback had Hansen second for the day with Cats securing third for the round.

85/150cc 9-12 Years
Liam Atkinson took the round win (2-1-1) ahead of Myles Gilmore (1-2-3) and Brock Flynn securing third overall. Kaj Radcliffe, Jake Turner, Bailey Smith, Dylan Walsh and Camball McMahon were consistently inside the top ten across the day. Myles Gilmore holds a 15 point lead heading into the next round, and this class has continued to deliver outstanding results across the board.


85/150cc 12-16 Years Consistency is definitely the key to solid results, and Corben Weinert took the round win with the winning formula at Coastal Park. Brady Gilmore finished one point behind in second with Rhys Burnett taking the remaining place on the podium in third. Conan Forrester fresh back from the USA finished in fourth ahead of Seth Manuel. Sam Stephen, Revon Nieuwouldt and Evan Browne continue to feature prominently and look toward the favoured hard packed surface at the next round. 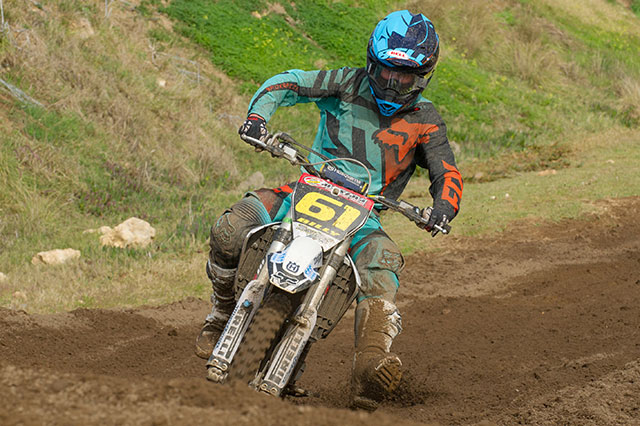 Billy Middleton took the round win (1-1-1) in the 128cc-150cc/250cc 13-16 Years. Credit: True Spirit Photos/Gordon Pettigrew
100cc-125cc 13-15 Years
Two solid race results had Regan Duffy secure the round win (3-1-1) with Corben Weinert joining him on the step with second and one point ahead of Brady Gilmore who finished third overall. A first moto DNF damaged the overall results for Mat Fabry despite finishing the last two motos in second, Fabry would finish 9th overall for the day. Jacob Daniels, Jai Gimenez, Revonn Nieuwouldt, Evan Brown, Micheal Riches and Tahlia O‰ÛªHare were left to fight out inside the top ten, as Corben Weinert now carries the series lead into the next round by only five points from Reagan Duffy.

100cc-125cc 15 Years
Mitch Outram continues to hold the red plate after the round win (1-1-2) and holds a 20 point lead from Billy Middleton (2-2-1) who finished second for the day with Kurt Oinn securing third after a solid round at Coastal Park. Sam Baxter, Austin Ridley and Riley Stephens again pulling solid results and with the points chase closing in within the top five in the standings, every point gained could well be the championship winning point by season end.

128cc-150cc/250cc 13-16 Years
Billy Middleton took the round win (1-1-1) and closed the gap on series leader Mat Fabry who picked up second by one point from third placed Regan Duffy. Kurt Oinn, Riley Stephens, Kai Stephen, Kyal Gillespie and Ryan Copley were solid finishers at Coastal Park, and with three more rounds remaining the 35 points for a race win will be highly prized.

WA Champions, Australian Champions and World Champions- the WAMX series has continued to build the foundations for our junior riders to seize their opportunities. Full class results available on www.mylaps.com