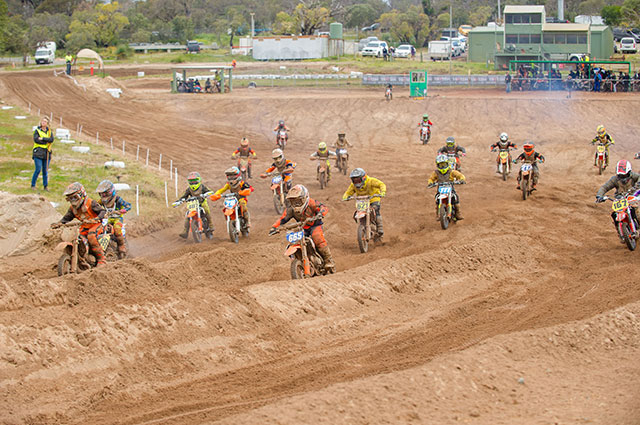 Round 5 of the Make Smoking History WAMX Junior State Championships greeted riders with rain, wind and cooler conditions at Wanneroo Junior Motocross Club with the penultimate round providing plenty of thrills, spills and a shake- up in the points heading into next month‰Ûªs final round.

Quads Limited 7-11Years Brooke Hollins took a clean sweep of the round (1-1-1) with series leader Nichole Mc Donnell (2-2-2) picking up second place and Kiera-Lily Buckley the third step of the podium. Mea Dowsett and Bridie Pearse would battle for the remaining places, and with one round remaining, the championship is still open for the taking next month at Byford with only 13 points separating the top two places in the series standings.

Quads Competition 8-12 Years Series leader Josh McQuade took the round win from Keenan Murphy and Azmin Pearse, who would join them on the podium for third. Deegan Lough was in contention for a podium finish before a mechanical failure in the last moto ended his day and damaged his championship point‰Ûªs chase. Amira Schmid, Harrison Hayes, Zara Porter, Josh Squires and Brooke Hollins would secure points heading into the final round at Byford next month, ensuring an exciting finish to the Junior Quad Championship.

Quads Blasters 12-16 Years Jae Dowsett was unstoppable taking the round win (1-1-1) from Jacob Bosustow second and third placed Andrew Soltoggio. Caelen Campione and Flynn Burton would battle further back with Zac O‰ÛªDonnell unable to line up for racing. Dowsett retains the series lead heading into the final round from Bosustow and Campione.

50cc Auto Series leader Kayden Minear not only secured the round win with a faultless display but further extended his lead in the series by 51 points. Seth Shackleton would finish second with Patrick Butler holding down third for the day and securing second place in the season standings. Third place in the series leader board is Jake Rumens who worked hard for a top five finish across the day as Ricky Skalecki, Jack Bakker and Connor Wiese would feature in the top ten with Tyson Silvestro Sonny Pellicano and Jai Love.

65cc 10-12 Years Liam Atkinson (1-1-2) took the overall round win from Myles Gilmore and Atkinson now has the series lead by a mere 3 points from second placed Gilmore, as Brock Flynn wrapped up third for the day. Tylar Soloman, Harrison Tapper, Jake Turner, Seann Arrowsmith, Isaac Atkins, Finley Maton and Jye Tomerini recorded solid results across the day. The Atkinson and Gilmore showdown will come to its cracking conclusion on the hardpacked surface at Byford, a fitting final to an outstanding race series between these two fierce competitors.

85/150cc 9-12 Years As with the 65‰Ûªs, Liam Atkinson and Myles Gilmore continued their epic battle with Atkinson picking up the round win with Gilmore second and Brock Flynn third for the day. Kaj Radcliffe, Riley Wager, and Jordan Minear would endure the battles just outside the top three, as the momentum was all with Atkinson and Gilmore. Myles Gilmore now holds a 9 point lead in the series from Atkinson, and you can be guaranteed of another three outstanding races come next month at Byford for the series final. 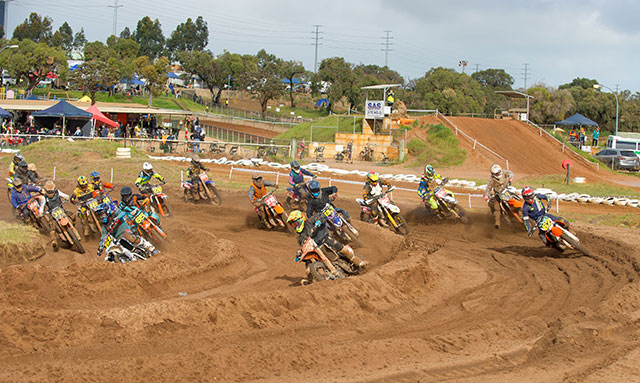 128cc-150cc/250cc 13-16 Years Terrific trio Middleton, Duffy and Outram
85/150cc 12-16 Years Hot favourites Brady Gilmore went down in the opening moto ending his day and possibly his season, and Corben Weinert was out with injury, and firm favourite Seth Manuel sat this round out. This opened up opportunities for other contenders and Conan Forrester was in super form securing the round win (2-1-2) from Christian Silvestro second and Tyler Mitchell third overall. Sam Stephen, Revonn Nieuwoudt, Kallum Jackman and Liam Darbyshire were to duke it out as did Rhys Burnett who was contention for a podium result before a DNF in moto one destroyed his chances, although Burnett would bounce back with a second place in moto two and final moto win, the opening moto results was see him miss the podium. The final round at Byford will be one not to miss with Conan Forrester now taking over as the series leader by 26 points from Rhys Burnett.

100cc-125cc 13-15 Years It was a clean sweep of the round for Regan Duffy who now carries a 54 point lead heading into the final round of the championship. With Corben Weinert and Brady Gilmore absent through injury, this allowed Jacob Daniels to secure second overall and move into second in the series behind Duffy. Christian Silvestro put in three solid motos to pick up third for the day ahead of Revonn Nieuwoudt and Tahlia O‰ÛªHare.

100cc-125cc 15 Years Billy Middleton took the round win (2-1-1) from second placed Mitch Outram, and Kurt Oinn third for the day. Austin Ridley and Sam Baxter were in great form, and Outram‰Ûªs results for today have him holding the series lead by 16 points from the hard charging Middleton. An exciting finish will conclude the year next month at Byford.

128cc-150cc/250cc 13-16 Years Regan Duffy secured the overall in the Junior Lites with a clean sweep (1-1-1) as Billy Middleton would pick up second overall and Mitchell Outram third for the day. Kai Stephen and Nick Williamson would remain consistent through the day for the top five, and Duffy tightened up the points charge with the gap between series leader Billy Middleton and Duffy now 50 points. Kurt Oinn, Tahlia O‰ÛªHare, Nathan Rodgers, Liam Ford and Joe Di Guilio were left to slog it out picking up valuable points heading into the next exciting and final round at Byford on September 17th.

Whilst various classes look to be locked up and decided, it is never over until the final flag fall and with a mixed bag of results at the penultimate round, the final round will go down to the wire. Round 6 is a massive double header of juniors and seniors on September 17th and 18th, the Lightweight Motorcycle Club will be the destination for Western Australia‰Ûªs top motocross riders all vying for championship glory.