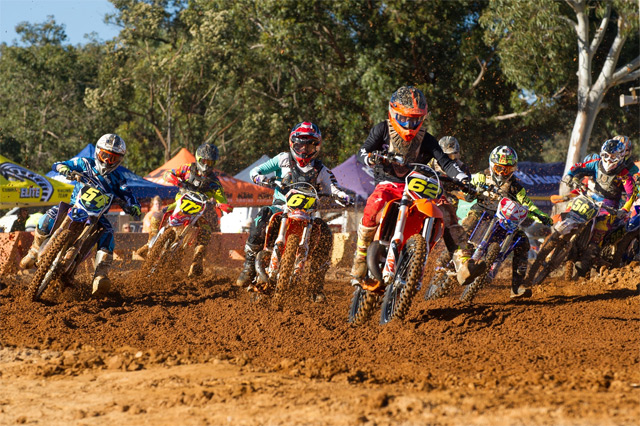 The season came to its exciting conclusion for the final Make Smoking History WAMX Junior State Championship held at the home of the Wanneroo Junior Motocross Club last Sunday.

With plenty of rain leading up to the event, a heavy track soon sorted out the riders with a track famous for its toughness, plus some massive ruts, braking and acceleration bumps thrown in for good measure, the expected rains held off, to bring to a close, a brilliant state championship season.

Kayden Minear came into the round as the series leader and sealed the state championship and the overall round win with his (2-1-1) scorecard. Seth Clark (1-5-2) picked up second for the day and also second in the championship. Deacon Paice finished off the day‰Ûªs podium with third. Jake Rumens secured third in the championships.

85/150cc 9-12 years Cody Chittick secured the top step of the podium by only two points from Liam Atkinson in second and Seth Manuel picking up third. It was one of the most tightly contested classes for the points and the same was said for the championships when Atkinson secured the championship from Chittick in second and Seth Manuel securing third place.

85/150ccc 12-16 Years Regan Duffy took the round win (1-1-1) from Mitch Outram (3-3-2) and Corben Weinert picked up the remaining step for third. Outram‰Ûªs result securing the championship from Duffy and Jacob Daniels third for the season.

100/125cc 13-15 years Caleb Grothues returned to racing after a lengthy recovery from a horrific hand injury sustained whilst competing overseas earlier this year. In the first moto Grothues crashed out whilst in early contention and Mat Fabry did similar with both riders fighting their way back through the pack.

In the older age group, 100/125 cc 15 Years, Justin Hart continued his domination with the round win from Tom West in second and Ryder Smith grabbing third place for the day. Jonathon Hartley was in contention before crashing into the fence in the final moto and fighting back to 7th position, and out of the points hunt for the podium.

Justin Hart secured the championship from Jonathon Hartley in second and Dale Doutch holding on by 1 point to grab third for the season.

The 128-150cc/250cc Defending champion Justin Hart (2-1-1) took the round win but not before being challenged by Caleb Grothues who took the opening moto and picked up fourth before a massive crash challenging for the lead in the opening lap of the last moto which had him record a DNF. Mat Fabry secured the second step of the podium from Jonathon Hartley third for the day. Kurt Oinn and Jake Woods were in strong form, and no-one was able to tame Justin Hart, who took the round win and took out the championship. Mat Fabry took out second in the championship with Jonathon Hartley picking up third for the year.

The winners will be celebrated and crowned at the 2015 WAMX Junior Presentations which will take place on Saturday November 14th at Peel Thunder Football Club, with tickets available on-line at www.wamx.com.au

Full series results can be found at www.mylaps.com