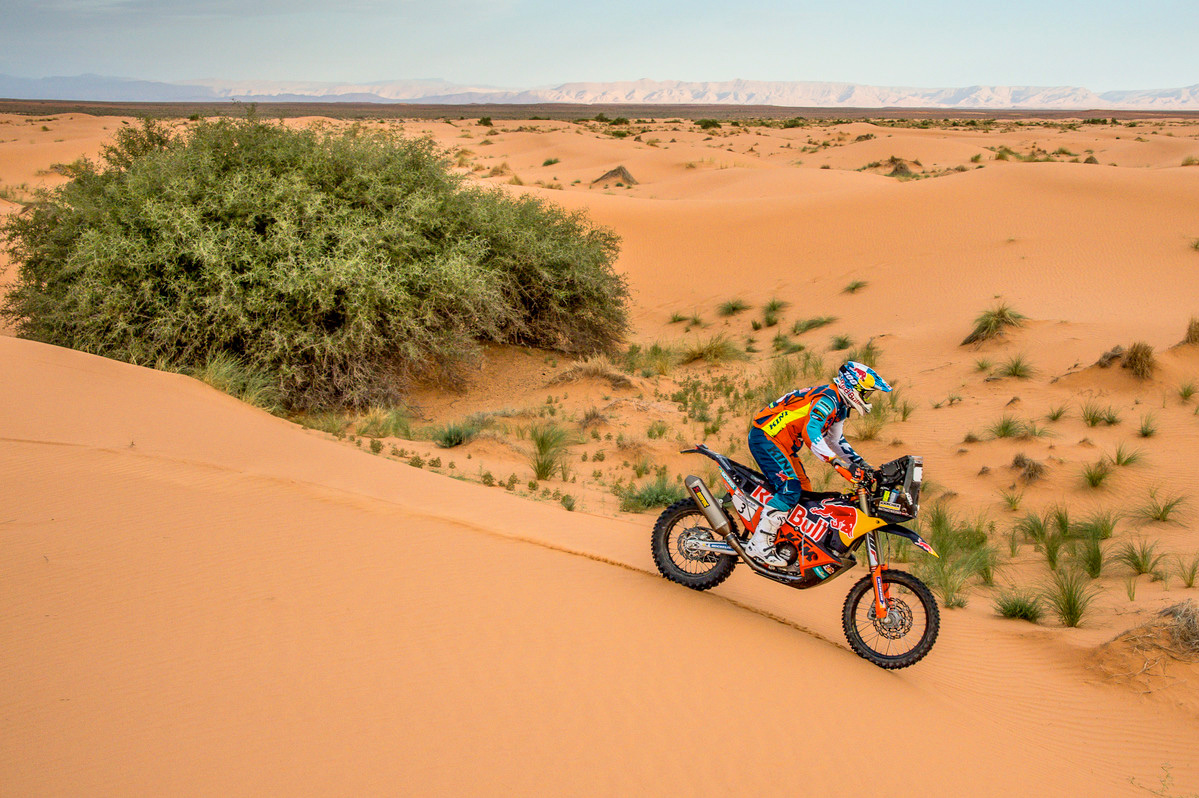 Following the long first stage of the rally, Stage Two gave riders a slightly easier time on their machines with a short liaison leading into a 281-kilometre timed special. The terrain was just as unforgiving however with washed-out pistes and hard-pack, rocky tracks making up the majority of the stage.

Runner-up on Stage One, Matthias Walkner was the second rider to enter the timed special on day two ‰ÛÒ three minutes behind Price.

Using his experience, speed and navigation, the reigning Dakar champion closed in on the leading rider throughout the stage. Ultimately arriving at the final checkpoint just over 20 seconds behind his teammate was enough for the Austrian to claim the win by two minutes and 46 seconds. Walkner, who lies second in the provisional overall standings just 12 seconds down on Price, now has the task of opening Sunday‰Ûªs marathon stage.

‰ÛÏThat was a good stage today, navigation was very challenging," Walkner said. "I had Toby in front of me, but that made riding quite tricky because of the dust, so I was still forced to rely on my road book. A lot of the pistes are still hard to follow due to them being washed out by the rain, but I managed to complete the whole stage without making too many mistakes. We tried out some new tyres today which have performed well on the rough terrain of Morocco, so it‰Ûªs good to know we can race hard on them and they will last for 290 kilometres. I am really happy with my riding and the bike is working well, we‰Ûªll see how things go leading the stage tomorrow.‰Û 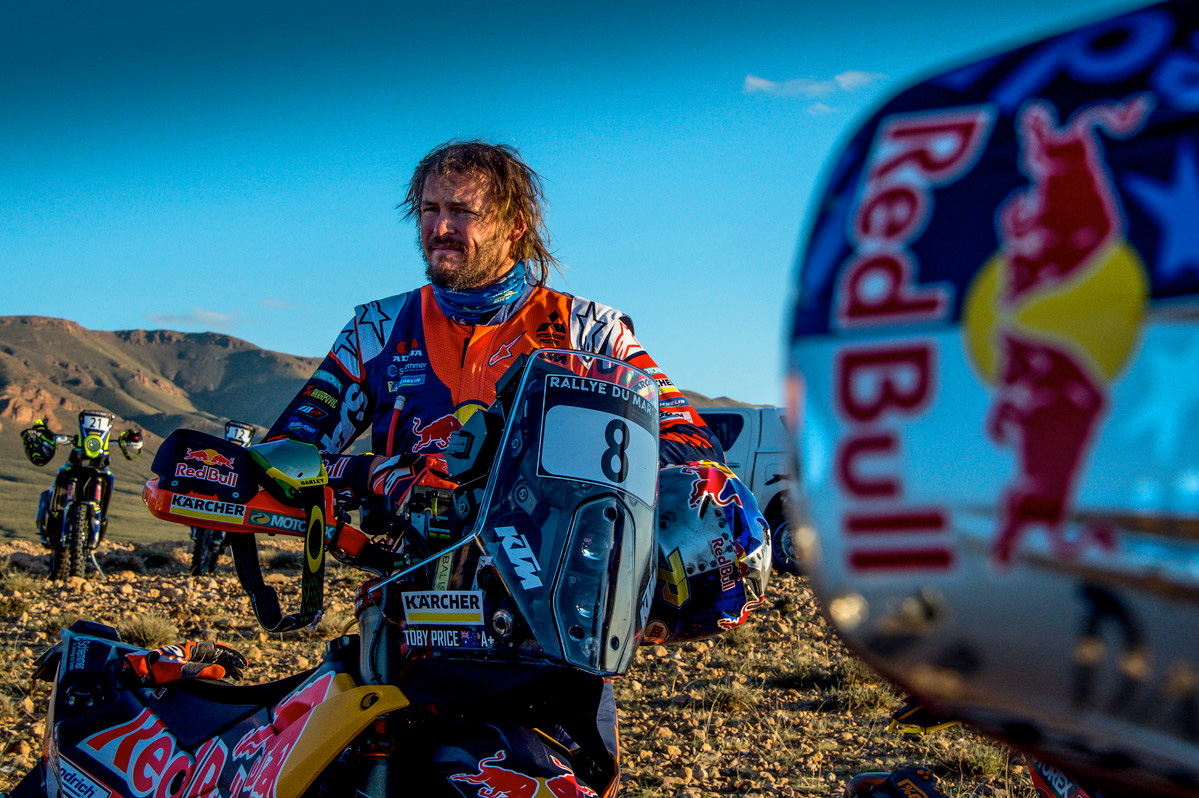 Despite finishing second on stage two, Australian Toby Price still holds the overall lead heading into Stage three. Photo: RallyZone - Edoardo Bauer
Despite being chased down by stage-winner Walkner, Toby Price was able to keep himself ahead over the entire day. Navigating Stage Two well and making the minimum of errors, Price‰Ûªs second place enables him to retain his lead in the provisional overall standings with three days left to race.

‰ÛÏStage two has gone really well ‰ÛÒ I set off first and I finished first on the road so that‰Ûªs encouraging," Price said. "Leading the full 281-kilometre stage was tough but I think I managed to do a good job with just a couple of small mistakes. I lost a little time finding my way again and I think that‰Ûªs where Matthias was able to make up the three minutes, but overall I am really happy with the day. The new tyres from Michelin held up really well today so on to day three.‰Û 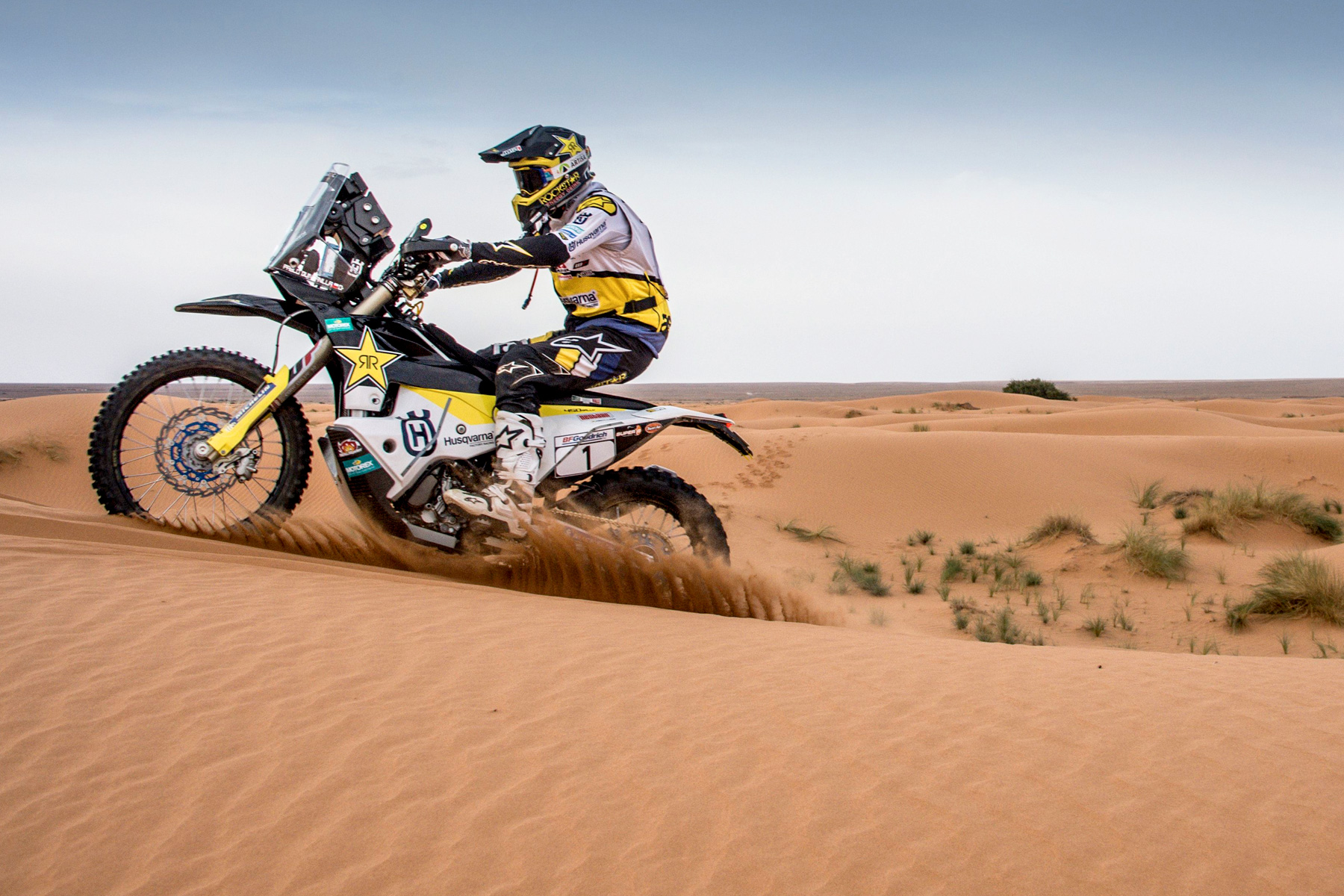 Pablo Quintanilla made up ground on stage two finishing third and moved up to 6th in the overall. Photo: RallyZone - Edoardo Bauer
Making good use of his advantageous starting position, Pablo Quintanilla powered to a strong third place.

Returning stronger after a challenging opening stage, Quintanilla enjoyed a mistake-free stage two. With Saturday‰Ûªs timed special featuring tricky navigation, the Chilean rally star tackled everything that was thrown at him to climb back inside the top-10 in the rally‰Ûªs provisional overall standings to conclude the day sixth overall.

‰ÛÏThe special stage today had really tricky navigation but I pushed hard to make up some of the time I lost yesterday," Quintanilla said. "Today there were many off-piste sections and again at some parts it was difficult to locate the correct routes. Overall, I am happy with how I did today. My pace was good, I passed a lot of riders and ended up finishing the stage with the third best time for the day. It felt good to be back at my normal race pace. We got one more tricky stage out of the way and now I‰Ûªm focused on the last three stages of this rally.‰Û 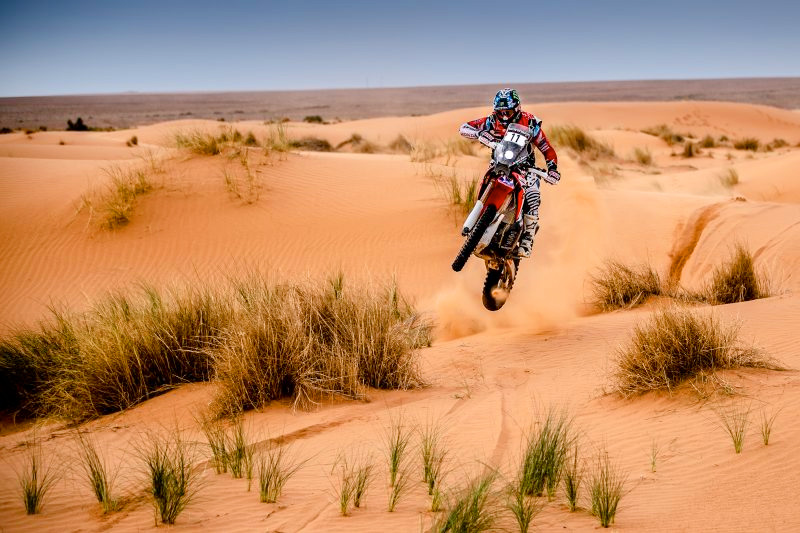 Brabec started the day very strongly, displaying a ferocious pace in a type of terrain that he clearly feels at home with. Brabec led practically the entire day until he reached a control point which proved difficult to locate and validate.

"Today was fast and rocky ‰ÛÒ more my style of riding," Brabec said. "I‰Ûªm comfortable doing it. I was riding really well. Unfortunately, some 35km from the end I came across Paulo and Sam and I thought something tricky was happening. In the end we lost a bit of time there finding our own route to the waypoint. That‰Ûªs the way it is. You lose a couple of minutes. Unfortunately, that‰Ûªs rally ‰ÛÒ it‰Ûªs not easy to find your way across Africa, not least of all with a paper map. I‰Ûªm happy to finish the day and we‰Ûªll push tomorrow. Hopefully by the end we‰Ûªll have a couple of Hondas up around the podium area."

Yamalube Yamaha Official Rally Team rider Franco Caimi had his best stage with fifth place and ending the day with a time of 03:31:14 to move into the same position in the overall standings, with a 21 minute deficit to leader Toby Price.

Sam Sunderland was the big loser on todays stage. The Brit started third after a good opening day but damaged his rear tyre during the rocky stage, which subsequently lead to an issue with his mousse. Although he was able to make it home in 21st place and will aim to regain some time on Sunday‰Ûªs Stage Three

‰ÛÏToday was a little frustrating, especially after riding such a strong stage yesterday," Sunderland lamented. "Things were going well and I was feeling really good, but around kilometre 220 I hit a big rock with my wheel, which lead to damage to my mousse. I carried on ok but with the mousse damaged it started to break up and it was like running on a flat tyre. I nursed the bike home but obviously lost a lot of time. We still have three days left, so I‰Ûªll continue to do my best and get some more kilometres on the bike to prepare for Dakar.‰Û 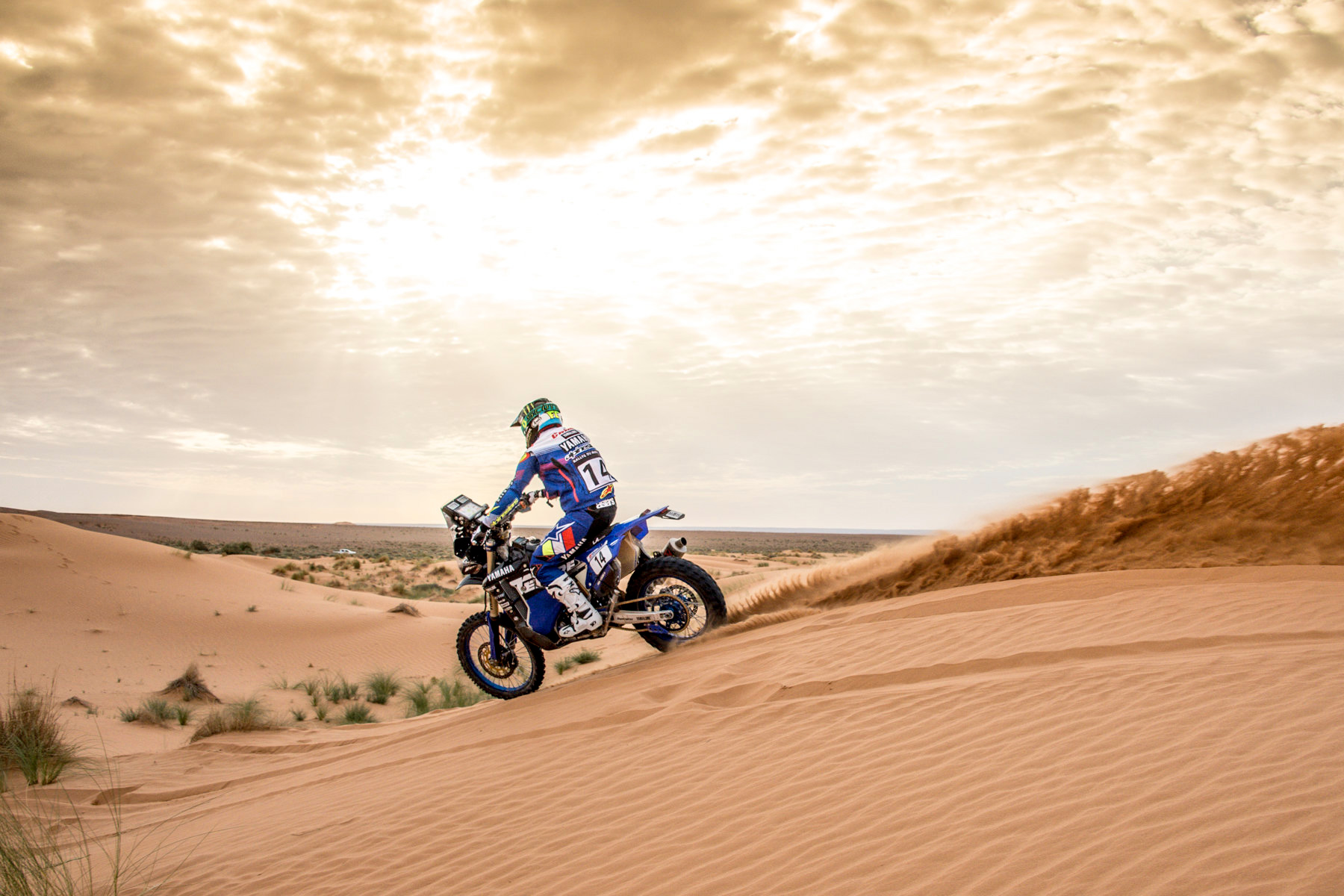 Yamalube Yamaha Official Rally Team rider Franco Caimi had his best stage with 5th and now sits 5th overall. Photo: Photo: RallyZone - Edoardo Bauer
Sunday‰Ûªs Stage Three of the Rally du Maroc, the first of the marathon stages, will see riders complete a 280-kilometre route, the finish of which will be at a temporary bivouac in the desert. The riders will receive no outside assistance from their teams at the end of the day‰Ûªs riding. The stage includes a 275-kilometre timed special. 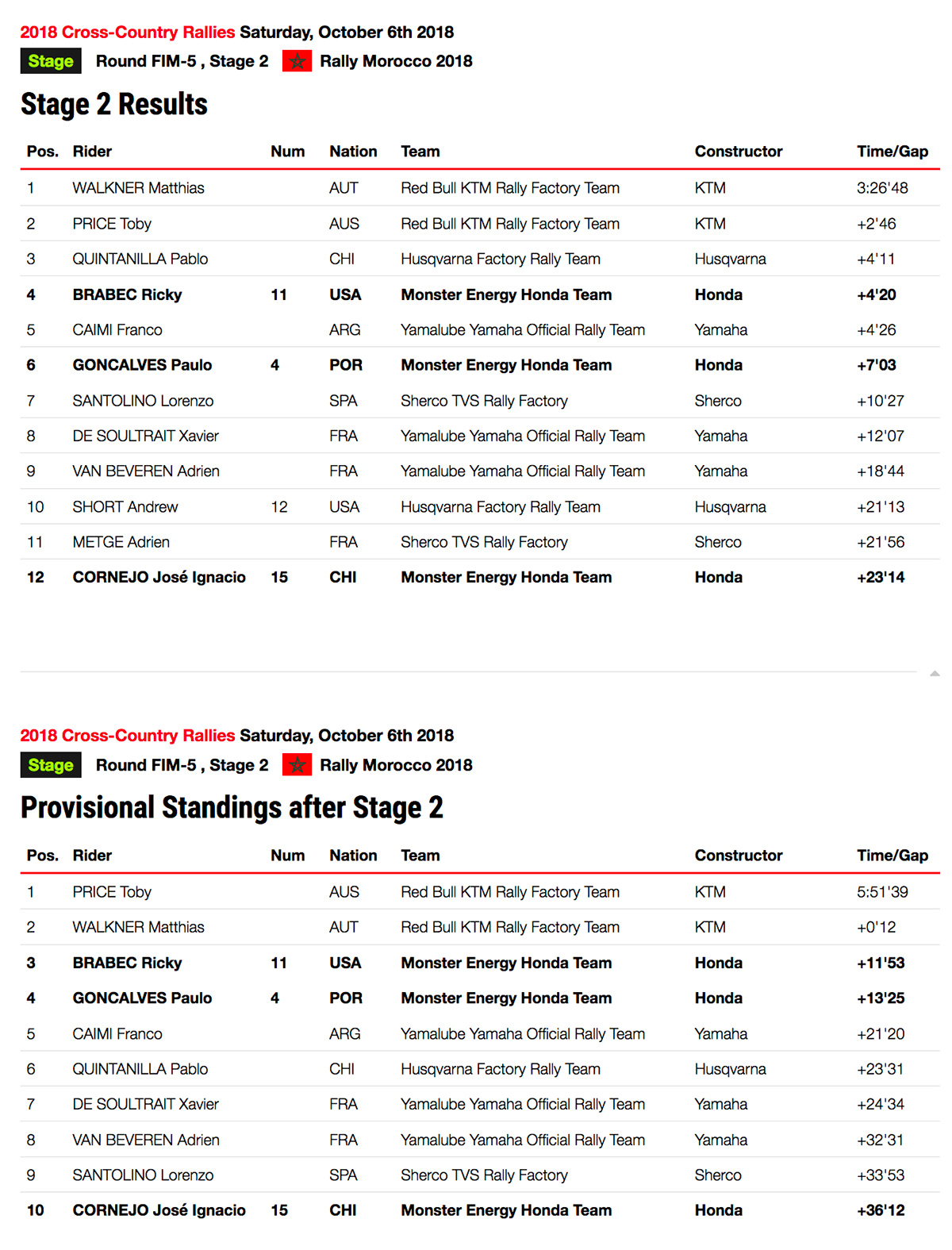