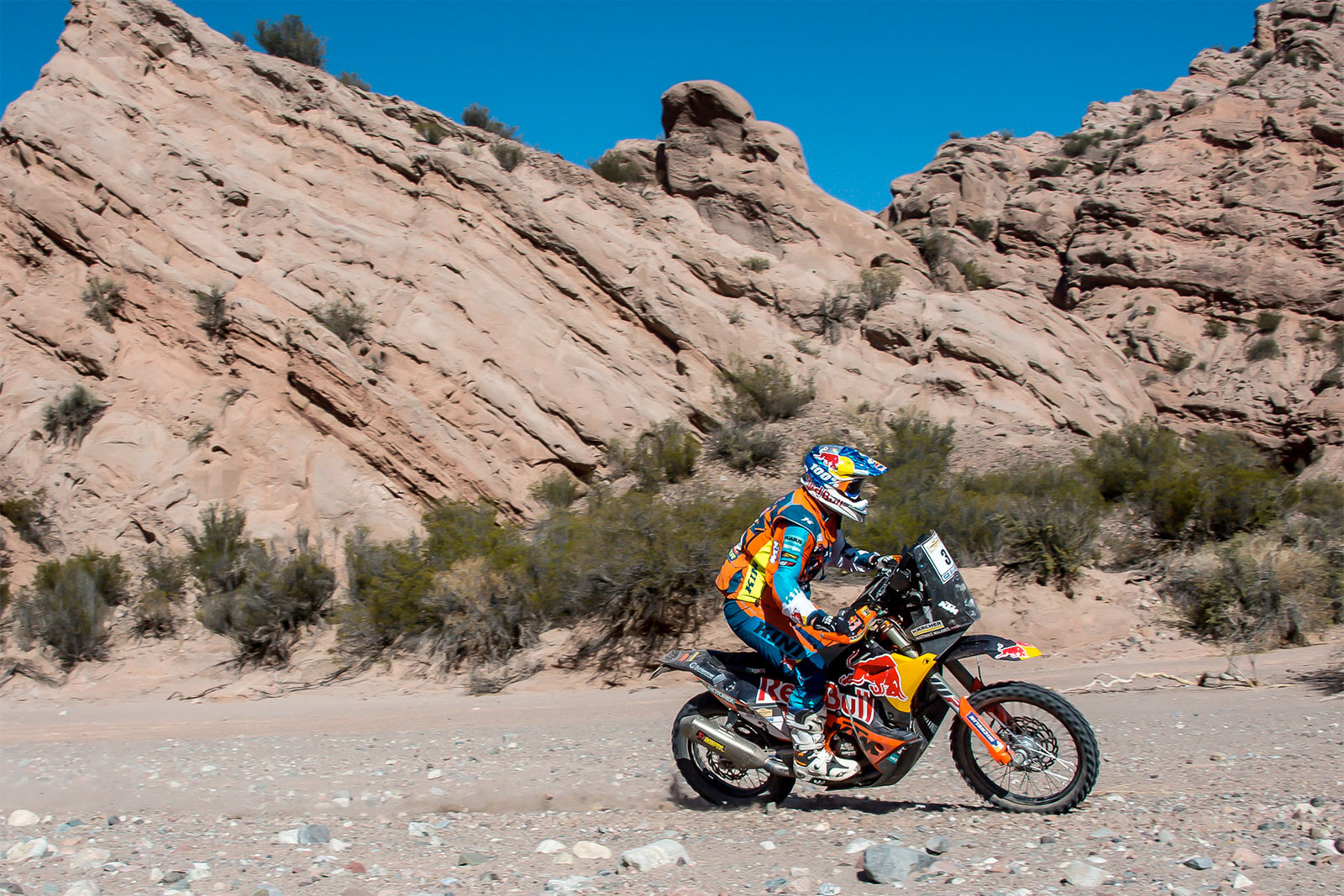 The result moves the duo up to second and third in the provisional overall standings, with Price 3:28 behind leader Paulo Goncalves, going into Friday‰Ûªs final stage.

Day four of the Desafio Ruta 40 posed one of the greatest physical challenges of the rally so far. Containing the event‰Ûªs longest timed special at 357.55km, the stage took competitors south from Tinogasta to the city of Villa Union at the foothills of the Andes. The route itself climbed to over 4,000m above sea level as riders tackled a variety of terrain, from river beds and washes strewn with large rocks to fast, open pistes on the drop down to the finish.

After a small issue on the previous day‰Ûªs stage, Matthias Walkner set off seventh at the start of this morning‰Ûªs timed special. Initially riding with the aim of catching the riders in front, he was soon faced with the treacherous terrain of the first 200km. Maintaining a steady pace, the Austrian concentrated on his navigation and the task of getting to the finish safely. Putting his experience to good use, Matthias ultimately posted the days fastest time, elevating himself to third overall in the provisional standings.

‰ÛÏToday‰Ûªs stage was good and bad in equal measures. The first half of the stage was really tough ‰ÛÒ the terrain was so tricky and the rocks so big," Walkner explained. "It really took it out of you, especially so early in the stage when the bikes are fully fuelled. I decided to stick to a safe pace and make sure I didn‰Ûªt get lost or have an accident. It seems to have paid off because I was fastest today and managed to get a little time back that I lost yesterday. We‰Ûªve got one more day to go, so I‰Ûªm looking forward to getting to the finish and hopefully with a good result.‰Û 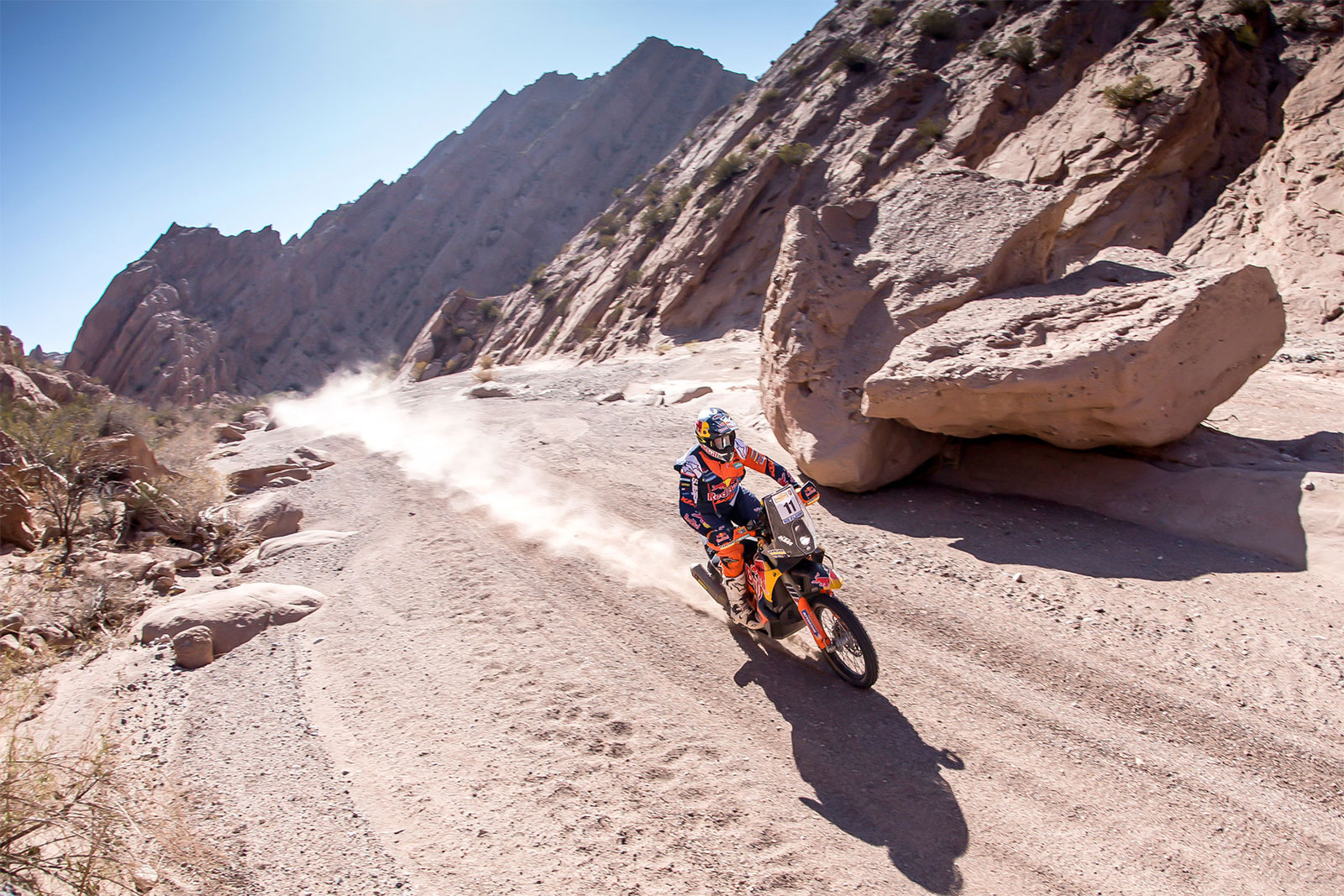 Australian Toby Price was a strong second on stage and remains in the hunt for the win with one stage remaining. Photo: RallyZone - Edoardo Bauer.
Toby Price put in a superb performance on the day‰Ûªs technical stage. Similarly to team-mate Walkner, Price opted for consistency on the tough technical section of the stage before pushing on the latter half and ultimately clawing back valuable time on the riders in front. Second fastest on the day, Toby will be aiming to secure his podium position on tomorrow‰Ûªs final stage.

‰ÛÏIt wasn‰Ûªt a bad stage today. I perhaps took things a little too steady at first, the guys in front were setting a good pace and I didn‰Ûªt want to risk pushing too much and make a mistake," Price said. "After CP2 I was able to push a little harder ‰ÛÒ I made up some time on the others and everything felt good. The encouraging thing is I was able to keep to a nice strong pace throughout the stage and that is always the goal.‰Û 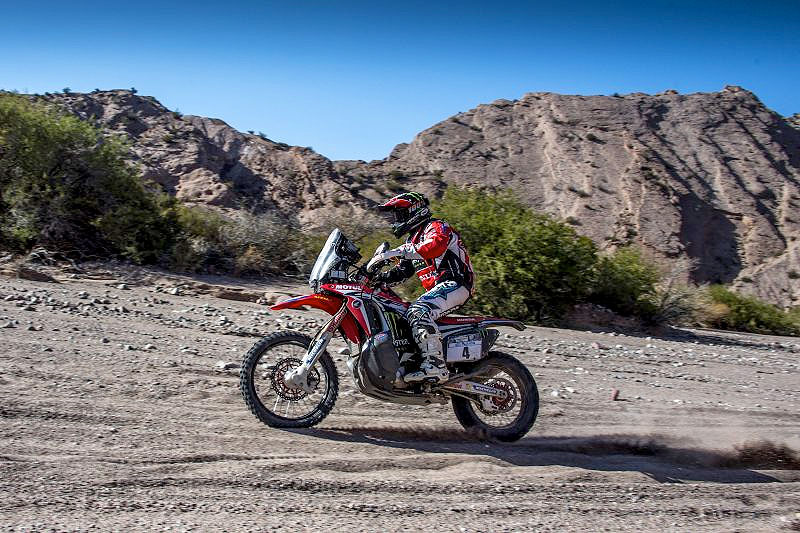 Honda's Paulo GonÌ¤alves is in the box seat with third on stage and the overall lead heading into tomorrow's 447-kilometre finals stage. Photo: RallyZone - Edoardo Bauer.
In spite of the hindrance of having to open the field Paulo GonÌ¤alves was able to maintain a swift pace high in the mountains linking Tinogasta and Villa UniÌ_n and finish third fastest. In doing so the Monster Energy Honda Team rider was able to keep the aspirations of his pursuing rivals firmly in check and maintain the overall lead.

"Today we had a very long stage, 360 kilometres with a lot of rivers, loads of rocks and some fast track too. I started first and I tried to keep a good pace and not miss anything while navigating," the Portuguese rider said. "I think I've done pretty well because I didn‰Ûªt drop much time, so I‰Ûªm happy about that. We have the most important day still ahead, especially given today‰Ûªs result. I will try and not make any mistakes and will be focused from the start of the special until the final flag." 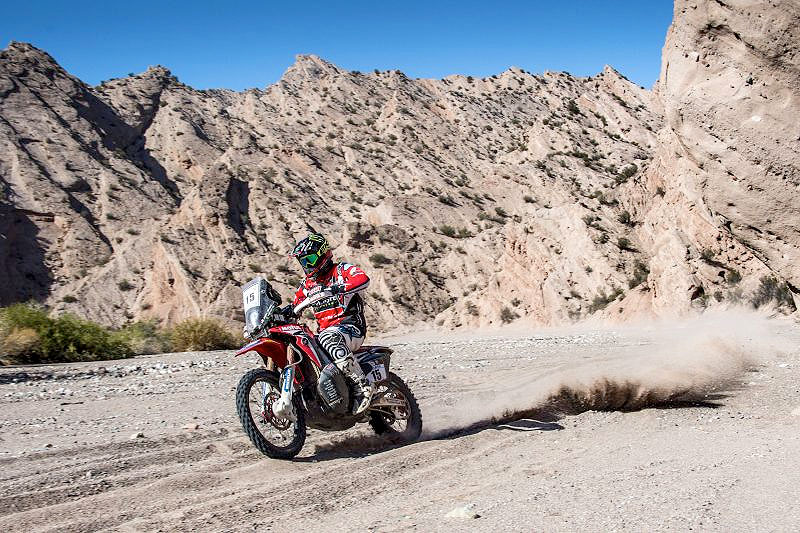 American Ricky Brabec was not a fan of the cold conditions but still finished fourth on stage. Photo: RallyZone - Edoardo Bauer.
GonÌ¤alves' Monster Energy Honda Team-mate Ricky Brabec climbed positions in the overall rankings with a fine ride in spite of the bitterly cold conditions that were far from the Californian‰Ûªs liking. Brabec finished with the fourth best time of the day and tomorrow will seek to secure the fifth spot he currently occupies in the overall standings.

"Today started out really cold. I don‰Ûªt really do well in the cold weather," Brabec explained. "Today was difficult all day. This morning riding in the rocks with frozen hands was really tough for me. I‰Ûªm still cold now even when we are done. I‰Ûªm glad that the stage went really well. We‰Ûªre ready to push for the last day tomorrow. " 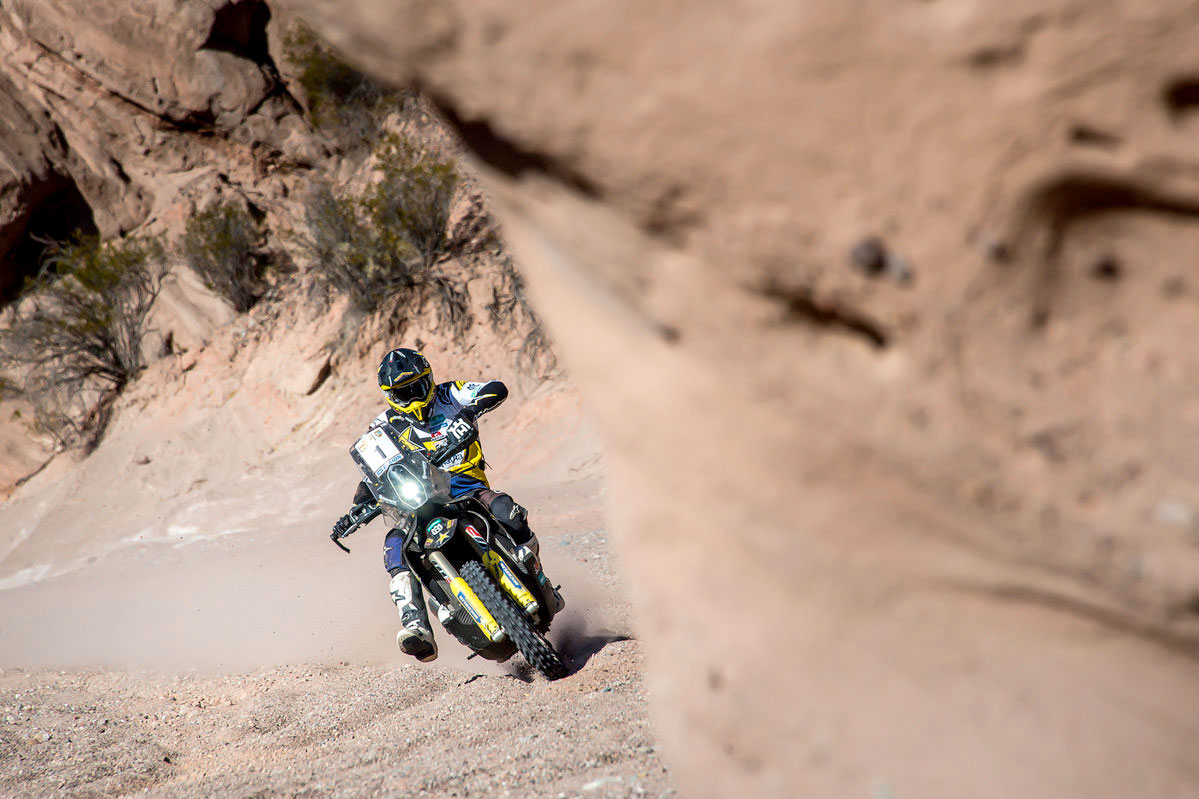 Current World Rally Champion Pablo Quintanilla currently sits in fourth overall after finishing fifth on the penultimate stage. Photo: RallyZone - Edoardo Bauer.
With fifth on stage Pablo Quintanilla has been constant failing to finish outside the top-five in any of the stages contested so far in the Argentinean countryside, the Chilean rally star is currently fourth in the rally‰Ûªs provisional overall standings.

‰ÛÏStage four was tricky," Quintanilla mused. "There were lots of dangerous parts and river beds and it felt like we were playing Russian roulette all the time. I had a small crash in the morning at a dry river and after that I decided to ride my own pace without taking many risks. In these conditions it‰Ûªs just so easy to make a mistake so my goal today was to bring my bike home without making any mistakes. I‰Ûªm happy to have finished this hard day. We only have one stage left at this rally and I will do my best to make up some time to the leading riders.‰Û 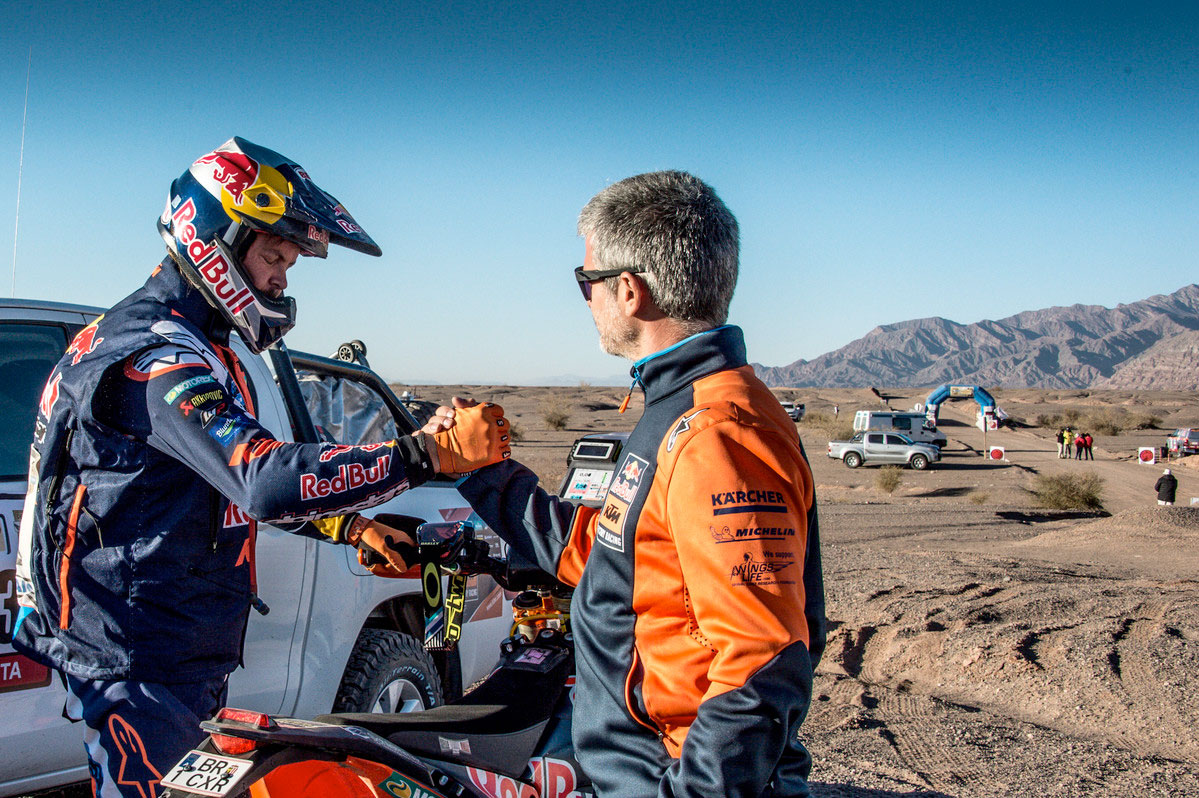 Toby Price needs to make up three and half minutes on the final stage for a win. Photo: RallyZone - Edoardo Bauer
Tomorrow sees the final stage, which will be battle over very varied terrain taking in mountain track, sand filled river bed and high speed off-piste. The stage includes 200 kilometres of timed special out of a total 447-kilometre stage. The start will take place in Villa Union with the rally wrapping up in San Juan. 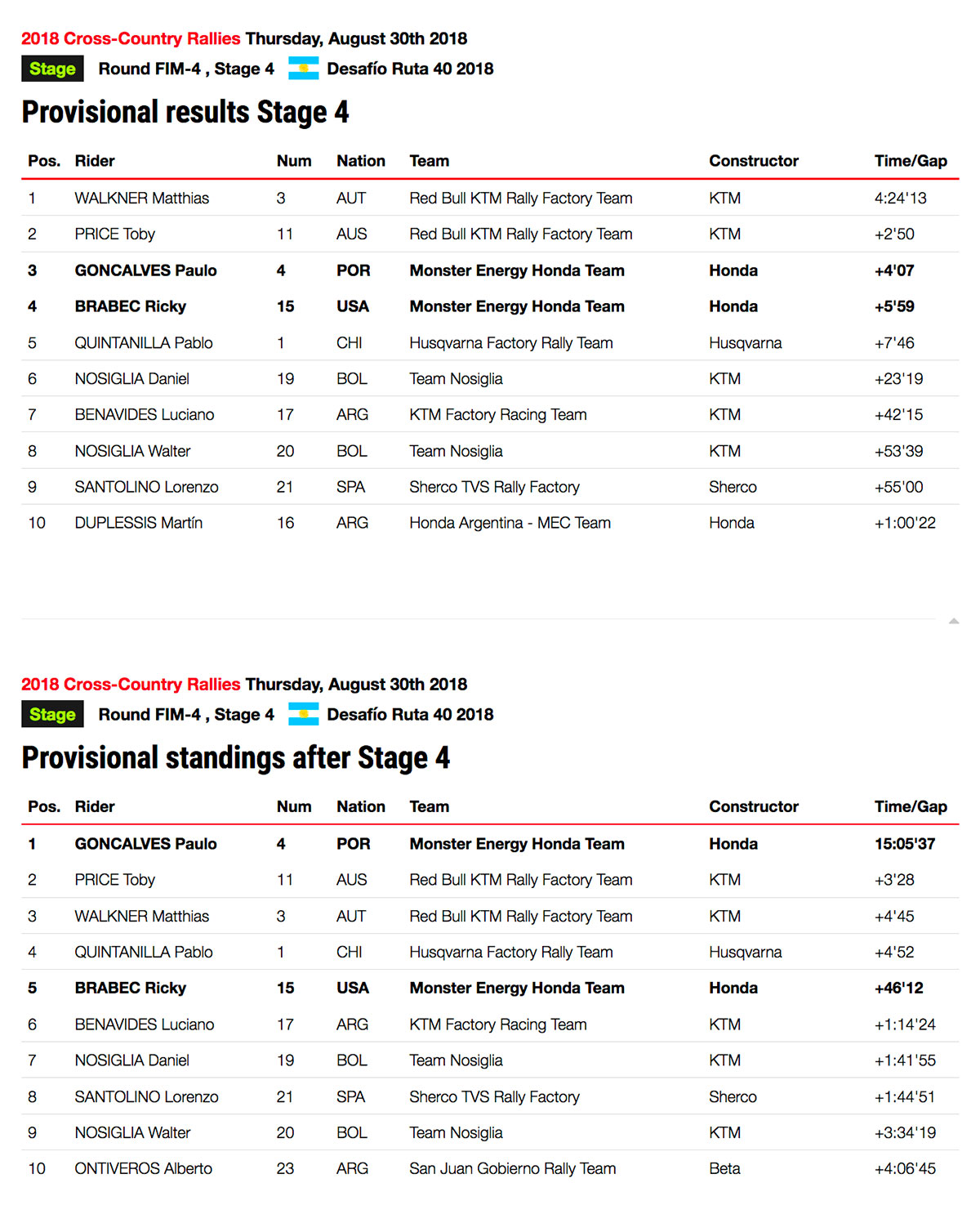