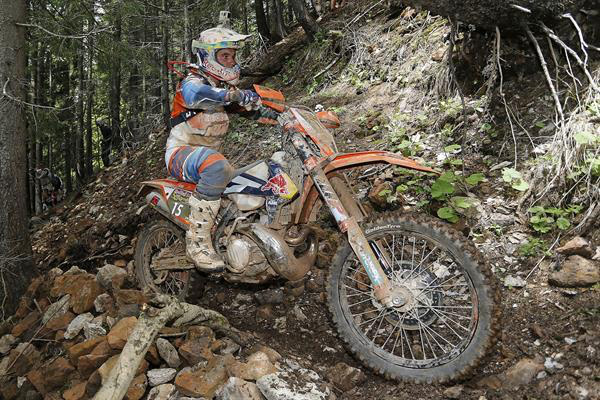 KTM Enduro Factory Racing team riders Jonny Walker and Alfredo Gomez, together with American Cody Webb, will take to the start of the 23rd running of the ErzbergRodeo tomorrow where they join 1‰Ûª500 other competitors all hopeful of qualifying for the iconic Red Bull Hare Scramble.

With three Red Bull Hare Scramble wins to his credit Jonny Walker returns to the Iron Giant this year having been forced to watch the ErzbergRodeo last year following an injury. Fired up and 100% healthy his goal is to challenge for a fourth Hare Scramble crown. Last competing in 2015, Walker did the double ‰ÛÒ posting the fastest time in the prologue before going on to be named as one of four winners together with Graham Jarvis, Andreas Lettenbichler and Alfredo Gomez. Jonny‰Ûªs previous victories came in 2014 and 2012.

‰ÛÏI can‰Ûªt wait to get racing at Erzberg this year. In some ways it feels like this year‰Ûªs race has come around sooner than in previous years, but I‰Ûªm really looking forward to getting back on the mountain and lining up for my first prologue run. Not racing at Erzberg last year due to injury was really tough but being back there a few weeks ago for KTM‰Ûªs 2018 EXC TPI launch was special ‰ÛÒ it was just cool being back there ‰ÛÒ but nothing compares to the atmosphere, the craziness of racing at the ErzbergRodeo.

"No one ever knows what to expect when it comes to the course, the weather and how everything will pan out, but that‰Ûªs part of what makes Erzberg so special and such a huge event. I feel good at the moment and after finishing on the podium at Lagares in Portugal recently I‰Ûªm definitely fired up. The goal for the prologue is the same as always ‰ÛÒ to get safely to the top of the mountain and onto the front row of the start.

"After that it‰Ûªs just to try and make as good a start as possible, keep my head down and keep pushing all the way to the finish.‰Û